The year is 1961. A new president John F Kennedy has just taken oath in the United States, the Soviet Union has put the first man in space

But something equally momentous is happening in Pakistan, where globally renowned physicist Abdus Salam is convincing president Ayub Khan to set up a national space agency, the first in the subcontinent. In September that year, Salam sets up the Space and Upper Atmosphere Research Commission (Suparco) headquartered in Karachi – a full eight years before neighbour India formalises its own space agency.

The initial years of the agency are buoyed by hope. Four top scientists are sent to the Nasa to study space technology and Salam’s growing stature in the scientific world – he would win the Physics Nobel Prize in 1979 – help attract talent to the nascent organisation.

...
The agency is now pinning its hopes on a Mission 2040 – by when it aims to have indigenous satellite making and launching capabilities

In 1962, Suparco launches its first rocket, Rehbar I, from a range off the Karachi coast with help from Nasa, a year before India’s first rocket would blast off from the Thumba launching station.
Pakistan becomes the fourth Asian country to launch rockets after China (DF-1: Dongfang-1, 东方-1号, 100 km , 8 September 1958) Japan (K-6, 60 km altitude, June 1958) and Israel (Shavit II, 52 miles altitude, 6 July 1961).

On 07 June 1962 at 1953 hours the two-stage rocket: Rehbar-I consisting of a Nike-Cajun combination (which was earlier developed by NASA) was successfully launched from Sonmiani Rocket Range. It carried a payload of 80 pounds of sodium and soared to about 130 km into the atmosphere. With the launching of Rehbar-I, Pakistan had the honour of becoming the fourth country in Asia and the eleventh in the world to conduct such a launching. The other countries, which had, until then, already conducted launchings of this type were: USA, USSR, UK, France, Sweden, Italy, Canada, Japan, China and Israel. Rehbar-II was also successfully launched from Sonmiani Rocket Range on 09 June 1962.

The data received from Rehbar-I and Rehbar-II gave scientists information on wind shear and structure in the layers of the upper atmosphere extending beyond the stratosphere. The data collected also helped in the study of cloud formation, cyclones and weather over the Arabian Sea.

The future Space launch vehicle Taimur (three stage solid-fuel, diam. 1.40 m, length ~25 m) can transport a little scientific payload in a Low Earth Orbit. For the Taimur SLV is doubled the first stage of the Shaheen-2.
During the IDEAS 2002 defense exhibition Pakdef spotted two similar models of Pakistani Satellite Launch Vehicles. The first model points out a possible three stage SLV. Judging from other similar SLV's, it is estimated that it can place a payload weighing less than 80 kilogram to an orbit 450 kilometers above Earth's surface. The second model of the SLV seems similar to the first model however, with four extra boosters ( ? Abdali). Exact data are still unknown.
Click to expand...

2017, January 24 -- Pakistan has reported the test-launch of a new missile called "Ababeel". The published images documented that is a Shaheen-III missile, on which was added a powerful third stage. As a result, Pakistan now has a SLV for the transport of orbital payloads. By adding of strap-ons the capacity can be further increased. 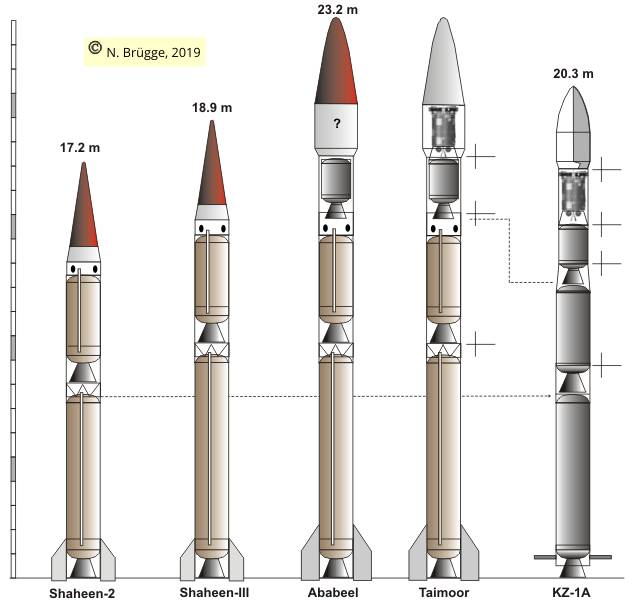 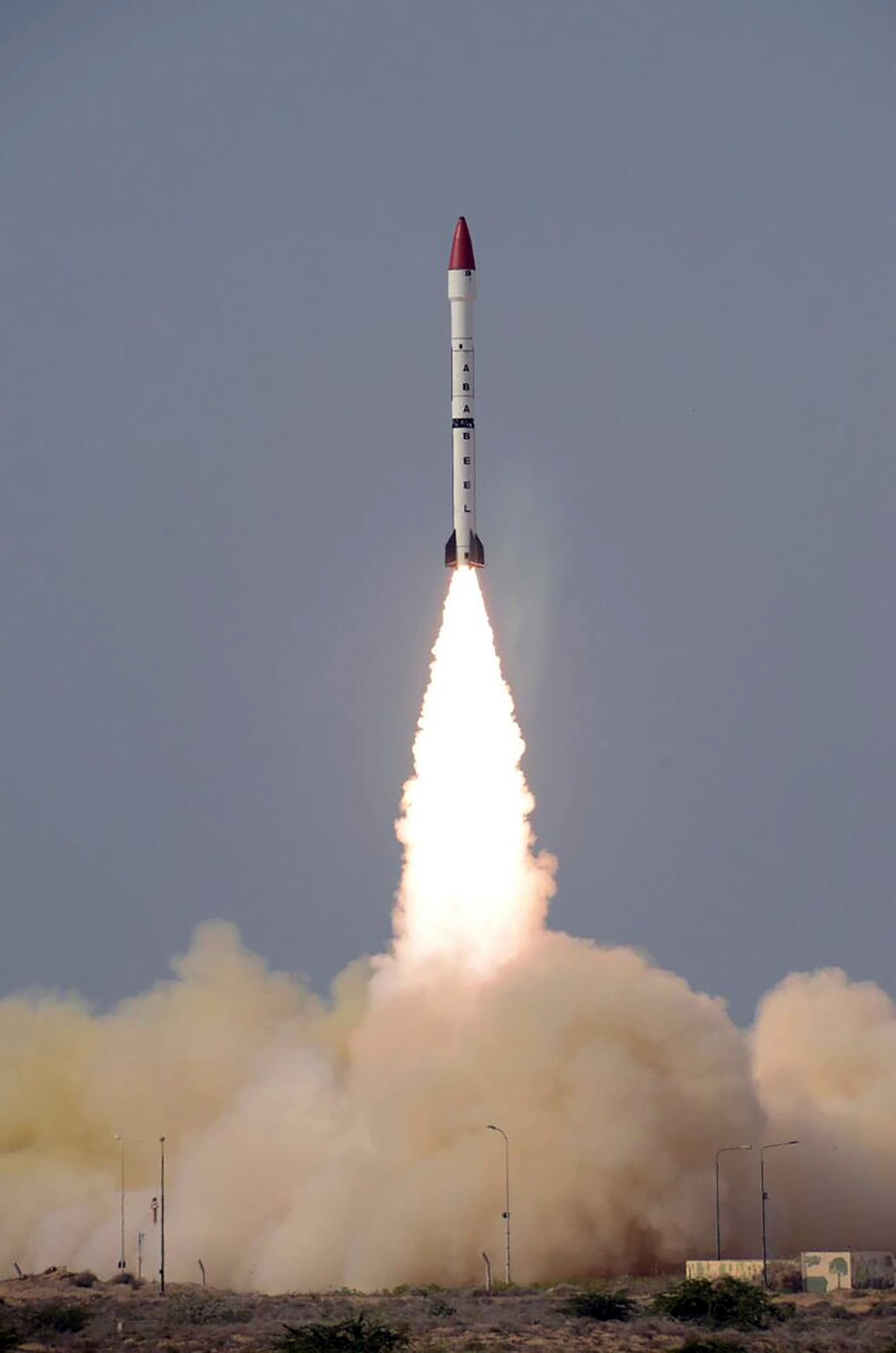 In the next fifteen years Pakistan will continue to meet all challenges...

In addition to these achievements big strides are expected in the conquest of space. The design technology of satellites for different applications has already been achieved and demonstrated. More satellites are expected to be launched in the coming years.
With the acquisition of capability of our own satellite launch systems, our country would become a full-fledged power in space technology.

Suparco is not expected to have indigenous satellite launching and producing technology for at least two decades and the target it has set itself is 2040.


Pakistan's second satellite BADR-B was launched on 10 Dec 2001 at 9:15 a.m from Baikonour Cosmodrome, Kazakistan. The Zenit-2 rocket carried it into a 1018 Km sun-synchronous circular orbit with an orbital period of 105 minutes and inclination of 99.64 degrees.


The satellite structure was made of space qualified aluminum T-6 alloy. Gallium Arsenide (GaAs) solar arrays were used to provide power during the sunlit periods and Nickel Cadmium (NiCd) batteries during the eclipse periods. Earth pointing single axis stabilization was achieved by use of a 6 m gravity gradient boom with a trip mass of 4kg.

Palapa C1 is also known as Paksat 1. It has also been known as Anatolia 1 and HGS-3.

In March 1996, it encountered battery power-supply problems. The four Ku-band transponders cannot be operated when the satelite is in the Earth's shadow. Papala C1 will be moved to the 150.5 degrees east location when Papala C2 is located at 113 degrees east. There was a $32-million insurance payout to cover the partial power failure.

Pasifik Satellite Nusantara (PSN) provides Xpress Connection rural telephone service through Palapa C1. Cost of the very small aperture terminals (VSAT) and satellite service is about $400 per month. Users are charged 10-15 cents per minute. As of January 1997, PSN expected to have installed 700-1000 terminals by April 1997.

The primary charge controller failed on Palapa C1 failed in 1996. As of December 1998, the backup charge controller was not working properly. A failure of both controllers will result is a loss of power during March and September eclipse periods that span 40 days and last from one to 72 minutes. Engineers are investigating the problem.

A Hughes in-house review at the end of 1998 recommended that a standardized design for the HS 601 should be established.

Trade sanctions were imposed on Indonesia in September 1999, but satellites were exempted from these sanctions in October 1999. This allowed Hughes to provide software support for the year 2000 rollover.

It was reported in October 2000 that Turk Telekom was going to assume control of Palapa C1 and relocate it at 50 degrees East longitude in order to maintain rights to that orbital slot.

As of December 2000, Kalitel purchased capacity on Anatolia 1 and resold it to Turk Telekom. It will be moved to 50 degrees East longitude and will resume service in February 2000. The degradation of battery charger capabilities results in 44-day periods twice a year during which the satellite in eclipse without power around midnight in the local coverage zone. This limitation does not significantly impact the useful availability.

It was reported in August 2002 that Pakistan was going to acquire the use of Palapa C1. Hughes Network Services will move Palapa C1 to 38 degrees East longitude and operate the satellite for Pakistan under a 5-year contract worth about $30 million. Palapa C1 will be renamed Paksat 1.

It was reported in October 2003 that the Pakistan space agency had a $9.1 million, five-year lease on Palapa C1 (Paksat 1).

It was reported in March 2007 that Paksat 1's operating time while in the Earth's shadow is limited due to defective batteries. Paksat 1 is operated by Pakistan's Suparco - Space and Upper Atmosphere Research Commission.

It was reported in October 2013 that Palapa C1 disposal orbit is slightly below the graveyard orbit of 250-kilometers above the geostationary orbit.

The satellite will be deployed at 380E in the Geo-stationary orbit and it will replace the existing satellite PAKSAT-1.

Earlier, the contract for the development of PAKSAT-1R was signed between Pakistan Space and Upper Atmosphere Research Commission (SUPARCO) and China Great Wall Industry Corporation (CGWIC) in October 2008 during the visit of the President of Pakistan to China.

Pakistan is striving to deepen space related cooperation with its time tested and old friend China.

Now we are developing the first-ever remote sensing satellite with the Chinese cooperation, which will be launched in March 2018.

On April 13, 2017, Wang Zhaoyao, Director of the China Astronautics and Aerospace Engineering Office, held a working meeting with Chairman of the Pakistan Space and Upper Atmosphere Research Council, Major General Qaiser Anees Khurrum.
Astronaut selection and training and other relevant cooperation with the Chinese side were discussed.
The two sides agreed to sign the cooperation framework agreement and set up a joint working group.