Yes, Orbiter 2016 bases and markers are off. All of them I think Or at least not precise enough.

So cool. Thanks guys.
Are there any attempts to do ‘Artemis’ missions following the steps of Apollo ?
S

This is a great addon! Thanks

Is it me or loading the new landing sites overwrite the Apollo sites ?
F

Working brilliantly in Orbiter 2016 and Mac.

Some improvements I would suggest would be adding a 20% thrust loss failure for Apollo 13 at T+5 minutes and 30 seconds to simulate the early center engine shutdown, and making it so that jettisoning the service module and LM in an Apollo 13 type scenario would not count as an aborted flight condition since that silences any soundpack you have installed for Apollo 13.

I just tried climbing Cone Crater and it becomes impossible once you get to the final climb, since the slope reaches ~15 degrees and the AMSO astronauts simply cannot handle it. They end up jumping in place and not making any more progress.
M

into surface of the moon

Could you check that these are set correctly and if it still sinks into a terrain then could you take a screen shot.

Hi there! I'm new here so I've that problem... I can't find "Experimental lunar surface interpolation" add a sreenshoot
B 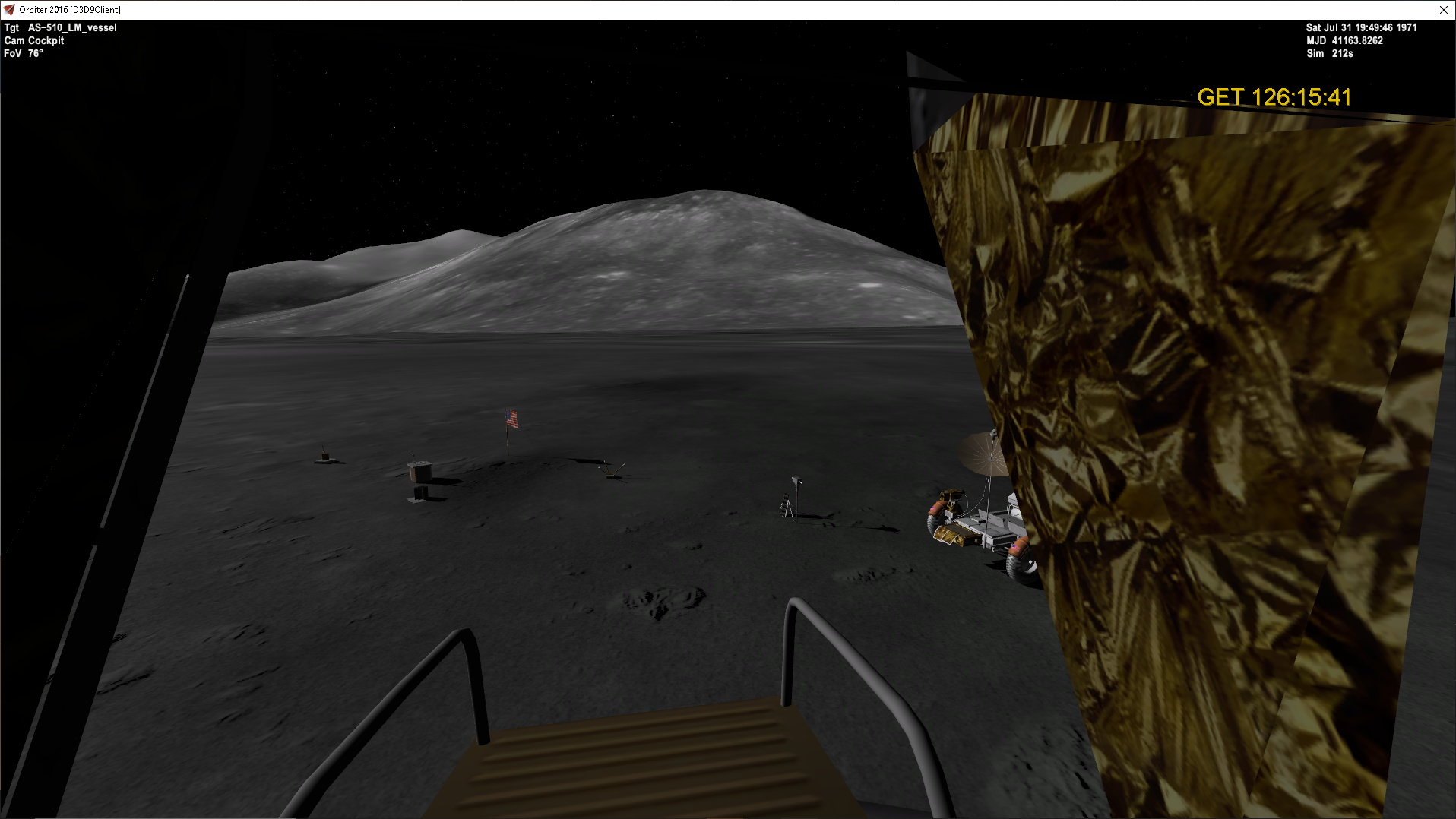 I know I am facing the wrong way during the real flight but this view is better IMO
Last edited: Jun 26, 2020
M

I downloaded manuals from this website using the wayback machine. http www.geocities.com bob and repont space pdf.htm I grabbed all the Apollo ones and all the historical ones!
Last edited: Jun 30, 2020

I really appreciate this fantastic addon being ported for Orbiter 2016! Thank you so very much ACSoft!

I'm looking for the Orbiter 2006 version of AMSO!


I think I still have this version...
Write me a PM with your mail and I'll send it to you... :tiphat:
S

Good day. Who knows where to find the scenario Apollo-Venus?

Spaceuser said:
Good day. Who knows where to find the scenario Apollo-Venus?
Click to expand...

I don't know, but if you're skilled with TransX/IMFD, you can possibly recreate this mission with the information in this video. It has pretty detailed information on encounter times.
[ame="https://www.youtube.com/watch?v=8so2l-quSMg"]YouTube[/ame]

Spaceuser said:
Good day. Who knows where to find the scenario Apollo-Venus?
Click to expand...

The astronauts would, of course, be dead from radiation...

JonnyBGoode said:
The astronauts would, of course, be dead from radiation...
Click to expand...

Not necessarily. Most of the AAP reports on Apollo hardware to Venus or Mars were from the late 1960s, and thus used the understanding of solar radiation from that time, however radiation is a consideration in most of the reports.

We're getting sonewhat off topic for this thread here though.

CTarana45 said:
I'm looking for the Orbiter 2006 version of AMSO!