I recently been reading into some news article via yahoo news, and CNN. 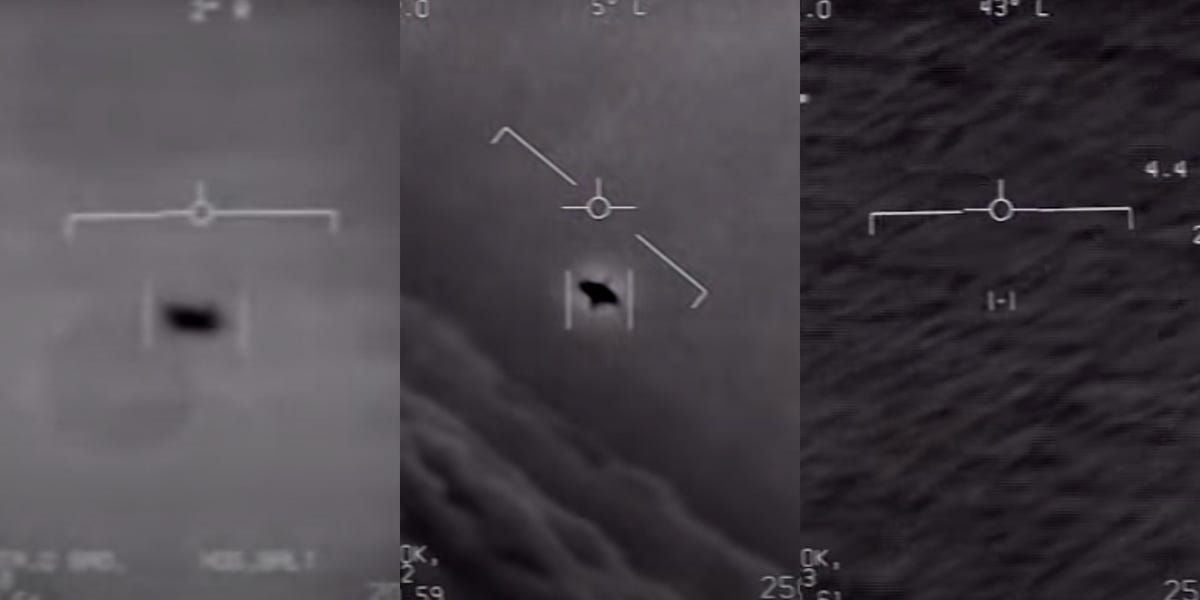 The Pentagon released 3 videos of UFOs spotted by Navy aircraft, and a senator who investigated it says this 'only scratches the surface' 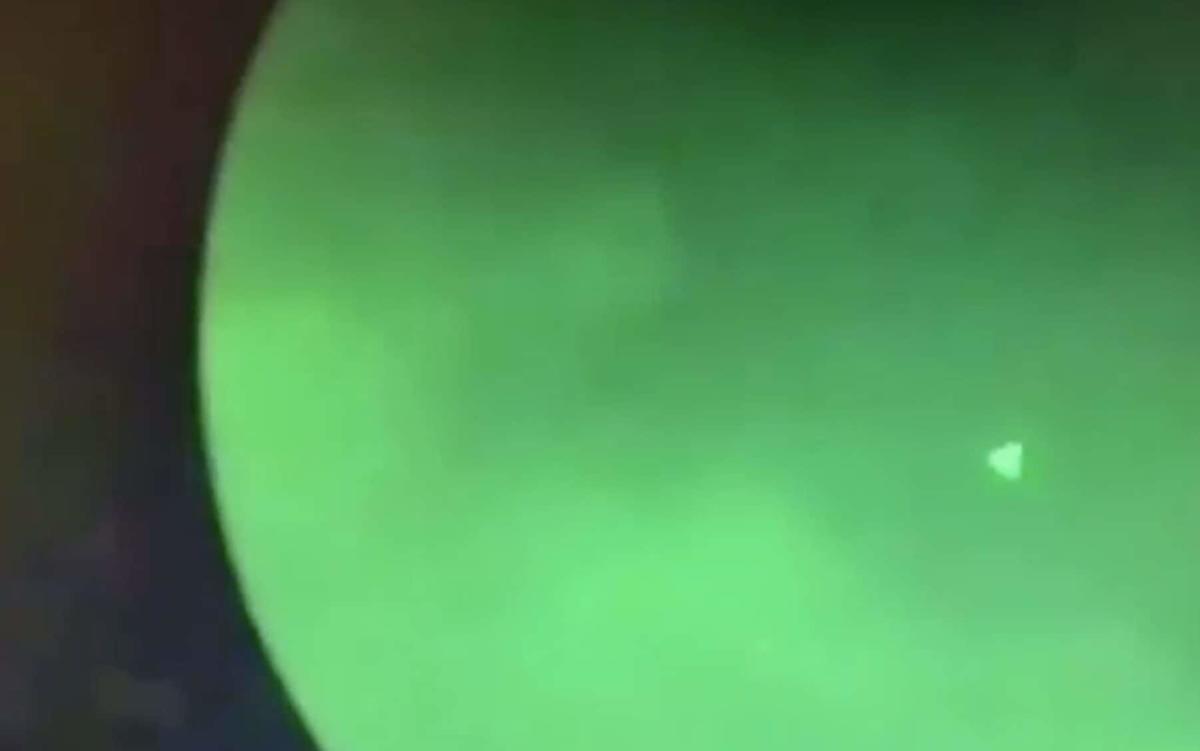 The Pentagon is investigating bizarre images of flashing pyramid-shaped UFOs spotted over a US Navy destroyer off the coast of California. Leaked videos showed at least three of the unidentified pulsating objects moving, sometimes in unison, above the USS Russell in July 2019. They were filmed...

While these clips are more than a decade old, does anybody have much of a thought what they could be, I guess nobody can much of an answer, I saw a recent, which is more recent in age, one where there are triangle objects moving around.

I'd guess they could be trash flying around, obviously there would need to be some evidence as to how those objects were floating about high in the sky.

Unless the Pentagon or government can confirm what they are, i doubt there could be anything some prefer to believe.

Most of us don't know the toilet system, or how much water we used to flush it. I hope that thing has indoor plumbing, because Commander Armstrong didn't.?

Well, the triangle is due to the video being out of focus .

The simplest answer is that some country has really nice drones.

Other than that, we enter the real of the unexplained! I'd rule out aliens due to the distances involved.
Alternate universes make more sense! An alternate Earth, where science evolved more. There's no distance or time travel involved - the alternate earth is exactly on the same place as ours. Geology is the same, landscape is the same, only difference is human history after the point of divergence. And yes, humans would be similar, but since history was different there would be no doubles.

One of the main problems with the idea of it being a spacecraft is, there is already the International space station, if anything the crew would of already seen something or more than one moving around in orbit, surely. Even that could be discounted, since the Earth is quite large, and there is only much one can see from orbit from a space station with some round or up and down positioned windows as the station has. Almost like being under water. Perhaps even detect signals, interference in a vicinity.

Prior to me knowing anything about orbiter sim, still don't, but it teaches anybody at least that the distance between places, and the procedure to get somewhere is complex, time, and energy, light, so on, movement of the objects, and all that, it really is touch and go. Buzz Aldrin said in 2013, if there was some life needing to travel, it would need to be desperate. Nobody just jumps in a shuttle pod or shuttle triangle, travels twenty eight light years for nothing. LOL

That is far enough!

While his other colleague, believed that there was some sort of life, but not conclusive on it, Mr Mitchell, now I don't know what he meant about all that, but that was his ideas, I guess.

Could the triangle, not simply be debris move around by the wind environment, and what ever else goes on, up there, it could be a test probe, the articles do mention that, it doesn't harm American security, so in theory the pilot may of simply been at a particular time of such a mini mission going on.

An alternative universe up in the stratosphere?

Triangle shaped?? MUST be a DeltaGlider! Only question left: DeltaGlider or DG-S?

I haven't used orbiter in five years, I even forgot about that. Good eyes there.?

I believed this to be aliens spying around the skies when I saw similar videos a year ago. Later I thought they may be some silly drones instead of alien spaceships (wrongly called UFOs).

You may forget this, but there were news of a strange monolith popping in and out of existence on Earth. It was first noticed in Utah, later disappeared from the place and reappeared in California. The monolith also appeared in Ahmedabad, India. I thought the structure must be an alien invention. This led me to believe the previous thoughts on the declassified footages.

In recent postings of sixty minutes and CNN, there is some on this.

Some mentioned it could be radar problems.

The video was recorded July 2019 by Navy aircraft, according to filmmaker Jeremy Corbell.

Considering these videos date from 2004, the question is were those objects seen prior to that, and with the enhanced sensor capability showed these objects with detail. And with the pilot who saw it head on, it just moved with speed, so these objects circled the plane at a distance but there is no chance of seeing anything up close. Loitering and evading.

What is known as project bluebook, seventy years back, mentioned similar objects like what was leaked to the washington times, but claimed it was German technology from around 1948. So most if not all reportings due to the advancement of air flight by that time tend to describe similar objects.

So sightings seen off the coast of California in 2004 and Virginia 2014. Seen every day for two years claims one pilot, two pilots seeing them four member crews out of two planes, out of a squadron.

Then 2019 a navy ship off the coast of California sees a triangle.

I warned above that the U.S. Navy is Lovecraft fans
https://www.mirror.co.uk/news/us-news/mystery-speeding-objects-detected-underwater-24173342
Last edited: May 25, 2021

So it could whizz around the planet perhaps at twice the speed as a typical spacecraft would.

What about Mars, going through such a thin atmosphere, it would be very fast.

Richfromengland said:
13,000 miles per hour in the sky, not as fast as orbiting the planet.

So it could whizz around the planet perhaps at twice the speed as a typical spacecraft would.
Click to expand...

Hmm, so the object would need travel less than 5,000 miles per hour to be an X15. So an X15 is the closest to the speed, but not the way it moves or slow downs according to the pilot.

Obviously, nobody could survive 13,000 miles per hour within the sky, the forces would so strong.

Richfromengland said:
Hmm, so the object would need travel less than 5,000 miles per hour to be an X15. So an X15 is the closest to the speed, but not the way it moves or slow downs according to the pilot.

Obviously, nobody could survive 13,000 miles per hour within the sky, the forces would so strong.
Click to expand...

It seems you are forgetting the Space Shuttle, it actually "flew" faster than that. Really depends where you put the "sky" limit. Currently US military use the X-37, an orbital drone spaceplane. Also Apollo or even Zond capsules survived faster than that returning from lunar trajectories.

If you mean "at sea level" yes, it is impossible, there's too much friction and any matter will disintegrate. Unless you have some kind of magical protective forcefield (you'll still need insanely powerful engines to counter the friction and keep your speed). So what really matter is air density and therefore altitude.

Sure, but any spacecraft orbits the planet about 17,500, it could be less and more if you would count a trip to the moon, I think now, or Mars. But who can build an object that does all that below the atmosphere, if the closest is an X15 aircraft. The object just stopped and then went another direction, and could also work out where the fighter jets were going in advanced. So the pilots had no chance of getting close if they could.

Now users on the web via the news channel claim the videos aren't accurate, or they are simply error reports. But the fact that there is actual pilots themselves along with some evidence makes the report more credible.

As with project blue book which ended decades back, but the subject itself never ended, all reports of fast objects were simply reported to be from another country.

attempts to reach the "Lake Vostok" continue (presumably the organisms living there have not been in contact with ordinary organisms for 800 million years, they can be called alien) Yeah, no idea about that.

Harry Reid was certainly a figure in this subject, considering he's from Nevada.

One person interviewed on cbs said well the objects may be from here, but from a different time, or transported from one different dimension.?

May 10, 2020
Linguofreak
L
V
Greetings from the Northwest USA!

Iridium-NEXT and the end of the Iridium flares