"NanoSail-D has lowered its altitude above the Earth by approximately 28 miles (45 kilometers) from its original altitude of 400 miles (640 kilometers), and continues to descend," said Dean Alhorn, principal investigator for the NanoSail-D mission at Marshall. "Prior to launch, our original de-orbit analysis was based on a maximum drag attitude, which meant NanoSail-D would de-orbit in 70-120 days. Based upon NASA's current analytical assessments of the NanoSail-D tracking data, the team predicts NanoSail-D will continue to descend and eventually re-enter Earth's atmosphere and disintegrate six months to one year from sail deployment."

As NanoSail-D continues to descend, the large tent size sail will become even more visible to novice and veteran sky watchers. North American viewing opportunities will begin again in the early evening of April 27 and continue for 10-14 days. Since the satellite’s attitude is flat and the sail is highly reflective, the best conditions for viewing NanoSail-D are passes to the west of the viewer’s location.

Space around Earth is anything but a barren vacuum. The area seethes with electric and magnetic fields that change constantly. Charged particles flow through, moving energy around, creating electric currents, and producing the aurora. Many of these particles stream in from the solar wind, starting out 93 million miles away on the surface of the sun. But some areas are dominated by particles of a more local source: Earth's atmosphere.

These are the particles being watched by FASTSAT’s Miniature Imager for Neutral Ionospheric Atoms and Magnetospheric Electrons (MINI-ME) instrument. For one well-defined event, scientists have compared MINI-ME's observations to those from two other instruments. The event shows a detailed picture of this dynamic region, with a host of interrelated phenomena -- such as electric current and outflowing particles – occurring together.

"We're seeing structures that are fairly consistent throughout a handful of instruments," says Michael Collier at NASA's Goddard Space Flight Center in Greenbelt, Md., who is the principal investigator for MINI-ME. "We put all of these observations together and it tells a story greater than the sum of its parts."

Unlike the hotter hydrogen coming from the sun, Earth’s upper atmosphere generally supplies cooler oxygen ions that course outward along Earth's magnetic field lines. This "ion outflow" occurs continuously, but is especially strong during periods when there is more solar activity such as solar flares and coronal mass ejections that burst off the sun and move toward Earth. Such activity drives oxygen ions out of our planet’s upper atmosphere, particularly in regions where aurora displays are strong.

"These ion outflow events are important because they help us understand the space weather environment around Earth," says Goddard's Doug Rowland who is the principal investigator for FASTSAT's Plasma Impedance Spectrum Analyzer, or PISA instrument. "The heavy ions flowing away from Earth can act as a brake, or damper, on incoming energy from the solar wind. The flow also indicates ways in which planets can lose their atmospheres – something that happens slowly on Earth, but more quickly on smaller planets with weaker magnetic fields, like Mars."

MINI-ME has been successfully spotting such outflows since the instrument first began to collect data in the winter of 2010. The instrument counts ions as it moves through a part of Earth's atmosphere called the ionosphere. This is the region where the particles gain enough speed and energy to overcome Earth's gravity, so it's an ideal place to study the first step in the outflow process.

Late on March 31, 2011, the FASTSAT spacecraft flew through an ion outflow with well-defined areas of increased fast moving, or "energetic," particles.

Simultaneous observations from PISA, which measures the density of material in the atmosphere, also showed that this was a highly structured auroral zone. In addition, the scientists turned to the National Science Foundation's Active Magnetosphere and Planetary Electrodynamics Response Experiment (AMPERE), a mission managed by the Johns Hopkins Applied Physics Laboratory, which measures current flow and magnetic features through a network of instruments placed on commercial satellites owned by Iridium Communications. AMPERE data showed current structures that were also consistent with what is expected for an auroral zone.

"This is just one event," says Collier. "But it helps confirm the idea that the current and ion-outflows are all connected. As we continue to go through the data, there will be many more events to follow. We'd like to be able to pin down the origin of all these mechanisms in the ionosphere."

Over time, data like this will allow scientists to determine where these ions come from, what drives them, and how their intensity varies with incoming solar activity.

After spending more than 240 days "sailing" around the Earth, NASA's NanoSail-D -- a nanosatellite that deployed NASA's first-ever solar sail in low-Earth orbit -- has successfully completed its Earth orbiting mission.

Launched to space Nov 19, 2011 as a payload on NASA's FASTSAT, a small satellite, NanoSail-D's sail deployed on Jan. 20.

The flight phase of the mission successfully demonstrated a deorbit capability that could potentially be used to bring down decommissioned satellites and space debris by re-entering and totally burning up in the Earth's atmosphere. The team continues to analyze the orbital data to determine how future satellites can use this new technology.

A main objective of the NanoSail-D mission was to demonstrate and test the deorbiting capabilities of a large low mass high surface area sail.

"The NanoSail-D mission produced a wealth of data that will be useful in understanding how these types of passive deorbit devices react to the upper atmosphere," said Joe Casas, FASTSAT project scientist at NASA's Marshall Space Flight Center in Huntsville, Ala. 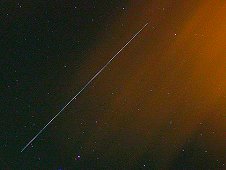 "The data collected from the mission is being evaluated, said Casas, in conjunction with data from FASTSAT science experiments intended to study and better understand the drag influences of Earth's upper atmosphere on satellite orbital re-entry."

"The final rate of descent depended on the nature of solar activity, the density of the atmosphere surrounding NanoSail-D and the angle of the sail to the orbital track," said Dean Alhorn, principal investigator for NanoSail-D at Marshall Space Flight Center. "It is astounding to see how the satellite reacted to the sun's solar pressure. The recent solar flares increased the drag and brought the nanosatellite back home quickly."

NanoSail-D orbited the Earth for 240 days performing well beyond expectations and burned up during reentry to Earth's atmosphere on Sept. 17.

NASA formed a partnership with Spaceweather.com to engage the amateur astronomy community to submit images of the orbiting NanoSail-D solar sail during the flight phase of the mission. NanoSail-D was a very elusive target to spot in the night sky -- at times very bright and other times difficult to see at all. Many ground observations were made over the course of the mission. The imaging challenge concluded with NanoSail-D's deorbit. Winners will be announced in early 2012.

After two successful years of on-orbit operations, NASA's Fast, Affordable, Science and Technology Satellite, or FASTSAT, mission is coming to an end. FASTSAT successfully demonstrated a capability to build, deploy and operate a science and technology flight mission at lower costs than previously possible.