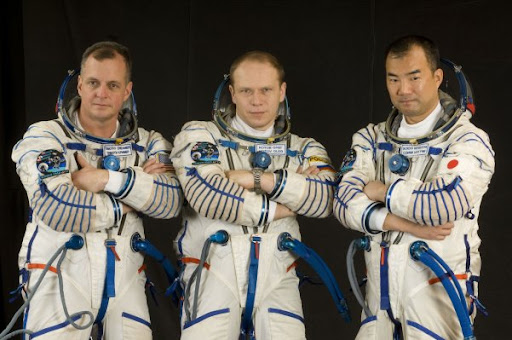 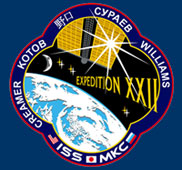 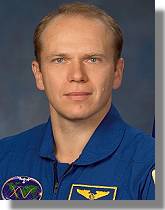 In 1982 Dr. Kotov finished high school in Moscow and entered the Kirov Military Medical Academy, from which he graduated in 1988. Afterwards, Dr. Kotov served at the Gagarin Cosmonaut Training Center, where he held the positions of Deputy lead test-doctor and Lead test doctor. n March 1998, he received a test-cosmonaut qualification.

In 2007, Dr. Kotov served a six month tour of duty as a flight engineer and Soyuz commander on the Expedition-15 mission to the International Space Station. 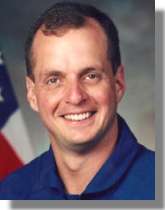 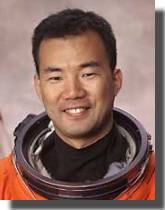 STS-114 Discovery (July 26-August 9, 2005) was the Return to Flight mission during which the Shuttle docked with the International Space Station and the crew tested and evaluated new procedures for flight safety and Shuttle inspection and repair techniques. Noguchi served as MS-1 and EV-1 and performed 3 EVAs (spacewalks) totaling 20 hours and 5 minutes.

The back-up crew of the Soyuz TMA-17 consists of 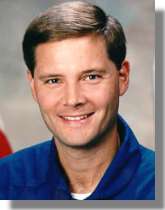 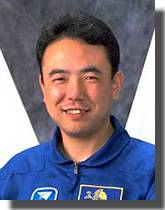 The Soyuz 21 craft commanded by Kotov will launch from Baikonur on Dec. 21, and deliver him, Creamer and Noguchi to the station, with docking to the Zarya control module's Earthfacing port.

There are no U.S.-based spacewalks currently scheduled for Expedition 21 or 22. However, Suraev and Kotov will don Russian Orlan spacesuits in January for the station's 24th Russian spacewalk. It will be Kotov's third spacewalk and Suraev's first. The focus of the spacewalk will be the Russian segment's Mini-Research Module 2 (MRM2), which is scheduled to dock to the station in November and will provide an additional docking port and airlock on the station. Kotov and Suraev will be preparing the module by installing a docking target on its exterior and connecting an antenna that will be used to guide approaching vehicles to the larger antenna system on the Zvezda service module. They'll also lay cables to connect the module to the station's Ethernet system and install handrails on the hatches that will be used for spacewalks.

Williams and Suraev are scheduled to relocate their Soyuz to the newly connected MRM2 in January, making room at Zvezda's aft port for the Progress 36 cargo vehicle in February. During three months together as a crew of five, Williams, Suraev, Kotov, Creamer and Noguchi will continue station research and outfitting activities, using Canadarm2 to move Pressurized Mating Adapter 3 from its current location on the port side of the Harmony module to Harmony's Earth-facing common berthing mechanism port, and transferring External Stowage Platform 3 to the opposite side of the station's truss structure. They'll also complete unloading of the HTV cargo vehicle, load it with refuse, and, using Canadarm2, unberth it from the station and set it adrift so that flight controllers in Japan can command it to reenter the Earth's atmosphere and be destroyed.

Noguchi and Creamer also will assemble and check out the new JAXA Small Fine Arm (SFA) and install the Kibo airlock's depressurization pump, which will allow experiments to be installed and tested on the Kibo "back porch," also known as the Japanese External Facility (JEF). The Small Fine Arm will be used to manipulate experiments on the JEF. Based on robot arm technologies and operation experience from the Manipulator Flight Demonstration conducted on STS-85 in 1997, the SFA includes a 5-foot-long arm with six joints, a tool mechanism and a camera. It was designed so that it could pass through the Kibo airlock for repair and maintenance inside Kibo.

In January, one of the station's new commercial resupply rockets, built by Space Exploration Technologies Corp. (SpaceX), will make its first demonstration flight. The station crew will not be involved in the mission, but it will mark an important milestone in providing additional supply lines for the station.

Also during this period, another Progress resupply exchange is planned. Progress 35 is scheduled to undock from the Pirs docking compartment on Feb. 2. The next Russian cargo shot, Progress 37, will launch from Baikonur and dock with the aft Zvezda port in April.

Another shuttle mission in February, STS-130, will deliver the final pressurized U.S. module, Tranquility, and its seven-window cupola. Tranquility will be installed on the newly vacated port berthing mechanism, and spacewalkers will connects its external utilities over the course of three spacewalks.

The shuttle and station crews will work together to integrate regenerative life support systems into the new Tranquility module, which will become the station's utility and exercise room. They will move the Air Revitalization System and its carbon dioxide removal equipment, the aste and Hygiene Compartment toilet system, the Water Recovery System, the Oxygen Generation System, the Advanced Resistive Exercise Device, the COLBERT treadmill and a crew quarters rack into the newly arrived Tranquility module, freeing up much needed research space in the Destiny Laboratory.

Williams will hand over command of the station to Kotov, and then he and Suraev will depart the station in their Soyuz, with landing in Kazakhstan set for March 18, 2010.

The next expedition crew members are set to arrive at the station in early April.

Mission: Flying the ISS Expedition 22/23 crew members aboard the ISS

* 1st two-burn manoeuvre
No code has to be inserted here.

* 2nd one-burn correction
No code has to be inserted here.

The input for the on-board rendez-vous system is given 3 hours before docking in form of state vectors of the spacecraft and the ISS.

TBD after arrival at the targeting point, at orbit 33.

5. Docking to the ISS

The vehicle's reliability statistics according to http://www.spacelaunchreport.com/reliability2009.txt:

The crewmembers during the second preflight training 16.12.2009

Transporting the payload assembly for mating with the launcher 16.12.2009

Roll-out and erection on the launch complex


The crews arrive at Baikonur


Soyuz-FG's rolling out and erection

Sunrise/Sunset and associated twilight times for Baikonur on Monday, December 21, 2009

NASA TV Schedule for December 20 (the times are in EST):

I am looking forward to this. Thank you for posting, as always.

Be sure to watch the coverage.

The van transporting the crew has arrived.

After a short farewell, they are embarking the elevator.

ISS On-Orbit Status 12/19/09
During loading, a shroud separation sensor was physically impacted and damaged, but it is redundant and its operation is not required for launch (its telemetry was disabled), according to TsUP-Moscow (Mark Bowman).
Click to expand...

Ingression is over. Notice the black cat on the rope, Oleg's mascot. 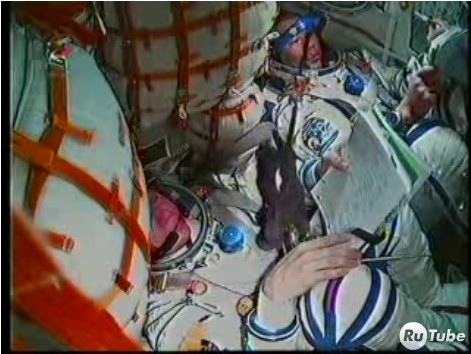 The launch pad service structure's halves are to be lowered in 2 minutes (at 0:07) 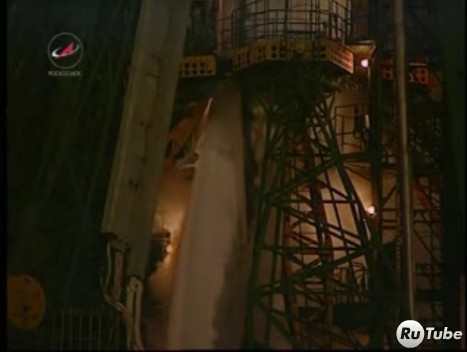 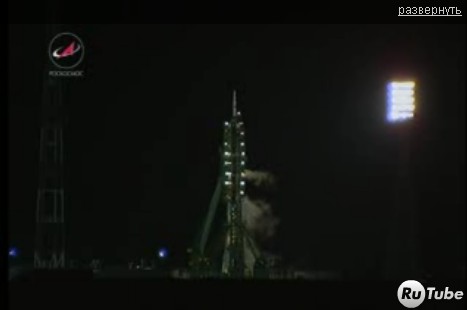 Ground: why is your cat misbehaving?
Kotov: it's his job. 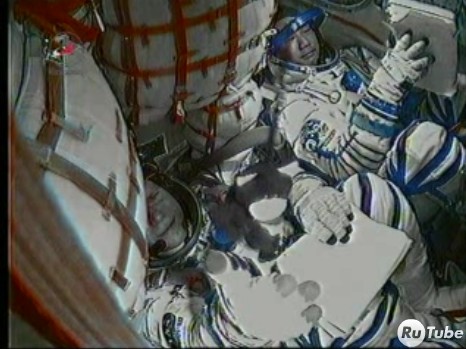 A traditional musical farewell is played for the crew.

(it's audible on TSENKI) 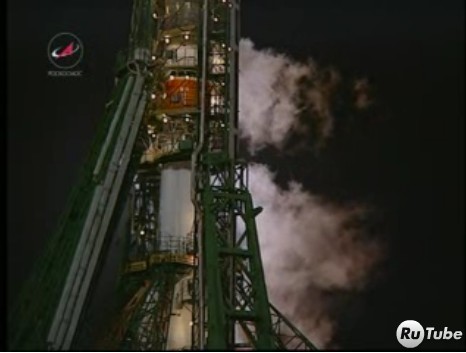 Halves of the service structure are lowering. Some interesting bits of trivia about this mission:

. This will be the first EVER Soyuz launch to occur during a winter night!

. This mission will be the last ever time that a Soyuz will dock at the nadir port of Zarya.

The escape tower is armed.

I sent a good luck E-Mail to Tm Creamer last night, and he replied to it just this morning!
Very cool! :thumbup:

Orbinaut Pete said:
This will be the first EVER Soyuz launch to occur during a winter night!
Click to expand... 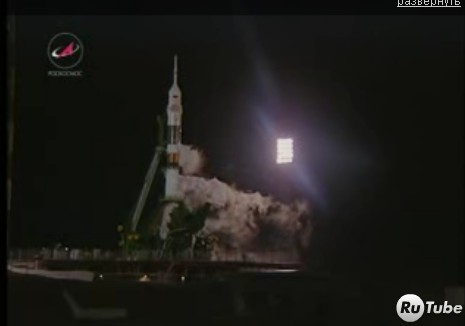 Is the glass half-full or half-emty?

The crew are commanded to lower their visors 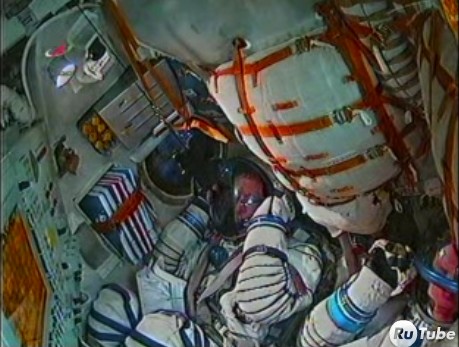 Key to start command passed. The launch sequence is initiated. 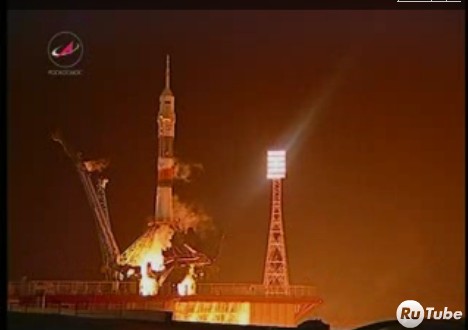 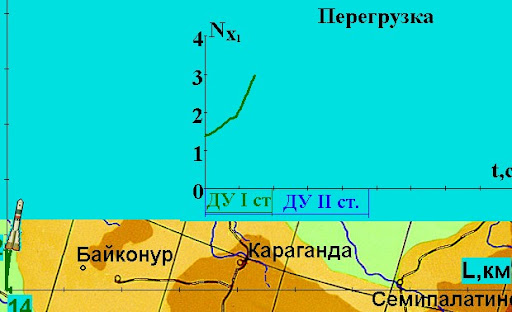 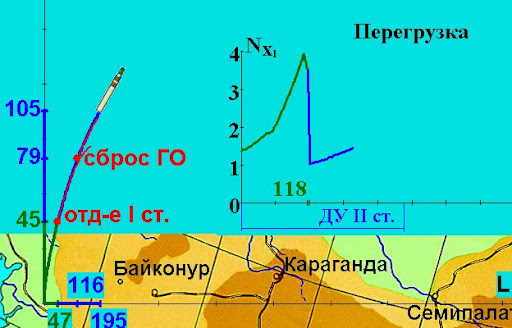 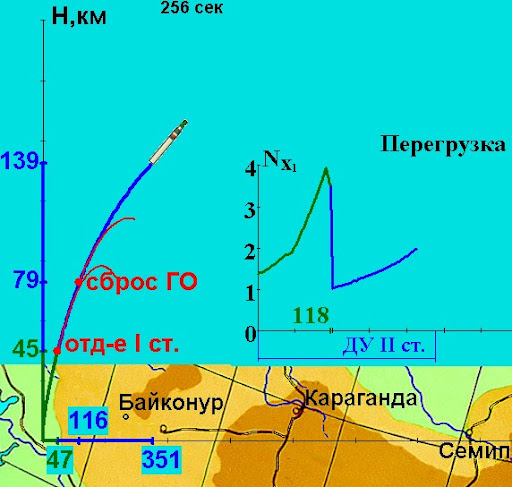 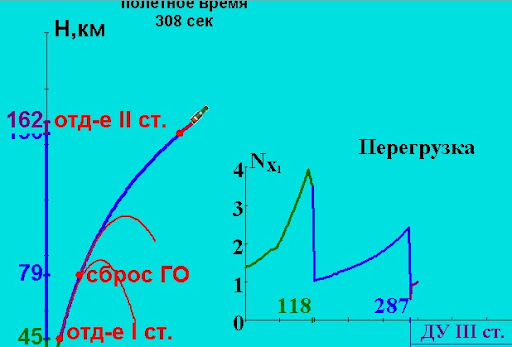 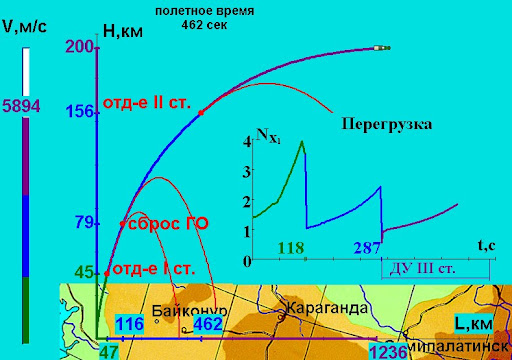 We have the spacecraft's separation! 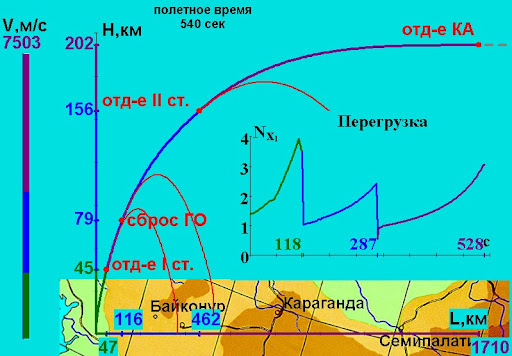 Control is passed to TSUP Moscow. 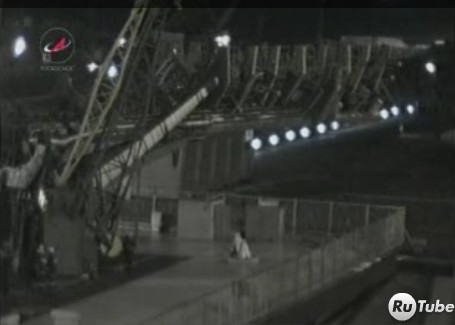 Congratulations to Oleg, Tim and Soichi san for their ascent to space!
Ground, keep up the good work.

Flight of Soyuz TMA-17 can now be tracked at
http://www.mcc.rsa.ru/model.htm

Everybody here, thank you a lot for your support.

I missed the launch by 15 seconds or so, but thanks to your timely postings, I was able to run and catch most of the acsent to orbit. Thanks a bunch, I'd never watched the Soyuz process before. Seen a few launches on youtube though.

Manual maneuver to +Y to Sun and initiate a 2 deg/sec yaw
rotation. MCS is deactivated after rate is established.

SiberianTiger said:
Is the glass half-full or half-empty?
Click to expand...

It's space, glasses are useless! :rofl:

Some hi-res photos of the Soyuz TMA-17 launch can be found here:


PhantomCruiser said:
I missed the launch by 15 seconds or so, but thanks to your timely postings, I was able to run and catch most of the acsent to orbit. Thanks a bunch, I'd never watched the Soyuz process before. Seen a few launches on youtube though.
Click to expand...

Some hi-res photos of the Soyuz TMA-17 launch can be found here:

Auto maneuver to burn attitude (TIG - 8 min) while LOS
Rendezvous burn while LOS
Manual maneuver to +Y to Sun and initiate a 2 deg/sec yaw
rotation. MCS is deactivated after rate is established.

The ground track simulation screenshot as of 19:38 UTC 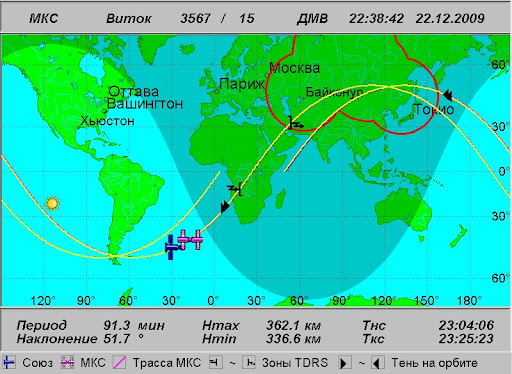 Referential table for time, distance and relative velocity during approach (according to the approach chart):