The image is doctored, but the reality looks not worse.

Even so, it's better than nothing.

What the heck is this thing doing? 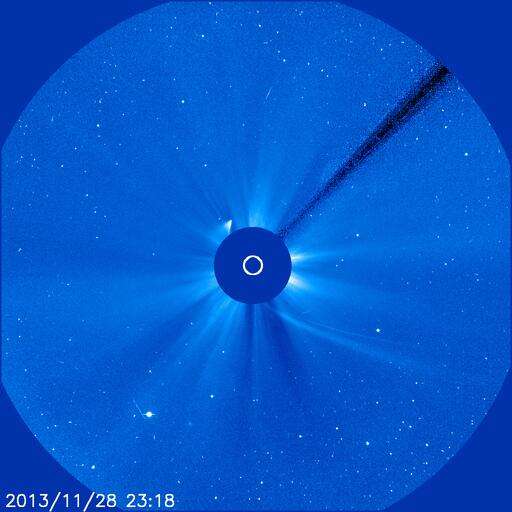 Sungrazer Comets Twitter- "The more images we see, the more uncertain we are."

ISON looks to have survived its encounter..? This is the oddest comet I've ever heard of.

Per the @SungrazerComets twitter account, it seems that a small chunk of the nucleus of C/2012 S1 did survive the perihelion pass intact. No estimate yet on any possible size ranges, but hopefully they'll be able to get those soon.

And I just want to end on this note: not long after comet ISON was discovered, it began to raise questions. Throughout this year, as many of you who have followed closely will appreciate, it has continued to confuse and surprise us. For the past few weeks, it has been particularly enigmatic and dynamic, in addition to being visually spectacular. This morning we thought it was dying, and hope was lost as it faded from sight. But like an icy phoenix, it has risen from the solar corona and - for a time at least - shines once more. This has unquestionably been the most extraordinary comet that Matthew and I, and likely many other astronomers, have ever witnessed. The universe is an amazing place and it has just amazed us again. This story isn't over yet, so don't stray too far from your computer for the next couple of days!
Click to expand...

Unfortunately, it's probably not going to be very bright. +2 magnitude at most.

I feel like there should be A LOT more panels until he comes back because it takes quite a long time.
On the other hand we don't know how comets feel time...