unfortunately, even the shaders can't do that

Started playing Minecraft again, interesting that it already looks better than on my old PC with Intel 4000 graphics... I still did not configure it to use the GTX 670M*.

Would need a while to learn playing it again... but I instantly found a large cave below me. Which difficulty level do you use on the server?


*But the GTX670M has great effect on Orbiter... Project Apollo with 60 fps on the DirectX9 client!
H

Urwumpe said:
Would need a while to learn playing it again... but I instantly found a large cave below me. Which difficulty level do you use on the server?
Click to expand...

I think it's on easy.

Hielor said:
I think it's on easy.
Click to expand...

Eccentrus said:
unfortunately, even the shaders can't do that
Click to expand...

I've found that placing and removing torches, or setting temporary fires removes lighting glitches on newly generated worlds - has this been tried on the server?

Izack said:
I've found that placing and removing torches, or setting temporary fires removes lighting glitches on newly generated worlds - has this been tried on the server?
Click to expand...

You need to cause a block update to update the lighting. There's no need to set it on fire or place torches, but you can place any block there to do that. Sometimes just standing for 5 seconds next to it updates the lighting too.

orb said:
You need to cause a block update to update the lighting. There's no need to set it on fire or place torches, but you can place any block there to do that. Sometimes just standing for 5 seconds updates the lighting too.
Click to expand...

In survival mode, placing and removing a torch is much faster than a block. Also, I find that just standing in a chunk and waiting for the chunk updates to stop does not remove all errors. I assume that if it did, SkyCity's problem would be solved by now.

In preparation for the servers eventual upgrade to 1.5, I have been refining the art of chicken farming. 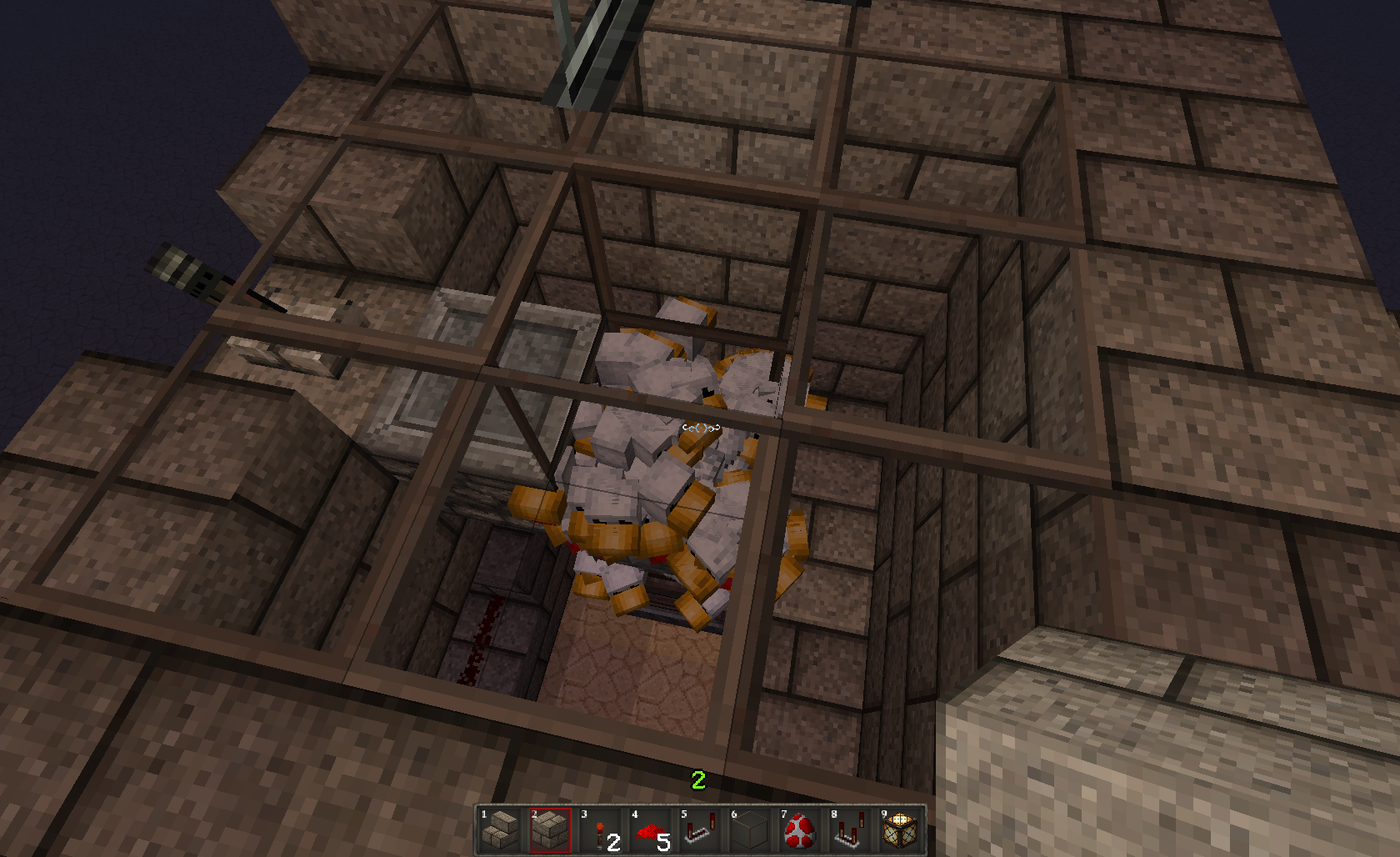 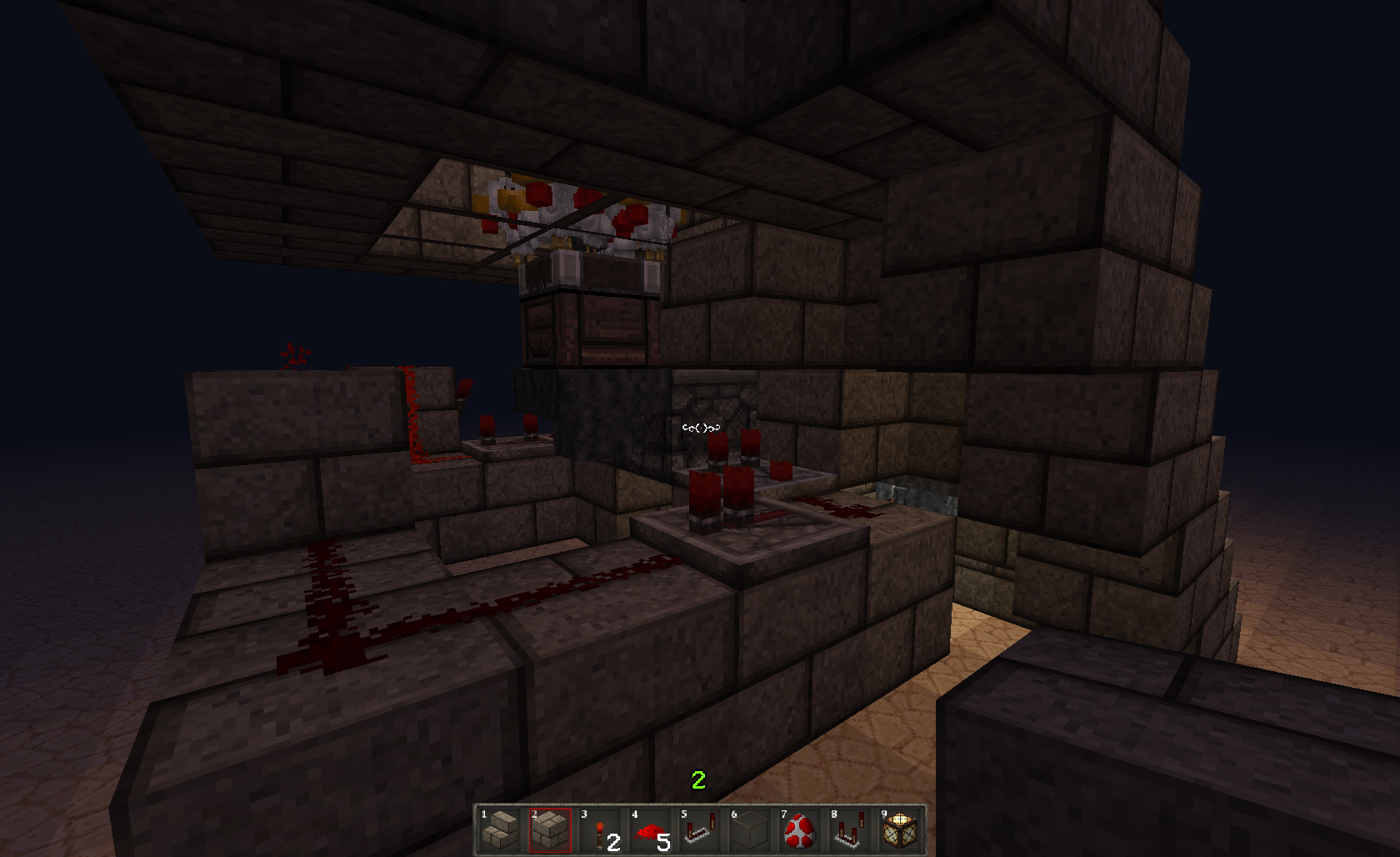 Which are picked up by the hopper beneath them and transported to a dispenser... 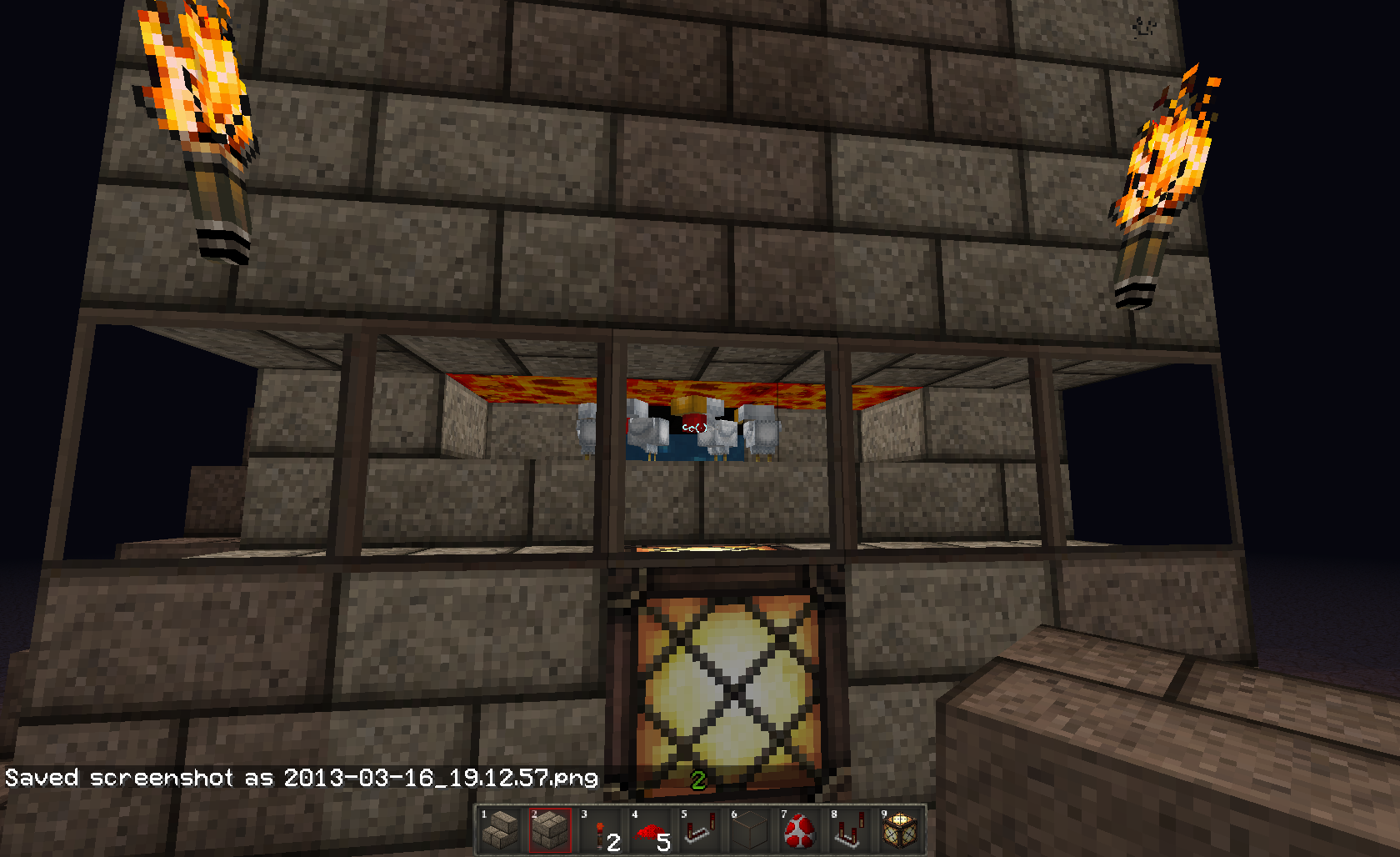 Which shoots the eggs into this compartment. The chicks are standing on half-slabs under lava. As chicks are only 1/2 a block tall they don't burn, but when they grow up they do, and the resulting feathers and cooked meat are picked up by more hoppers under the 1/2 slabs, and are deposited in a chest. The design is based on one I saw on JL2579's channel, which I refined a little.
This is what it looks like once all the redstone has been covered up etc: 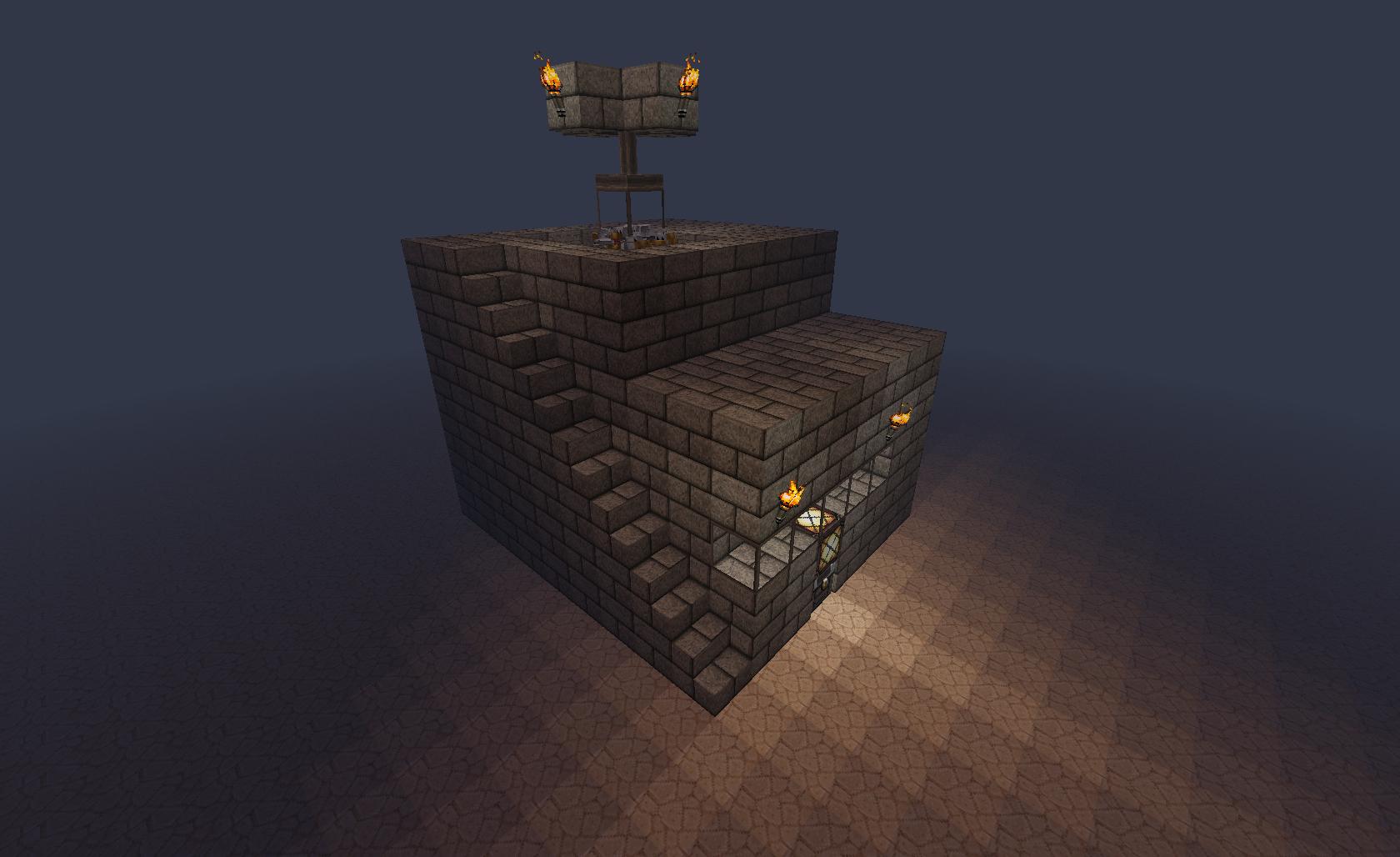 The farm unfortunately does need some restocking at times, as chickens seem to be able to glitch themselves under the hopper, where they get stuck.
Once the update drops I intend to build this on the server, just with many less chickens of course. :lol:

ADDENDUM: Unfortunately there also seems to be some loss of meat due to it just burning up in the lava. I'm not sure if there's much I can do about that.

ADDENDUM 2: It would seem that putting 200 chickens in a 1mx1mx1m space was not a good idea. I went to another part of the map and when I came back roughly 30 to 40 chickens had magicked their way out of the box.
Last edited: Mar 16, 2013

Here's my first Minecraft boat (under construction) I've been building lately on the Hielor's server
Click to expand...

I present to you, the HMS Slowboat.(The build in image thingy wanst working for me, so there is a link to an Imgur album)
~H

A functional, if not attractive-looking keep, centrepiece of the Eastguard on the borders of one of the continents in an SP world of mine.

Delay forever, or not at all.

Thanks for posting these pics, I'm very happy with how my farm looks. I was worried it would turn into some big ugly mess.


Eccentrus said:
Snowfall in the East

There's a new themed NPC village on Hielor's server, opened just yesterday. It still needs better connection with other places in the area (e.g. a railway to my lighthouse), but the village alone is fully functional.

A couple of screenshots I've made with the "Default" texture pack (featuring the first iron golem spawned by villagers):

And a couple with my standard (Misa's) texture pack:

(Villagers were taken from a nearby zombie spawner.)
H

The theme of that village is...doors? :lol:

The fireworks were pretty great. The many clans of local ocelots loved them, but my lone horse was a little jumpy. I think all the villagers even survived this year!

A couple of screenshots of a pirate ship construction taking place there, on Hielor's server:

Which Shader pack did you use? and where can I find an updated GLSL shaders mod?

Not GLSL shaders mod, but just Water Shader mod, although it's my custom version of it with slightly tweaked code.

A scene from a Minecraft game rendered with 3ds Max.

Its a small outpost in the middle of a desert called Danland. It is a modified desert palace. I settled in it after my original smaller base had been destroyed by creepers.

Privacy is at a premium these days, so here's a wall.

The wall is getting fairly large. I'm hoping to wall off about 70,000 square metres.