1252: Japan's Fuji TV has run a screen caption saying that as many as 10,000 people are missing in the town of Minamisanriku in Miyagi prefecture.

I just checked the town on Wiklipedia and they report a population of 19,000 in that town.
[ame="http://en.wikipedia.org/wiki/Minamisanriku"]Minamisanriku, Miyagi - Wikipedia, the free encyclopedia[/ame]

BBC report a tweet
1316: Noriyuki Shikata, deputy cabinet secretary for public relations for the Japanese prime minister tweets: "Blast was caused by accumulated hydrogen combined with oxygen in the space between container and outer structure. No damage to container."


Belisarius said:
BBC report a tweet
1316: Noriyuki Shikata, deputy cabinet secretary for public relations for the Japanese prime minister tweets: "Blast was caused by accumulated hydrogen combined with oxygen in the space between container and outer structure. No damage to container."
Click to expand...

These amounts of hydrogen only are produced when the zirconium cladding of the fuel elements reacts with the water at more than 1750K. This is the fourth stage of a meltdown and means the temperature will raise much faster already than by decay and residual reactions alone.

So that looks like they are venting the container, could they pump water into it?

Belisarius said:
So that looks like they are venting the container, could they pump water into it?
Click to expand...

That is old news, from before the explosion. See the TEPCO press releases that I posted earlier.

If they didn't vent the steam from there, the hydrogen would have remained in the pressure vessel and only displaced steam.

There are reports that there was another earthquake..

Somebody commented on the heartless nature of the comments on CNN and other media. Here's a handful of the latest on CNN on the report that the US is sending teams to help


1BHart How can the US do this? The US is broke and has it's own serious problems to deal with. Is the US taxpayer expected to absorb this?
4 minutes ago | Like | Report abuse

packerlandpi Shouldn't we save our money seeing how we are in such a large deficit? Japan has enough money, let them use it.
5 minutes ago | Like | Report abuse

durrrr We are from the government and are here to help.
7 minutes ago | Like | Report abuse

JLWKCMO Americans lose homes and starve and our governments are closing our schools, yet we always have money for other countries. A day of rage will come to america soon. We live in an autocracy for the wealthy. All the rulers are rich while the american people suffer. Our revolt will come.
14 minutes ago | Like (2) | Report abuse​

Another fake for the collection:


Its just an Aegir.

NHK World now also used a Mark II containment structure as reference for explaining the emergency cooling systems of the reactor, so it looks like the first guess here was right.

Urwumpe said:
NHK World now also used a Mark II containment structure as reference for explaining the emergency cooling systems of the reactor, so it looks like the first guess here was right.
Click to expand...

Care to make a prediction based on the known evidence so far? Or is it all just unknowable at this time?

On the original event - 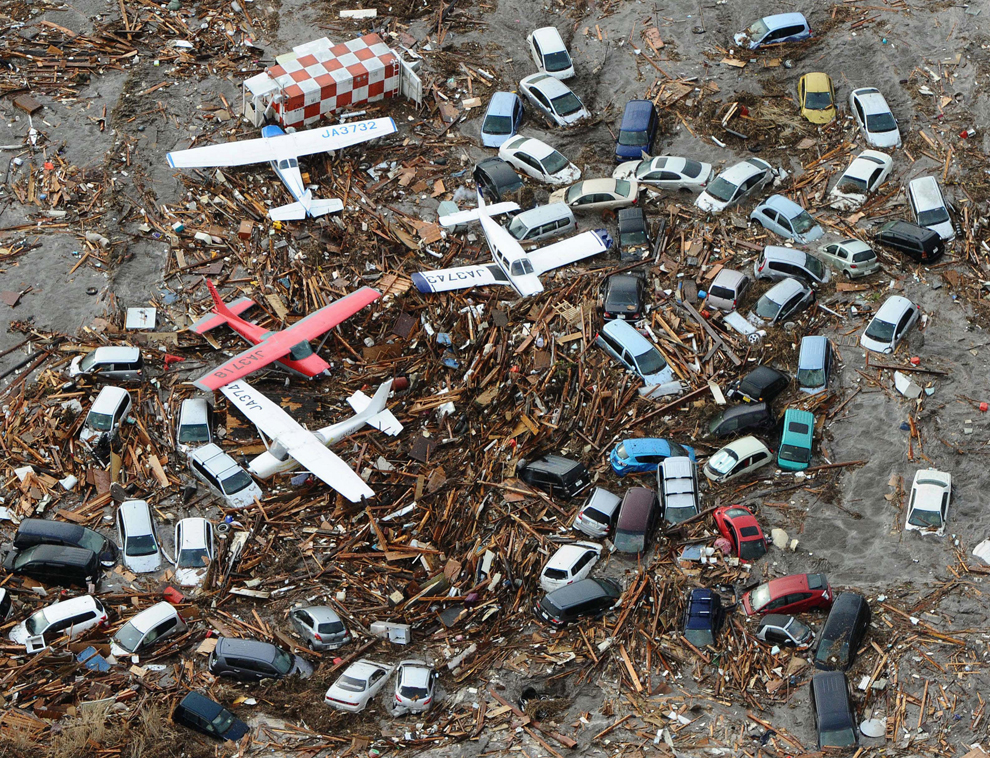 I thought these were toys on the first glance...

The waves and nature do play with them like that's toys:

You have to give credit to the Japanese though, general training and preparation for such an event probably saved millions of lives yesterday.

Jarvitä said:
You have to give credit to the Japanese though, general training and preparation for such an event probably saved millions of lives yesterday.
Click to expand...

True. If this happened in any other country, the death toll would be far higher.

MeDiCS said:
True. If this happened in any other country, the death toll would be far higher.
Click to expand...

Indeed, were it happened in Jakarta, I'm sure that 99% of the building will collapse and about 70% of the population will perish.

Location
in the cold Denmark

@Urwumpe; I'm not sure that video from SF is fake actually. The guy filming this video says it shows the water during LOW-tide. And that it came and went multiple times during the time where it was supposed to stay out:

Belisarius said:
Care to make a prediction based on the known evidence so far? Or is it all just unknowable at this time?
Click to expand...

Well, lets see what evidence we have, maybe you then see my problem with making any proper predictions. I couldn't do it much better than my tea leaves oracle before launches.

So, by these facts so far, my estimate of the current situation is, that the meltdown is already at least in the fourth phase. I can't tell that primary circuit integrity is compromised as long as there are alternative sources for iodine in the current situation. If the cooling pumps had already been insufficient to keep temperatures below 1500K until now, they will also be too weak for preventing the fifth stage of meltdown, and a debris bed of molten material will form.

Cooling the reactor by seawater is the best option, but I have doubts that without working cooling pumps and after the explosion damaged the building, that this operation will reduce temperatures below 1500K quickly enough. As long as the meltdown is just in the fourth or fifth stage, the cooling by seawater could prevent further damage and bring the reactor back under control, but the reactor is still a total loss.


If the sixth phase is not prevented by quickly cooling the melting fuel, the resulting steam explosions inside the pressure vessel could alone mean a bad day. if there are just small amounts of steam getting produced at a time, this could be vented in a controlled way, by releasing again more nuclear material.

There are two possible outcomes of the sixth phase: The cooling efforts succeed and the corium solidifies again inside the lower plenum of the reactor, meaning the reactor is a total economic loss, but the radioactivity release remains limited. Or it comes to a recritically event, because not enough control rod substance or radiation poison is in the lower plenum suppresses the nuclear reaction, resulting in a rapid increase in pressure and temperature, that would destroy the pressure vessel, vaporize large amounts of water regardless of the source (coolant or seawater) and spread radioactive debris over a large region, possibly over many countries.

The large amount of radiation on a nuclear plant worker suggests that this re-criticality could already be happening or the primary circuit integrity is already compromised and the radiation inside the reactor building but outside the containment structure is much higher as usual.

But that is not the only danger. The cold sea water on boiling hot reactor containment could also increase new pressure explosions and cause structural damage by thermal stress.

I expect at least a further local contamination as best case. The reactor will be a total loss. Worst case would be a massive steam explosion caused by a total meltdown.


This is not TMI again. TMI was a meltdown that was stopped in phase six, but, the important difference is that in TMI, the coolant pumps had never been completely lost, but deactivated because of cavitation, and coolant circulation was available after the next shift noticed that natural circulation was failing because of steam pockets in the coolant channels. Once the pumps had been activated again and coolant levels topped again, the temperatures dropped quickly and the situation was slowly getting back under control (about 3 days later the reactor was already in a known state).

In this case, the reactor has to be cooled from outside, until the electrical power to the pumps can be resumed. If the explosion damage prevents this, only external cooling is available, but a last resort action. If there is re-criticality in the core, this sea water cooling is even worse, it would be just an ave maria action, your last chance in a deadly situation to prevent much worse. The water could help keeping the amount of nuclear material leaving the core low, but the total meltdown would happen anyway and a lot of evil stuff would go into the upper atmosphere.

Any complaints about my assessment? I could also just rely on tea leaves.

Urwumpe said:
Any complaints about my assessment? I could also just rely on tea leaves.
Click to expand...

I complain about it's conclusion, not accuracy.

MeDiCS said:
I complain about it's conclusion, not accuracy.
Click to expand...

Any chance you could tell what exactly you see different as conclusion?

Thanks for that very detailed and clear explanation of the situation so far, and the best/worst case estimates. It's a lot more reliable than the confused reports coming through the media, seems to me.

The most ominous thing right now is the absolute silence on the situation there from news reports. It's the middle of the night there, and of course very hard to get details in an emergency zone with no reporters, but the Japanese govt and the IAEA are saying nothing either.

EDIT: PS - What are the prospects for spraying seawater with high-pressure hoses and using helicopters to dump water on the container? Would cooling the container exterior help at all or is that a dangerous waste of effort?
Last edited: Mar 12, 2011

Urwumpe said:
Any chance you could tell what exactly you see different as conclusion?
Click to expand...

Sorry, I expressed myself badly. I meant that I can't complain about the accuracy, but I don't like conclusions you reach. Even the best case scenario just add more losses to the Japanese people.

Well, I also hate playing Cassandra today, but the situation is bad, and I am personally no fan of making unfounded hope. This hope can start when the temperature is really dropping, the reactor back under its own circulation system and work can shift from keeping the patients alive to finding out what is actually causing the problems.

But currently, I don't see this hopeful future coming soon.

The latest updates: Radiation levels of 1 mSv/h had been detected outside the plant (normal background radiation is 3.6 mSv/a). 3 citizens out of 90, that lived nearby had symptoms of radiation poisoning, but no news yet, how strong the poisoning is.

I am not sure how to estimate this well, if this is a systematic radiation level and not just limited to a single detector close to the plant or only existing for a few minutes, I would expect it to be more than just a bit of radiation that escaped while venting steam. If it is a singularity, it could be explained alone by radiation that was produced already by the beginning meltdown.

But it sure undermines the claims of the Japanese government, that the radiation levels are dropping and all is safe now. The trend is not visible.

Digital Globe has published color images of the damage during the Earthquake, including the nuclear power plant.