Here excess mortality is also being looked at. It started to rise in December/January, before the official arrival of the virus.
Covid deaths only seem to account for half of the excess.

I'm happy to start seeing some proper studies being done in Europe (and other open societies).
I don't trust the original Chinese findings that much because they are politically and economically oriented. Let's not forget what happened to the doctor that discovered the virus...

4throck said:
Here excess mortality is also being looked at. It started to rise in December/January, before the official arrival of the virus.
Covid deaths only seem to account for half of the excess.
Click to expand...


Just look at the first plot on this page for comparison to the past two years, including the rather bad influenza season of 2018. Usually, the influenza season is always over in calendar week 16 and only little excess mortality is observed compared to the 25-year baseline.

In 2020, mortality is up and rising in CW 16, after the really week influenza season already ended to be prominent in CW 8.

In other plots, you can see, how the total excess mortality of the year is mostly coming from the first three months - this year the numbers started climbing rapidly in April.

The data of that page is far from perfect, because of weird federalism, only one state and Berlin take part in the statistic. Things would look far worse for the German plots, if lower saxony and NRW would be counted as well for excess mortality, alone Wolfsburg is an extreme case there. Only relatively few cases in the 100,000 citizen city, but a high number of deaths because of a single institution having a local outbreak.

In preparation of a restart of production, Volkswagen is planning to project messages and animations on the southern facade of their iconic power plant from today evening on.

The power plant sits right opposite of the main train station of Wolfsburg on the other side of the canal, you can easily see it from the main east-west street of Wolfsburg or from the highest point of Wolfsburg, the world war memorial on top of the Klieversberg.
Last edited: Apr 24, 2020

Meanwhile my brother's wife had been in the hospital with COVID since last Friday. Spent the weekend in the ICU, but has been getting better since then.
Said she feel like a lab cat, with all the various treatment options being tested on her.

Apparently the newest experimental treatment being tested is helium inhalations.
Yes, *helium*.
No idea what the mechanism is, but it seems to be helping against the cough.

Apparently the newest experimental treatment being tested is helium inhalations.
Yes, *helium*.
No idea what the mechanism is, but it seems to be helping against the cough.
Click to expand...

It gives you a funny voice, but that's because the speed of sound is different in Helium than in air, not because it affects larynx musculature or anything. How that's helping with a cough... Yeah, I got nothing.

Hm, they might be on to something. Here is an article from 2014 on heliox use in respiratory care: https://www.ncbi.nlm.nih.gov/pmc/articles/PMC4093964/

"Lower density of heliox compared with the air or oxygen regardless of the concentration of helium in the mixture; improves air flow through constricted ways by transforming turbulent flow into laminar flow. Benefits are seen quickly, usually within an hour of initiation of treatment."

Haven't they been using this mixture for deep divers, or is that something else?
F

Artlav said:
Apparently the newest experimental treatment being tested is helium inhalations.
No idea what the mechanism is, but it seems to be helping against the cough.
Click to expand...

I found that ( wich confirm your source ):


"This mixture ( heluim/oxygen ) has been demonstrated to be effective in treating patients with upper airways obstructions. The airway obstruction enhances the rough turbulent flow already present in the larger airways. The low density mixture favors a smoother, more laminar flow through the airways.../... It has been suggested that breathing helium/oxygen mixtures may affect the cough mechanism, because an effective cough requires turbulent flow..."

Czech Republic announces it will reopen borders closed since 16 March
Click to expand...

Meanwhile, at my state capital: 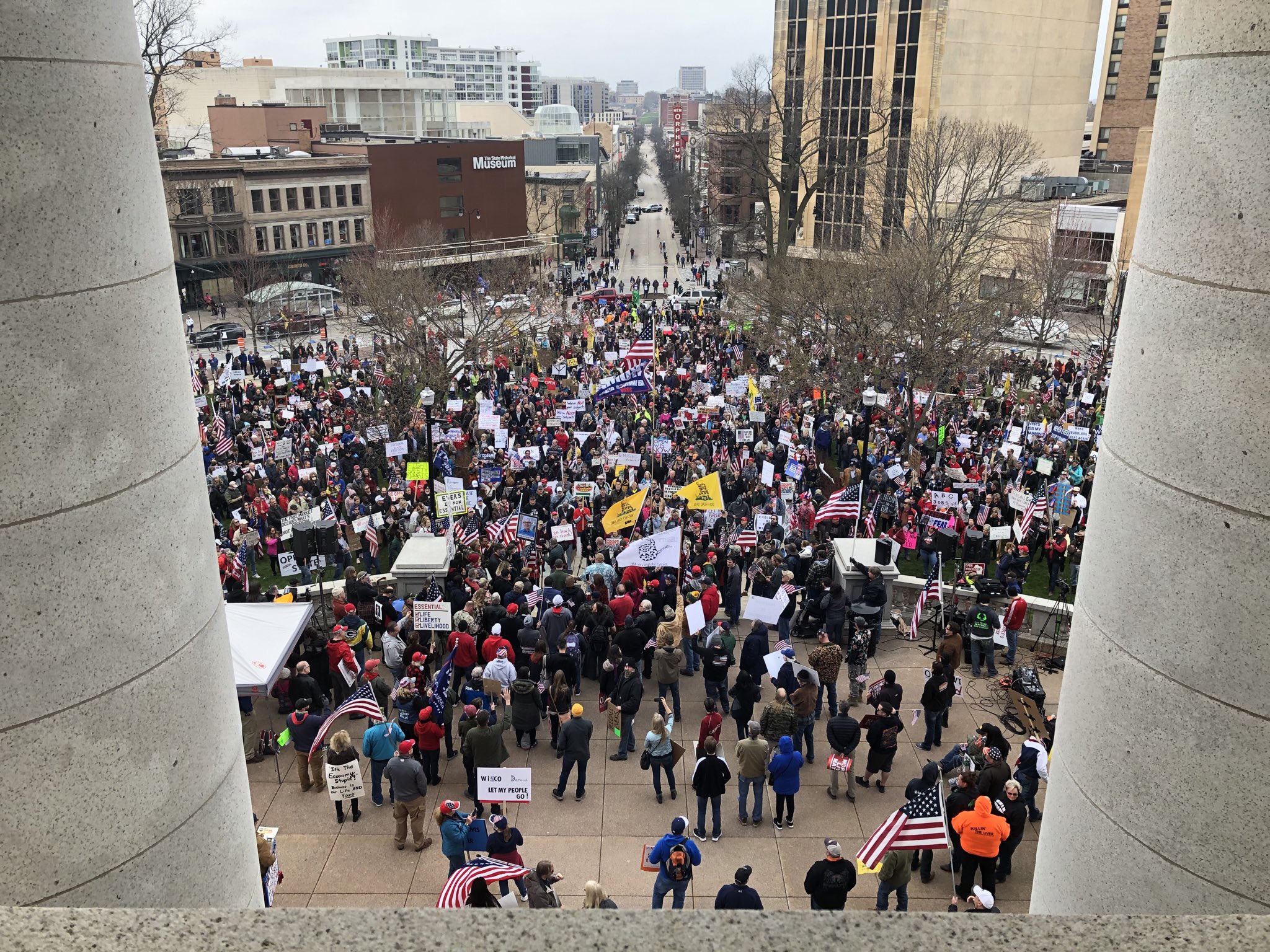 Most Muslims will observe the holy month of Ramadan by fasting under lockdown but clerics in some countries push back
Click to expand...

Here in Morocco it will be strictly forbidden to walk outside between 19h and 5am. I even got a mail from the french ambassy as a reminder. Police in Casablanca is not too reluctant to use their batons... Also the streets are not as empty as they were the first days. Weather is almost always sunny, and the temperatures are rising during the day. Cats are the real kings of the streets, and are having a good time sleeping right on the walkways while the humans are locked home (here the cat is a sacred animal).

There's probably a sort algorithm joke in there somewhere, but its beyond me.

theguardian.com: Coronavirus: what have scientists learned about Covid-19 so far?

{...}
Are we protected for life if we get infected?

Doctors examining patients recovering from a Covid-19 infection are finding fairly high levels of neutralising antibodies in their blood. These antibodies are made by the immune system, and they coat an invading virus at specific points, blocking its ability to break into cells.

“It is clear that immune responses are being mounted against Covid-19 in infected people,” says the virologist Mike Skinner of Imperial College London. “And the antibodies created by that response will provide protection against future infections – but we should note that it is unlikely this protection will be for life.”

Instead, most virologists believe that immunity against Covid-19 will last only a year or two. “That is in line with other coronaviruses that infect humans,” says Skinner. “That means that even if most people do eventually become exposed to the virus, it is still likely to become endemic – which means we would see seasonal peaks of infection of this disease. We will have reached a steady state with regard to Covid-19.”

The virus will be with us for some time, in short. But could it change its virulence? Some researchers have suggested that it could become less deadly. Others have argued that it could mutate to become more lethal. Skinner is doubtful. “We have got to consider this pandemic from the virus’s position,” he says. “It is spreading round the world very nicely. It is doing OK. Change brings it no benefit.”

In the end, it will be the development and rollout of an effective vaccine that will free us from the threat of Covid-19, Skinner says.
{...}
Click to expand...


He may make a point about some aspects of finances, there is no easy situation. Some can't take being indoors anymore, their businesses closing up.

Unemployment is heading to nearly thirty million in the states. Mad.

nytimes.com : 1 in 5 New Yorkers May Have Had Covid-19, Antibody Tests Suggest

Important to remember there: Those antibody tests have a high false-positive rate and discovering antibodies is no indication, that people are immune to the virus.

Important to remember there: Those antibody tests have a high false-positive rate and discovering antibodies is no indication, that people are immune to the virus.
Click to expand...

Yeah, Swiss government already announced that anitbody tests were unreliable to assess immnunity after about a week of testing anti-body tests. Must have been around the beginning of the month, I think.
Initial plans were to put immune people back to work as quickly as possible, but they had to scrap that idea.

We're scheduled to start easing lockdown measures on Monday, though, and if that goes well, schools will be reopened on may 11. We've never been hit very hard to begin with, of course.

We just got an "official" email from school, explaining to us that the planned restart of the 4th grade next week was cancelled, despite already equipping them with masks.

B.B. (our nine year old) has been out of school now since March 6th (they did not return to school after spring break). School has been cancelled for the remainder of the year, but each teacher has been doing distance learning with their kiddos via Zoom. Several platforms (I-Ready and Reflex) enable the kids to study mat'l and test, and the teachers can track each students participation.
I'm wondering how much this will hurt the younger kids? She's doing some basic algebra in grade 3, next years concepts should jump up also? Will we have a whole class of kids hobbled, or do ya'll think they are resilient enough to bounce back?
School starting up this August is currently "in the air".
You must log in or register to reply here.
Share:
Facebook Twitter Reddit Pinterest Tumblr WhatsApp Email Share Link
Top