Even though it looks like there is space to the rear. There is not because of the waste Management and back packs

Yes I thought that might be the case. I would add the food prep area and maybe another hard seat storage to the right wall and that should have it. We'll need a look with the other 2 guys standing up during flight ops. One with a broken strip and 1 with no stripe

The food prep area is there it is blocked by the door. I will add a hard box to the right wall. 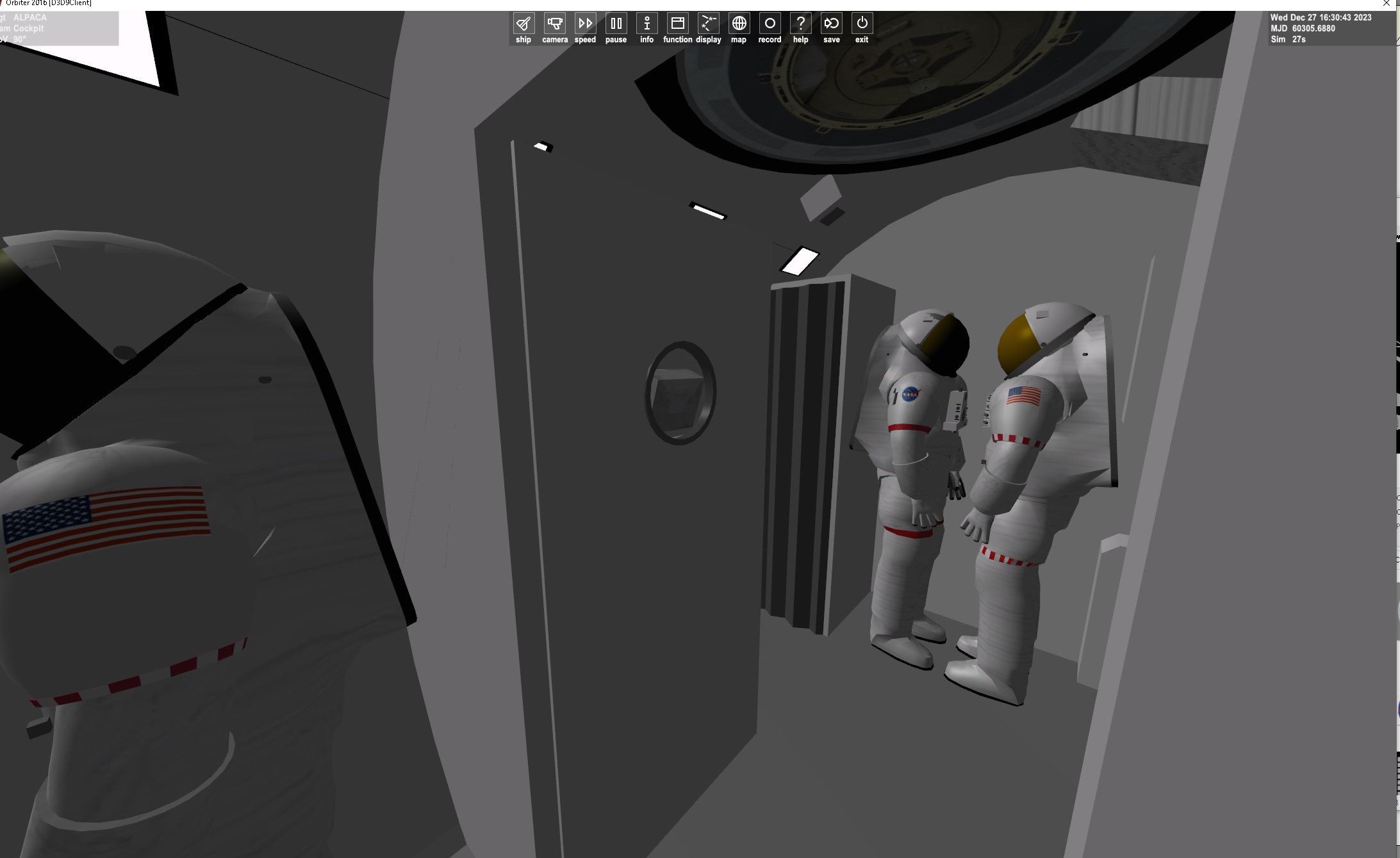 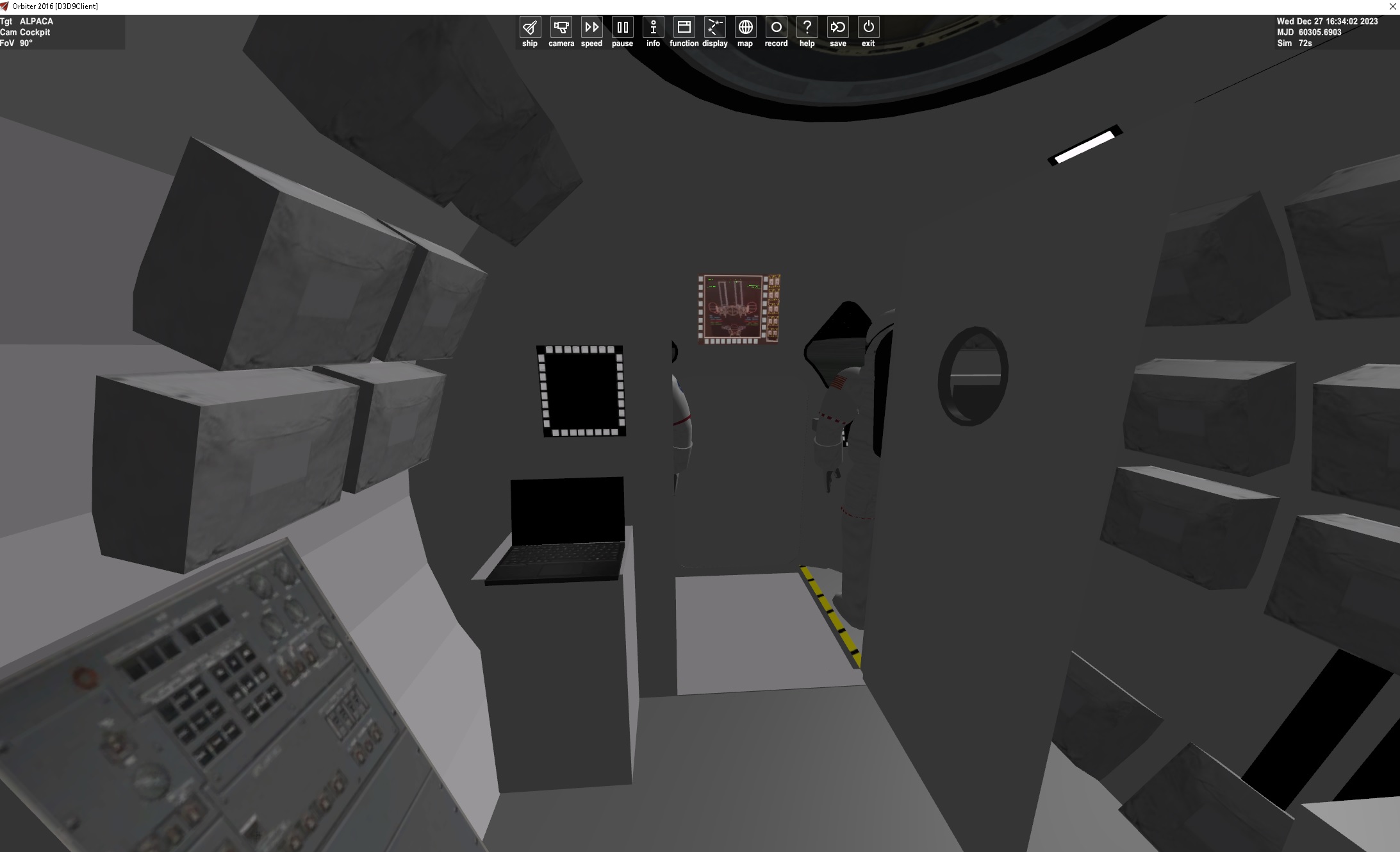 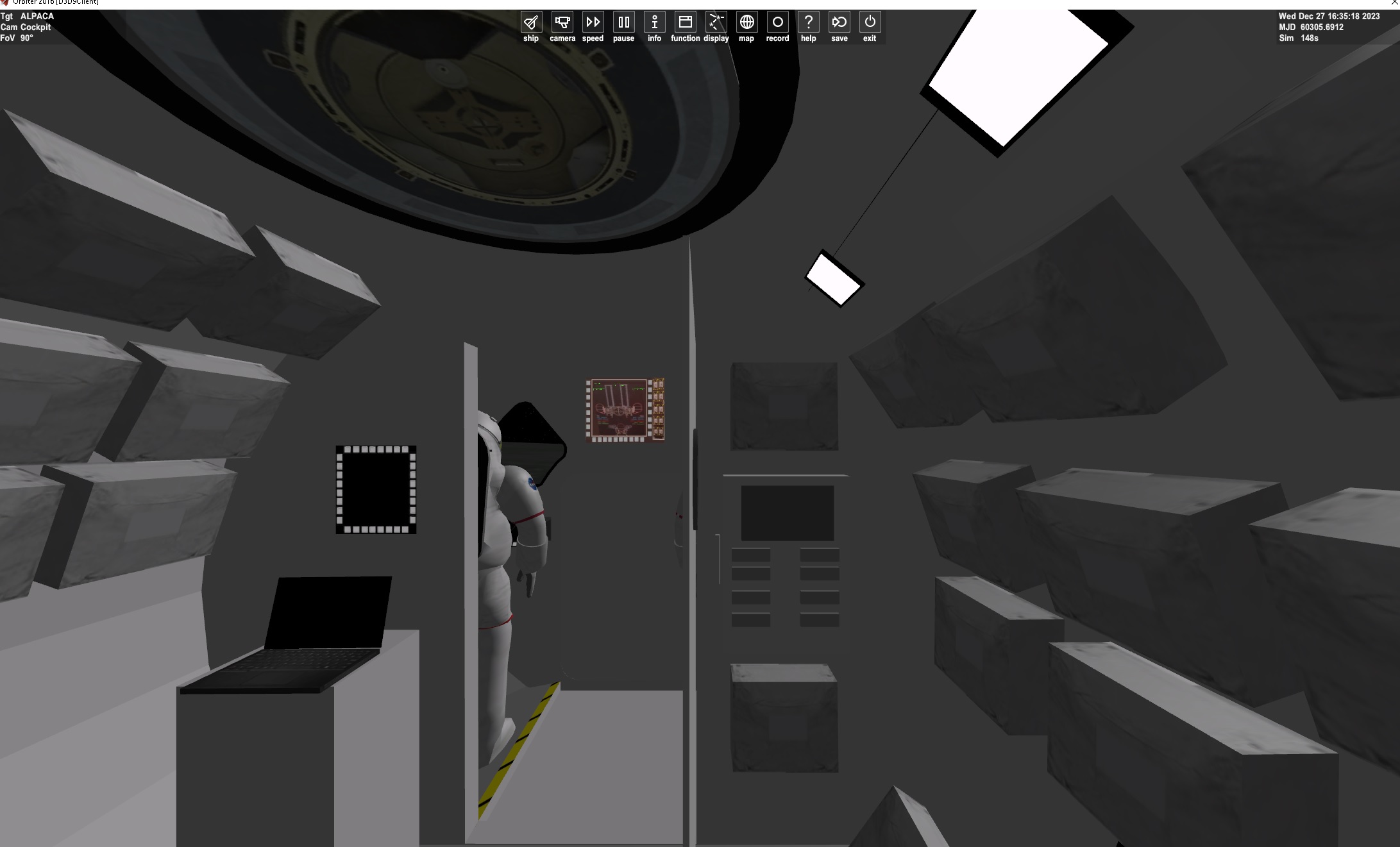 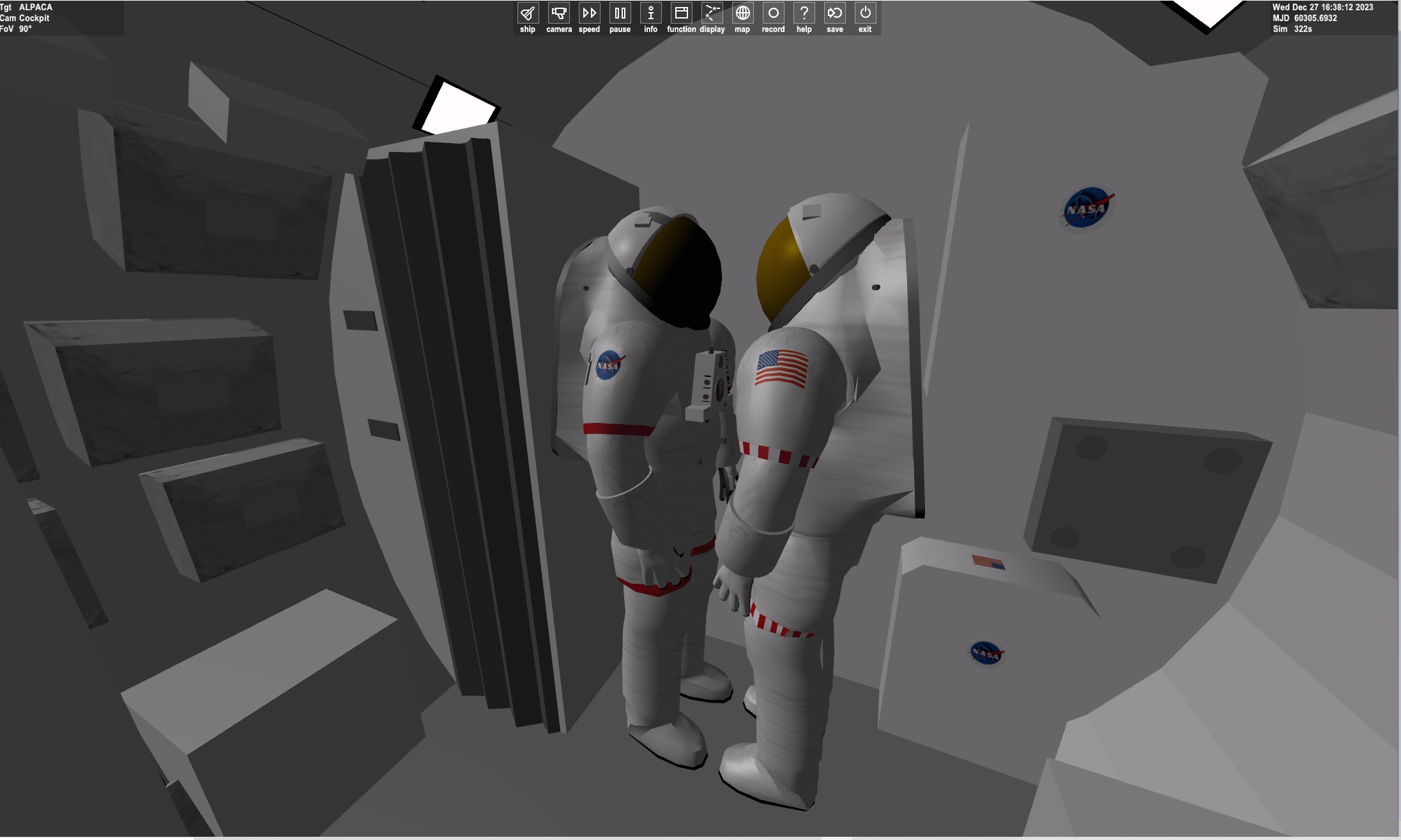 I just uploaded this version to the goggle drive. 5 opens closes the interior door. the scn is:ALPACA landed on Marius Hills_NewevaHGAINT
you will need this cfg: DyneticstestCREWint and this mesh:dyneticstest2HGA1, dyneticsvcrewstripered,dyneticsvcrewsolidred
goggle drive:

drive.google.com
If someone can set cameras. Not really worried about the crew animation as we had them moved into the back which is seen now. A dll version will need to be made to do that make the mesh not seen. I can do that but I want to base it off the final cfg

might need to add the other back pack on the back wall. and the new new suits in their landing positions they should be good

The back packs are there. I made a new mesh with different shades. See what you get?

Any one tried and had issues with the newest lander?

As far as eva animation. I can do this. Bend and rotate at the waist. Might could rotate the arm at the shoulder. And rotate and bend the hand. ignore the legs stripes and lack of textures

I might would go with just a little front lean as with you # 3 guy.
Keep in mind the broken red line for EVA 3 and no line for EVA 4

So just lean the upper body forward? Which Number 3 guy? 4 eva guys. All the same except. Solid red, no red, broken red. What for the fourth

Bent the upper body some
J

I have founded a 3D model of Blue Origin's lunar lander! In it's own animation, the Blue Origin HLS has three components that dock after launch.

Jeremyxxx said:
I have founded a 3D model of Blue Origin's lunar lander...
Click to expand...

That ladder... seems really high!
You only notice how high it as on the LM after you've seen a 1:1 scale model. From images it looks just like a few steps, but it wasn't.
Here it's much higher. Just imagine carrying samples and equipment up and down!
The ALPACA seems like a much better design...

The mock-up of the Blue Origin HLS is even taller than the Shuttle orbiter. Yeah, I agree that the ALPACA design by Dynetics is way better than this...plus it's almost entirely reusable 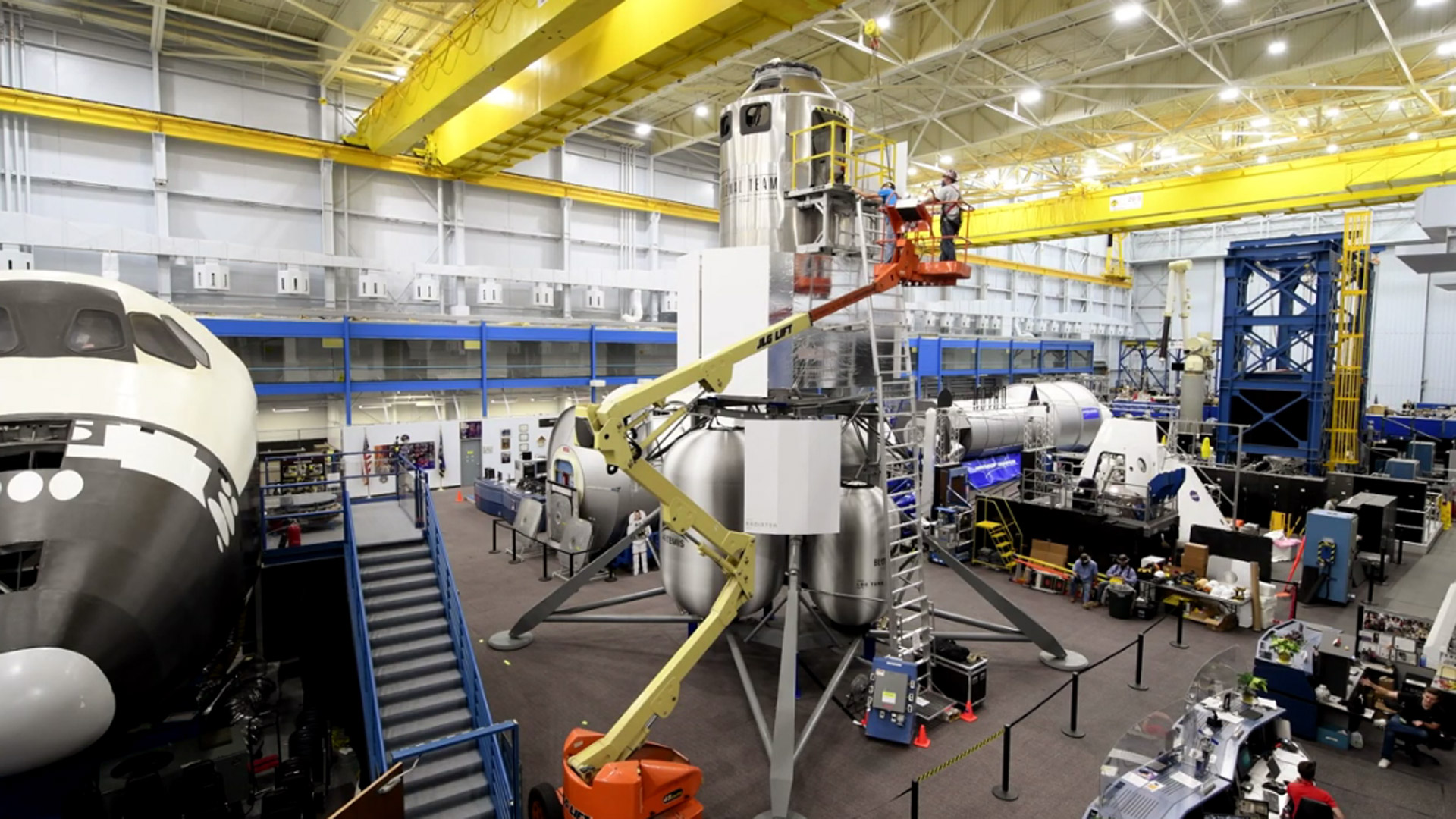 Wow. And then there is the Lockheed Martin Lander. Yes I think The ALCAPA is the way to go. I am sure each has their own benefits

Lockheed teamed-up with Blue Origin sometime after they showed their SSTO proposal. As a matter of fact, they will be responsible for the development of the ascent stage, while Blue Origin on the descent stage based on Blue Moon. The transfer element will be handled by Northrop Grumman (and will be based on the Cygnus cargo ship).

The architecture behind their proposal indeed is way complicated to operate (though I think it's still fun to fly on Orbiter)
Last edited: Nov 18, 2020

Oh. I guess someone could build the Blue Origin one. And try it. I personally like the Dynetics one. Oh Yes it looks similar to the LM version I was working on.
Last edited: Nov 18, 2020