Question Ranger (and other ships) from Interstellar?

As I see it and I might be wrong.

The desk rotates along the x axis to follow the rotation of the ship.

BUT shouldn't the camera view follow the orientation of the desk.

So right now even though the desk is upside down the camera view is right side up.
G

I don't claim to know much about this, but would it possible to reverse the whole system, make the rotating seat the vessel and rotate the hull around the vessel, as opposed to having the hull as the vessel and the seat be the rotating element? if it doesn't interfere with the operational areas of the hull, like landing gear, engine location, and / or docking points?

On the lander and pods.

Just to wet your appetite.

beautifull !!! can't wait really ! are each of the landers and rangers undockable ?

demi said:
beautifull !!! can't wait really ! are each of the landers and rangers undockable ?
Click to expand...

Yes. Each ranger and lander will be undockable. The cargo pods are separate vessels so they can be unloaded from the Endurance and carried down to the surface.

magic ! and is it heavy to play ? got the ship from stargate universe and it is a bit too much from my computer, i wonder if the endurance will be running well

the rest of the simulator is running well, but for that particular ship the fps is pretty low. And as the endurance seems pretty complex and highly detailed i wonder if its gonna be the same.

Well on my laptop I get 22 FPS. But of course different machines get different FPS

gattispilot said:
Well on my laptop I get 22 FPS. But of course different machines get different FPS
Click to expand...

What GPU do you have?

About performance, this is what I get:


The machine specs are:

In both machines, was used a windowed Orbiter with 1200x750x32 resolution.

This is a full screen screenshot from the Scenario: 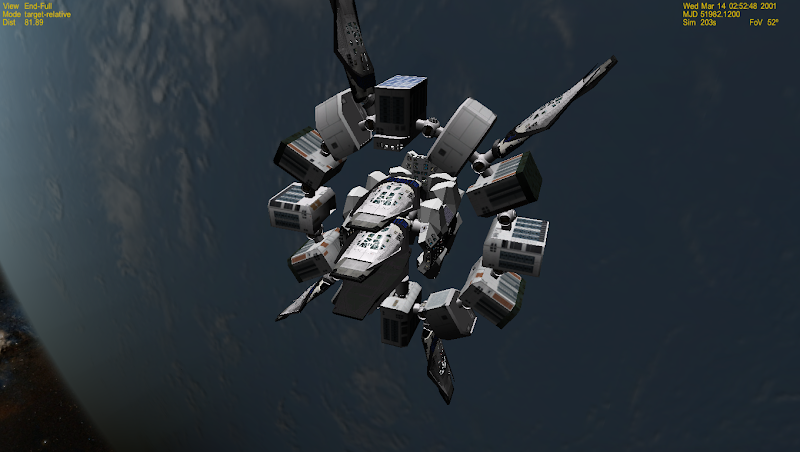 The old crap is... old. If I can run on this, I don't think we will have a performance issue on modern hardware.

The new crap =P is slower than the old due mainly the shared memory setup (that steals processor cycles from CPU and GPU) and also because WINE does a D3D to OpenGL translation in runtime, with negative impact on performance.
Last edited: Nov 11, 2015

Just to mention that, on my Old Crap, I doubled up the FPS in all Scenarios by fixing a (dumb) mistake I made while drawing custom textures.
Last edited: Nov 11, 2015
D

Guys when do you expect to release it online ? the endurance looks really great, just can't wait !

demi, check your message. We could use extra eyes and another tester
Last edited: Nov 26, 2015

FPS. Here is the Endurance with 3 interiors (command, cryo, habitat). 16 pods attached. But with a 2 rangers and 2 landers. We are getting low fps.

The endurance right now has 179 groups, 63371 vertices, 56285 triangles
I haven't combined all interiors yet so that drop the group #.

But with a 2 rangers and 2 landers. We are getting low fps.

The endurance right now has 179 groups, 63371 vertices, 56285 triangles
I haven't combined all interiors yet so that drop the group #.

i'm doing some homework on meshing, and got to this: it's better for D3D that you define your groups "ordered" by texture, and then by material.

This would minimize the texture and rendering context changes while drawing the world.

Well I have encountered an interesting issue.

Working on a VC for the endurance. Lisias came some code to rotate the camera.

So here in the Command Module the view is correct to a seated person. But they would be upside down looking from outside.

But even though the view looks correct for the person seated. The controls are backwards. 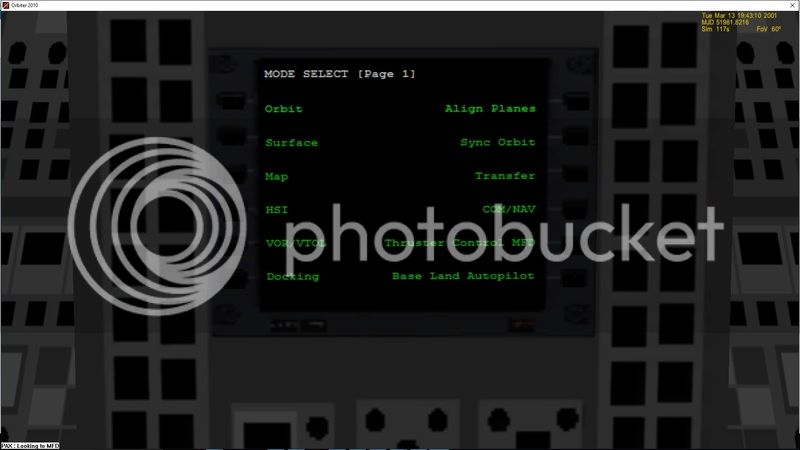 So when you click on the button of the left bottom you get the function on the right top.

On the VC I took the deltaglider mfd screen and mfd buttons mesh. I angled it to fit the dash and made it slightly higher. So it it is an overlay. But it looks different depending on the view. I can click the mfd ok from the center but if I get right on top I can click.