According to a recent government watchdog report, concern about that possibility held up production of the heat shield for NASA’s first space-bound Orion capsule, threatening to delay its uncrewed flight test next year.

NASA knew its chosen heat shield material could crack before atmospheric re-entry and has been studying whether any cracks could be serious enough to “threaten the safety of the crew and success of the mission,” the Government Accountability Office report said.

NASA says the mission known as Exploration Flight Test-1, or EFT-1, is on schedule for September 2014, and that cracking concerns have diminished since the GAO reviewed the issue last summer.

“Since then, through material testing, thermal coatings, computer analysis and operational control, we’ve significantly lowered the likelihood of surface cracking during EFT-1 and believe we will obtain the necessary test data,” said Rachel Kraft, a spokeswoman at NASA headquarters.

“The pods will provide the critical maneuvers necessary for Orion’s re-entry into the Earth’s atmosphere.”

The first set of pods arrived at Kennedy on Feb. 18, with subsequent pods arriving March 11, and April 5 and 19.

this kind of air-floating method for moving heavy instruments seems interesting, specially if noise level and its sensitivity on floor damages be acceptable. is it a common method in industry or a fully new way?

Does x-ray scan, do only for random parts of it or entire Heat Shield must be scanned?

Is that Heat Shield (that we seen in this video) on its final processes? and if not, what other processes will be done?

NASA's first-ever deep space craft, Orion, has been powered on for the first time, marking a major milestone in the final year of preparations for flight.

Orion's avionics system was installed on the crew module and powered up for a series of systems tests at NASA's Kennedy Space Center in Florida last week. Preliminary data indicate Orion's vehicle management computer, as well as its innovative power and data distribution system -- which use state-of-the-art networking capabilities -- performed as expected.

All of Orion's avionics systems will be put to the test during its first mission, Exploration Flight Test-1(EFT-1), targeted to launch in the fall of 2014.

NASASpaceflight: EFT-1 Orion comes to life via first power up

Something awesome about the news that Orion came online and everything was nominal.

Something awesome about the news that Orion came online and everything was nominal.
Click to expand...

Getting more real all the time. :thumbup:

I found this image on the Florida Today live webcam page for LC-39. Is this Orion being encapsulated?

Star Voyager said:
I found this image on the Florida Today live webcam page for LC-39. Is this Orion being encapsulated?
Click to expand...

Yes, I remember seeing that when we visited the VAB in August. I think its just a boilerplate though, no actual flight hardware?

The three massive panels protecting a test version of NASA's Orion multipurpose crew vehicle successfully fell away from the spacecraft Wednesday in a test of a system that will protect Orion during its first trip to space next year.

The panels, called fairings, encase Orion's service module and shield it from the heat, wind and acoustics it will experience during the spacecraft's climb into space. The service module, located directly below the crew capsule, will contain the in-space propulsion capability for orbital transfer, attitude control and high-altitude ascent aborts when Orion begins carrying humans in 2021. It also will generate and store power and provide thermal control, water and air for the astronauts. The service module will remain connected to the crew module until just before the capsule returns to Earth. During Exploration Flight Test-1 (EFT-1), the spacecraft's flight test next year, a test service module will be attached to the capsule.

"Hardware separation events like this are absolutely critical to the mission and some of the more complicated things we do," said Mark Geyer, Orion program manager at NASA's Johnson Space Center in Houston. "We want to know we've got the design exactly right and that it can be counted on in space before we ever launch."

Unlike conventional rocket fairings, these panels are designed to support half of the weight of Orion's crew module and launch abort system during launch and ascent, which improves performance, saves weight and maximizes the size and capability of the spacecraft. Each panel is 14 feet high and 13 feet wide. 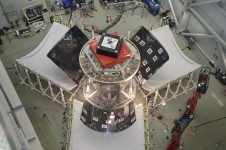 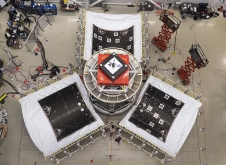 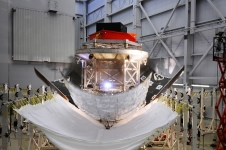