gattispilot said:
So with Brian's help we have launch: 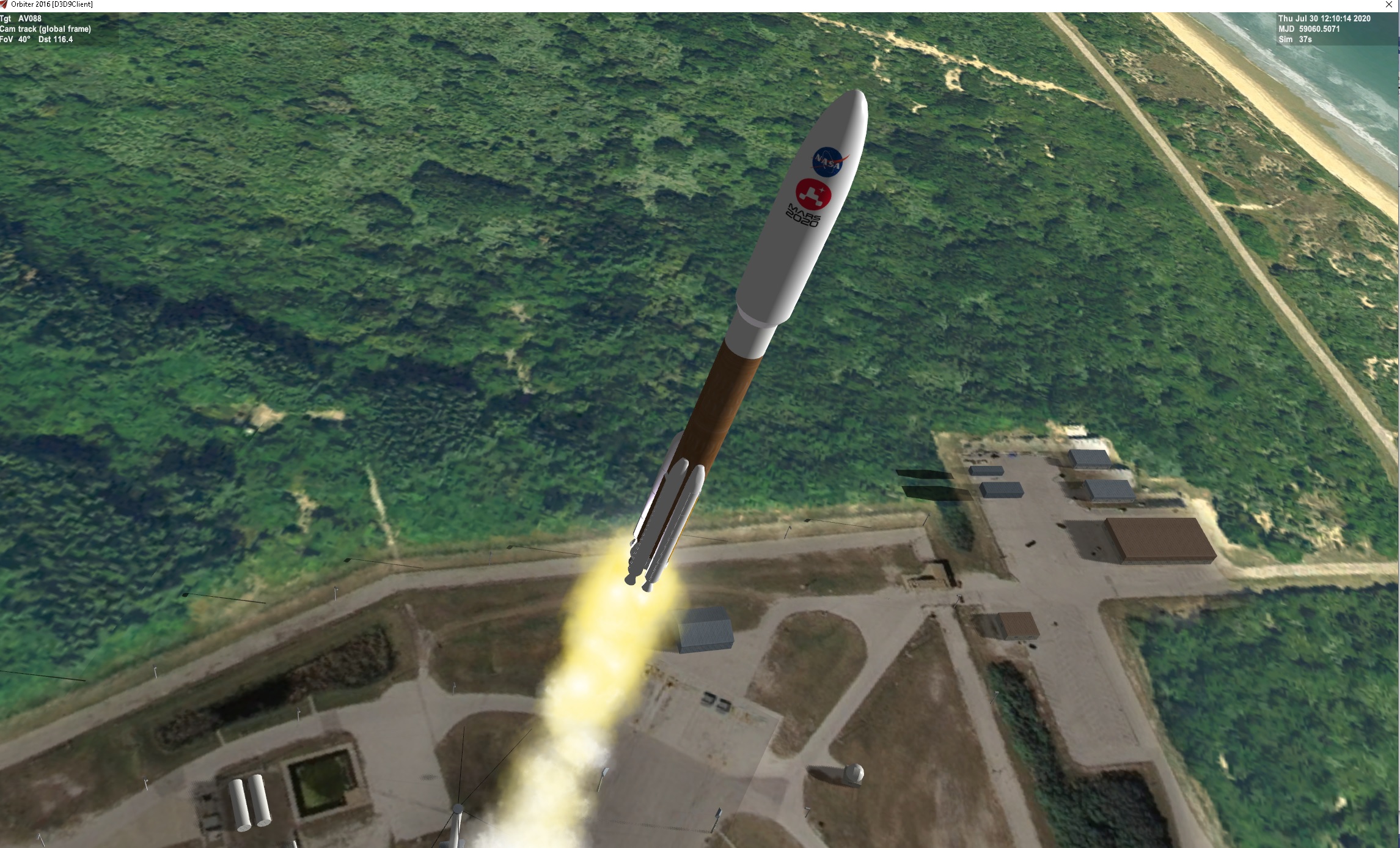 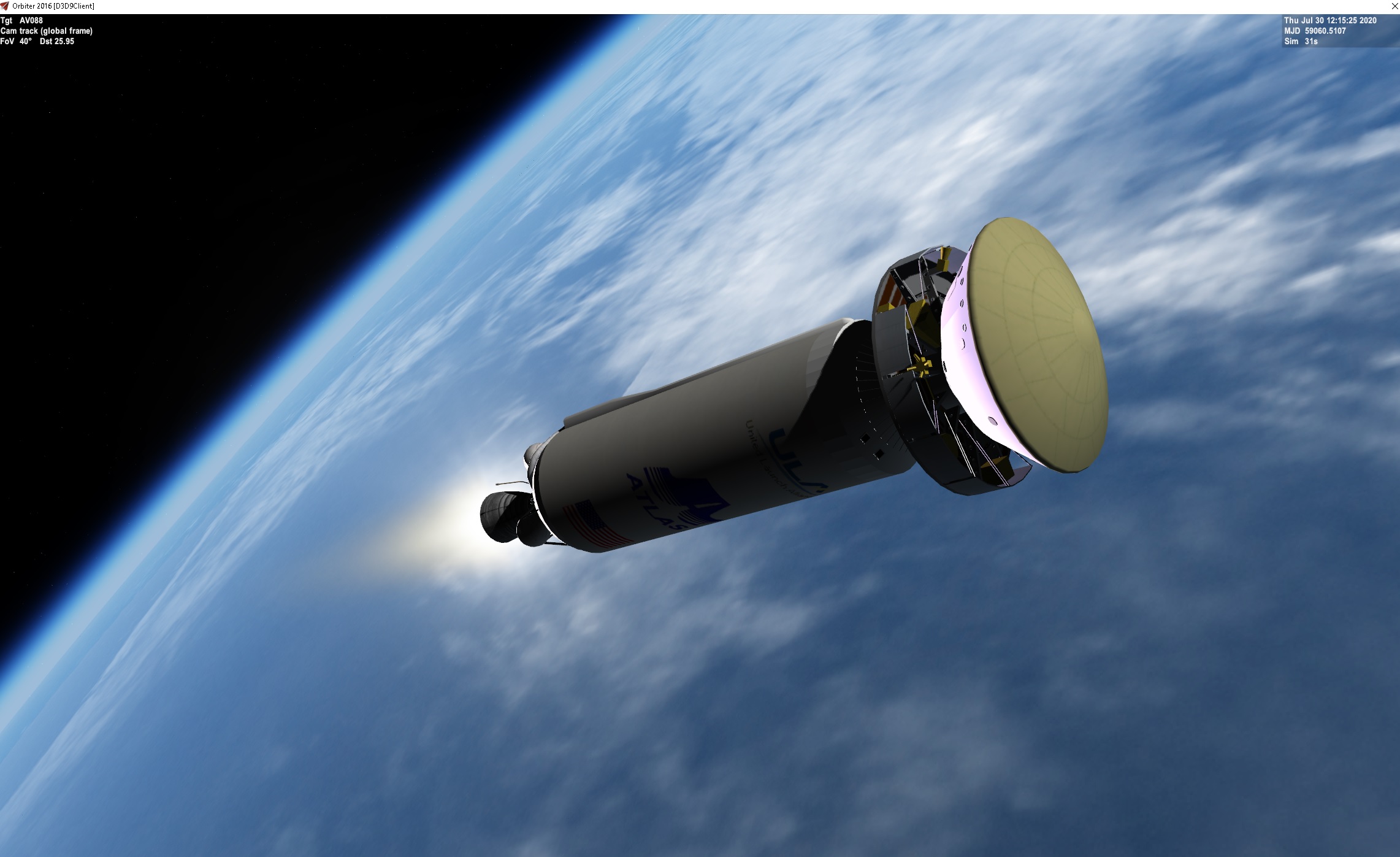 The trick is going to be getting the skycrane/rover to the surface
Click to expand...

Can this be applied to your Curiosity add-on as well?

Perseverance Rover have Successfully Launched and now en-route to mars

So I am stumped. I keeping getting ctd. I have trying running the debugger and all I get is stuff not loaded. It seems to be related on the load and save state.

Usually when an exception is thrown in Orbiter core, the call-stack might not be correct anymore, but in general this kind of exception means:
You have given a function a NULL-pointer ( reading location 0x00000000), wich is not handled there.
So the root-cause is any function-call with no good pointers provided.

The art of debugging this is: Find out what function call was bad!
If the call-stack is not valid, you can only break at "strategic" points in your modules code and step through until you get a feeling for when the exception usually happens.
If the CTD happens after a specific key-press for example, start at the keyboard handling methods.
If it happens right after startup, start at the c'tor.
...it's a process of small steps until you get the root-cause.

It starts at start up. But I have gutted it and slowly adding things back in. Working on a 2010 version and then a 2016. 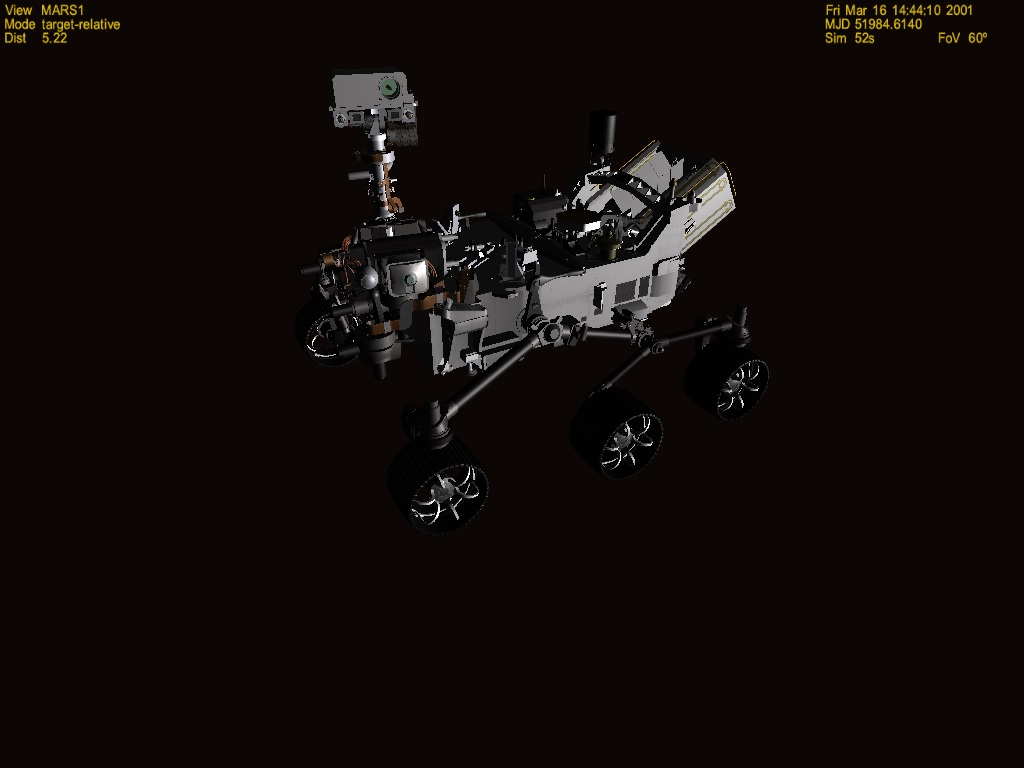 So now the issue is moving it.

so if I move it with the scn editor I get this:

So when I run this in 2016 I get a ctd on start. I start a debug attached to the process orbiter:
this is what I get in the call stack

The altitude is showing a NaN rsp. QNaN ("not a numbe"r rsp. "quiet NaN")

This is similarly why your debugger shows "1.#QNAN00", as it prints with 7 places and adds padding zeros to the end.

In some of your calculations you've created a NaN (either the memory only contained 0xFFFFFFF's) or by an invalid mathematical operation:

The NaN values are used to identify undefined or non-representable values for floating-point elements, such as the square root of negative numbers or the result of 0/0.

And for your call-stack: As I said, the point at which the exception is thrown is already too late and the call-stack is not accurate anymore. You are experience a stack-overflow!
You can only place breakpoints at strategic points and try to divide and conquer until you are left with only one singe statement that is wrong.

Thanks. So I don't think I placed any beak points. So I guess I should try to put on in. Any suggestions where to start?

So I set up break points

and ran it. odd it it didn't hit any breaks and loaded.

I exited and ran again and got this:

If you move the 3rd breakpoint two lines down (line 50) it will be on an actual statement (an assignment in this case - HGA_status = DOOR_UP;, which will be executed at runtime*)
And as this is the constructor of your MSL_ROVER class (thus creating an instance of that), you can step over each and every assignment, method call, etc. pp.

Some methods will be called from the Orbiter core as "callbacks", placing a breakpoint at the first statement in such a function will trigger the break as soon as some code (from Orbiter-core or Graphic-Client or OS-Keyboard handling...) calls this method.

Try to get a feeling for where you can place breakpoints. Then step some lines ([F10] step-over).
After that you might like to step into some of you methods ([F11] step-into).
If the method you like to step into is not from your code, something like your 2nd sceen might appear as that method has no debug-information available.
In that case you could step into it at Assemby-Level, but that's a whole new dimension and unless you know x86 assembly and the connection between C-Language calls to them, you should at first keep away from that route.

If you however find, that you would like to look into such a method, this is where you definitely should carefully read the API documentation of that method and make sure that you
a) understand what it expects and
b) provide it with the expected parameters!

So, place some breakpoints, see when which one gets triggered, remove (or disable) those that do not lead directly to a crash until you're left with an idea what leads to the issue.

As said, it's not a "one click and you're done" job.
Be patient persistent.

[*] at least in the Debug build, in a Release build this assignment might get optimized out.

Thanks. Move the break points. And solved it. It was the copter stored mesh.

So may need to make 2 versions. An d3d9 and normal graphics. The reason is the animations seem to be move at different speeds

gattispilot said:
Thanks. Move the break points. And solved it. It was the copter stored mesh.
Click to expand...


gattispilot said:
So may need to make 2 versions. An d3d9 and normal graphics. The reason is the animations seem to be move at different speeds
Click to expand...

Shouldn't be! I am no expert in animation definitions, but I bet that they are pretty similar for inline- and external- graphic-clients.
Especially when it comes to animation speed, there is no difference to be expected.
I would try to find where the difference might come from. I'll bet there is one more error in the code that is just "presented" differently in inline vs. external GC.

Why not share the code (github maybe)? Others might be able to help. There is no reason to hide code[*]!

[*] ...and don't get the feeling that your code is not good enough. It might not be perfect (which no code is), but you can only improve when you know what could be better.

Well for instance on my sf I move an attachment that moves the guy. It normal graphics he moves faster than in D3D9

gattispilot said:
It normal graphics he moves faster than in D3D9
Click to expand...

That's the observation. Now all we need is the reason.
I would definitely go the way of publishing the source code, as this multiplies the chances of people (see, plural ) finding flaws.:thumbup:

Just by reporting observations, it makes it orders of magnitude more difficult to assist / help compared to the open source approach.
Even posting a ZIP with the source-code will increase chances a lot!

Thanks. Here is what I have for the rover and code.
https://drive.google.com/file/d/1biwq0mTRVl4cqlx5OQd75BJIMp6SFS6h/view?usp=sharing

might take some time for me to set up a github

Thanks, you don't have any .sln and .vcxproj files for me? Your resource.h would also be nice.

Nevermind, figured out a way to get it compiling.
Last edited: Aug 9, 2020

is there a 2010 version for That Perseverance Rover & Ingenuity Helicopter?

I can not find any difference in the animation speeds.
Regardless whether I run it with D3D9Client or the inline client.

Attached you'll find my (release)build including any changes I did.
I only changed the one conversion to int in line 265 to get rid of the warning,

PHP:
but that definitely does not change anything regarding animations, as the assigned variable (TurnANGLE) is only used in HUD display code.


To exclude any obscure build-process differences I also added my solution and project files and all the added resources I had to add.