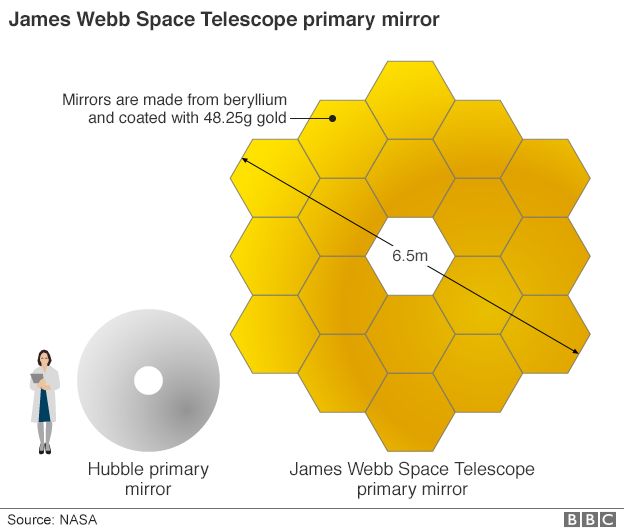 I never realised how big the mirror is compared to Hubble!

It would be a nice opening mission for a crewed Orion though: The first JWST repair mission

Title Inspecting JWST’s primary mirror
Released 21/11/2016 10:46 am
Copyright NASA–C. Gunn
Description
Before a spacecraft goes into space it must undergo rigorous testing to confirm it can withstand the violent vibrations and sounds during launch.
For the powerful 6.5 m-diameter telescope of the James Webb Space Telescope, or JWST, making the same measurements both before and after a simulated launch is a vital part of confirming its optics will not be adversely affected by the real launch.
In a recent ‘before’ test, engineers made highly precise measurements of the shape of the main mirror in a ‘centre of curvature’ test.
Click to expand...

Now if I shone a bright light on my little six inch telescope mirror, there's be a million little white dust specks glaring back at me...

By the way: does anyone know how much involvement ESA has in the James Webb telescope? I gather for Hubble ESA contributed 15% of the build and running costs, I just wondered what the ratio was for the Webb.

IronRain said:
It would be a nice opening mission for a crewed Orion though: The first JWST repair mission
Click to expand...

As far as I know, JWST is not designed to be serviced in orbit, unlike Hubble.

Yes it would be a nice mission to take a MPCV to the JWST. I have used the ODS from the Mir flights and used that as the mission module along with the MPCV and docked to the JWST in orbiter

#10: The observatory is assembled
21 December 2016 10:34
With less than two years remaining before its scheduled launch, the James Webb Space Telescope (JWST) has passed several major milestones, including the completion of its huge primary mirror and integration of its four science instruments with the payload module.
Click to expand...


#11: Preparing for the ride to space
21 December 2016 14:45
In the second half of 2016, the James Webb Space Telescope (JWST) was readied for an intensive series of environmental tests, an essential step in ensuring that it will survive the stresses of launch and complete its groundbreaking survey of the infrared sky.
Click to expand...

Is anyone making a orbiter version of this?
I found this.

Don't know If this has been mentioned, but.
We had a shuttle program.

If we separate the telescope in three parts.

Could not the 1st (mirrors) part have been launched and assembled by the
Space shuttle program. It seems to be the most likely place
to have terminal anomaly, with this design.

Number 2 and 3 could be launched separately on rockets, and timed so that all 3 parts are orbiting as loose group

Another shuttle launch could be used to gather and assemble all 3 parts, and it might give it some help putting it into proper orbit.

Sure it might be expensive, but much higher chance of success, than the
current strategy.

No, the shuttle wouldn't have worked, as JWST is intended to operate at the Earth-Moon L2 point, far beyond the reach of the shuttle.

Assemble it in LEO using STS or equivalent, then after check out, boost it to its final station.

It's not rocket science. Well...it kind of is, but you know.

Andy44 said:
Assemble it in LEO using STS or equivalent, then after check out, boost it to its final station.

It's not rocket science. Well...it kind of is, but you know.
Click to expand...

Then you have the stresses from powered flight while deployed to consider.
A

It was my intent in the prior statement, that the JW telescope would be assembled in LOE in range for shuttle crew assembly to be possible. SEE
ION Drive Below.

The mirror structure and its framework/active mounting points seems to be particularly sensitive to faults with the current plan for self-deployment
shuttle astronauts could have helped there.

You can attach an ION drive to the assemble Fully deployed scope, and spiral out to the desired orbit, it can be as slow as you need to
avoid damage to telescope.

But the cost of doing it the way I suggested is probably 2 to 3 times higher than the unfolding origami trick NASA has planned.
A

that image of the Hubble to person to JWB can be Modified to another effect. 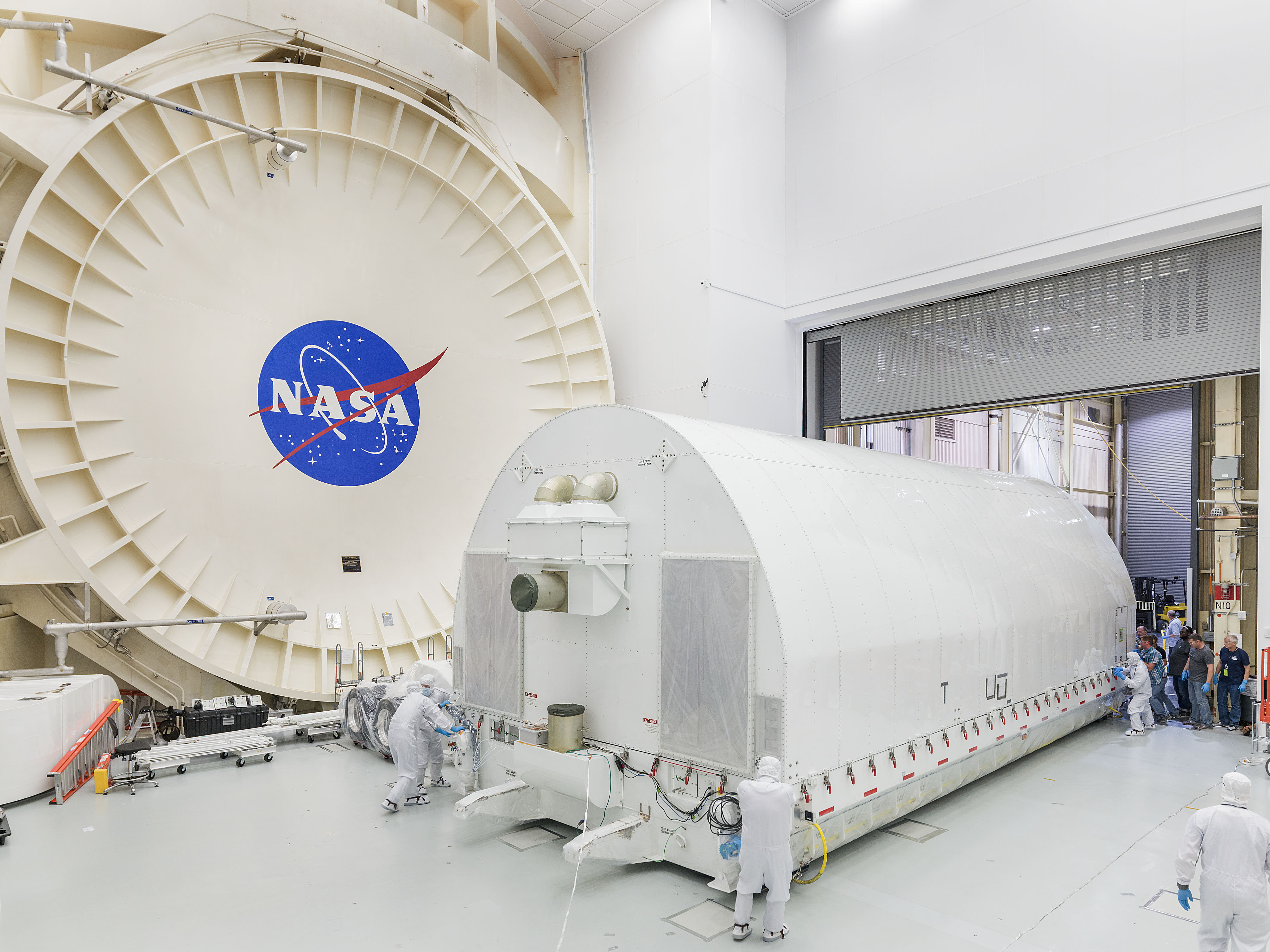 The James Webb Space Telescope is pushed into the clean room of Building 32. Building 32 houses Chamber A, the thermal vacuum chamber where the telescope will have its final thermal vacuum testing. Credits: NASA/Chris Gunn
Click to expand...

NASA's James Webb Space Telescope has arrived at NASA’s Johnson Space Center in Houston, Texas, where it will undergo its last cryogenic test before it is launched into space in 2018.

The biggest and final cryogenic-vacuum test occurs in Johnson's Chamber A, the same vacuum chamber where Apollo spacecraft were tested. This test is critical in that it will verify the performance of the whole telescope as a system end-to-end at its extremely cold operating temperatures. Subsequently, the telescope will continue on its journey to Northrop Grumman Aerospace Systems in Redondo Beach, California, for final assembly and testing with the spacecraft bus and sunshield prior to launch in 2018.
Click to expand...