I still wouldn't consider it fair to compare Interstellar to Armageddon; the latter has 168 scientific mistakes.
Click to expand...

And yet, those 168 scientific mistakes aren't nearly as key to the plot as some of the stuff in Interstellar--and several of the mistakes are made in order to improve the plot, an excuse that Interstellar doesn't have. How many of those 168 are minor? I'm sure if you started nitpicking Interstellar, you'd find quite a few mistakes, too.

In general, I found the film amazing. I'm not one of those people that doesn't get too into the sciencey stuff, at least not on the first watch. There were some obvious mistakes made, but the beauty of it compensated for them. As for small other mistakes, well, a level 9000+ nerd would be quite offended, but for most of us I think that they were okay.

But guys, this is Hollywood. This is not a film for space lovers, this is a film for the general public who doesn't give a damn about physics or space, but rather to have a great time and enjoy themselves. People could make perfectly accurate space films, but as an industry, the money generated by would make the companies shut down the project (remember when Georges Lucas submitted his film, but was turned down because the whole series was a show for kids and that the story was a little too close to real events? Well that was Star Wars that he was submitting, and it's only after some time that he got to do the 3rd to 6th episode. Yes, it's one of the most successful series, but the film industry didn't want it because it wouldn't make enough money, they thought).

Also, there was the hype, with the media and all: "accurate space film", "a story about space travelling", "ERMAGHERD look at this black hole they made !". It was the same with Gravity, as we do here with Interstellar, we criticized Gravity for its mistakes and plot holes. But hey, you got to look at that sexy Earth during that film! And here you get to take a glance at how beautiful and mysterious a black hole is.

I was more than happy to hear random people's reaction when exiting the theater. Generally it was in the "Well, that was awesome" tone, and at least one people (and I got to talk with him a little with that, that was cool) gained interest in blackholes/wormholes.

And, doesn't this film deserves extra style points for describing more or less well the Relativity theory to the average audience?


"Nothing is perfect" is what I'd say about this film, but I pretty much consider it a Top Model of the sci-fi movies nonetheless. Must watch at least once I recommend for all of you, space lovers. :thumbup:

Why can't a big Hollywood production be largely accurate? Although it's been a while since I've watched either, 2001, and to a lesser extent 2010, have less significant scientific mistakes. I don't recall 2001 having the kind of ridiculous dialogue that appears in Interstellar just because it's a Hollywood movie. Still, 2001 and Interstellar are both similar in scope. The incredible ending of 2001, although far-fetched, fits the "sciency" feel of the movie. Vagrefgryyne pyrneyl gbbx vafcvengvba sebz 2001'f raqvat naq fgne tngr frdhrapr jura Pbbcre sryy vagb gur oynpx ubyr, juvpu jnf cerfragrq va n zhpu zber fgenvtugsbejneq jnl guna va Xhoevpx'f svyz. Both Interstellar and 2001 have scientific elements that weren't well understood at the respective times of their creations, yet 2001 did a much better job of avoiding the reliance on fantasy to advance the plot.

Then there are science fiction movies that are entirely plausible and still manage to be fantastic. If Moon wasn't such a limited release, it probably would have saw even more success.
Last edited: Nov 19, 2014

Apollo 13 was by-and-large the most accurate spaceflight film (imo) and that was pretty popular in the box office, but that wasn't science fiction.
Last edited: Nov 19, 2014

Though that's not really a spoiler, I guess.

Here's a review from a photographer who graduated with an Physics degree specializing in cosmology http://blog.mingthein.com/2014/11/20/interstellar-the-movies-and-the-creative-state-of-play/

Here's the most important part of his review, decode with www.ron13.com

I definitely enjoyed it more than Gravity. You really have to kind of get over yourself when it comes to films like this. It will never be 100% accurate, for the sake of the plot alone. The fact that they put any effort in is enough for me. That's more than you can say for many popular sci-fi films.

Bit of a headache, isn't it? What happened to spoiler text?

I'm sorry to say that this is not 2001, and it does not even come close to Inception. That's not because there are physical impossibilities or plot holes. That's because I have a major issue with the philosophical outlook presented.

When discussing the movie's science, I remembered some climate effects I hoped to see in the film. Interstellar lightly explained what caused the environmental problems on Earth, but I think my speculation from months before the movie was released can be substituted as a sufficient, if not better, alternative.

I expect this community is informed enough to discuss the potential effects of global warming without descending into a senseless debate about whether they're real or not. As I said before, some discussion about global warming should not be controversial and shouldn't need moderation. At least in Interstellar, global warming can be an alternative explanation for how Earth becomes inhabitable.

In summary, I think that global warming is a perfectly sensible motivation to leave Earth in a movie like Interstellar.

Look no further than Europa Report to find another movie that needlessly risks human lives, in this case by going to Jupiter, to create drama.

A still from one of the effects scenes: 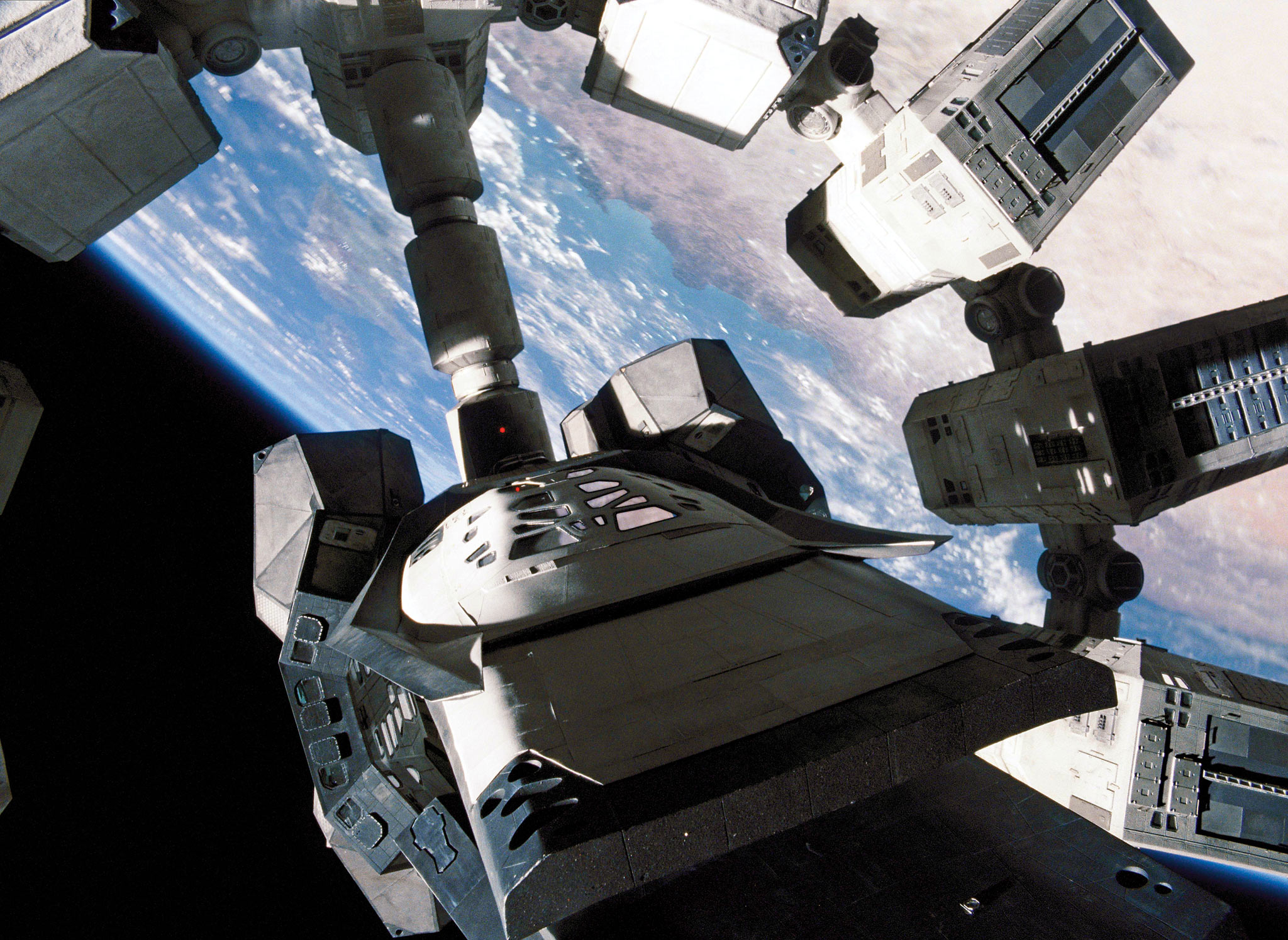 Is... is that dust on the ranger's prow? If so, wow. CGI is remarkable these days.

Jacek Dukaj (arguably Poland's best SF writer) wrote a review of Interstellar. It is in Polish, so below is a translation of some highlights (without spoilers):

Even after the space tourism becomes common place, any movie with vaccuum and stars in the background will be automatically classed as sci-fi -- even if it is a gay love story aboard Soyuz-Apollo.
Click to expand...

Sci-fi cinema for a long time has been behind literature -- some 30, 40 years -- and the distance is increasing.

From where comes this extraordinary difficulty in translating one medium into another?

Hard SF -- science fiction taking science seriously -- being two-three steps ahead of advancing science has so far departed from the knowledge of a common reader, that understanding the story and concepts ruling its world, requires:

(A) the reader to be a highly educated specialist

Back at the start of the 20th century, when Wells was writing his scientific fictions, the concept of time travel or invasion from Mars was understandable for everyone. Half of a century later (and that was the era of a greatest technological optimism), the American Golden Era SF still maintained good contact with the majority of readers: they would read Popular Science, or at least remember what they were taught in physics, maths, and biology classes. At the begining of the 21st century, hard SF operates on the knowledge horizons of PhD holders in cosmology, quantum mechanics, philosophy of mathematics, molecular biology, or cognitive science.

Nolan does not refrain from emotional blackmail of Nicholas Sparks and [Paulo] Coelho (Love is the only thing which transcends time and space). This fits with hard SF like Paris Hilton fits with a slide rule.
Click to expand...

Although I still cannot stomach the black hole physics, I watched Intertellar with authentic joy. Here is a high-budget SF flick, which an adult can watch without an impression that the director and screenwriter think that he is a 12-year-old with an ADHD. That's a real rarity; we will use it as a counterexaple to standard Hollywood productions for years to come.
Click to expand...

Izack said:
A still from one of the effects scenes:

Is... is that dust on the ranger's prow? If so, wow. CGI is remarkable these days.
Click to expand...

Interesting to note that instead of using green screens and adding the background in post, they actually did the effects first, then projected it behind the models and sets.

Which reminds me is what has been done in Oblivion, and works wonders for reflections and simplify lightning artists a whole lot. The only negative side is no hard shadows, which are important to mimic space images, but I guess miniature models and/or CGI comes here into play rather easily.

This was also the goal of the Light Cube in Gravity: get all the colors protected and reflected in the actors' faces and eyes and glass, which is far easier than green screening and computing all the light rays to remove the reflected green.

So I read the book upon its release and loved it, I thought it had a powerful, and meaningful plot that really touched base on some real issues that humanity face. So I decided to finally see the movie in IMAX for the best experience. Overall the movie was amazing, it had fantastic visuals, great soundtrack, superb acting from Matthew McConaughey, Ann Hathaway, and as well as others so I really enjoyed it, although it wasn't as meticulous as I'd hoped. The emotion was really there for the movie, as I sat there in awe, amazement, and sorrow, it was simply overwhelmingly beautiful. I felt it had a somewhat Carl Sagan touch to it like Contact. This is a must see for anybody! Even the average science layman.

I must say I was a little disappointed - The ovie was good, but it could have been so much better and ... well I have no problem with a fictional movie having some logicac flaws or unrealistic elements, but if it could be prevented so easy...

For once, you have a testpilot who has about 2 years to prepare for flying a spacecraft through a wormhole and about 5 minutes before entry he gets a basic explanation on what a wormhole is.

And withou spoiling - there is something on a planet they could have seen from space and they are SOOO surprised about it.

Well I guess theres already enough discussion on mistakes and realism in this movie, so I'll just give my statement: The movie was cool, but I did expect more, so I was still disappointed - and TARS was awesome

To be fair, I don't think you can really train anyone to go into a wormhole.

HAL9001 said:
and about 5 minutes before entry he gets a basic explanation on what a wormhole is.
Click to expand...