gp said:
...I have included four .ld files that Ugo Palazzo sended to me...
Click to expand...

I'm having problems with 0.96.1 - the miss distance display is appearing only for a split second and then vanishes, most of the time it shows PeA instead of landing site coords.

And is it possible to show crossrange and downrange errors in addition to the overall miss distance?

I tried to sample the LD figures for the CEV capsule, but could not produce a .ld file :hmm:

Is there a maximum altitude limit for the sampling process? With the capsule the ability to do loops ends at ~60 km. Below that the RCS is too weak to force it into a loop against the aerodynamic forces.

Has the Shift key to be on the side where the MFD is called up? (L-Shift or R-Shift)

Is it possible to generate an *.ld file manually via a spreadsheet, using L/D formulas?
(I assume the syntax is "AoA Lift Drag".)

I'm building polars from vessel callbacks, the amount of data is staggering since unlike Aerobrake, in-sim polars depend on Mach number, and (in some cases) also vary with altitude (Reynolds number). Can include this function into the next release of Precession, but conversion to .ld files would have to be done by the user in Excel.

EDIT: yes, you can use Excel. The angle is in radians, but the values are Scl and Scd AFAIR (that is cL and cD multiplied by reference area).

Thanks for the quick answer!

I have no idea how to generate the ALT and AOA tags, so I omitted them.

I named the file after the vessel-class (CEV-Orion.ld) but AerobrakeMFD seems not to use it. The calculated glidepath jumps when the ressource module is jettisoned, and it does not consider the lift of the tilted capsule, leading to an overshoot.

I guess this a little more difficult than I thought ...

francisdrake said:
...Is there a maximum altitude limit for the sampling process?...
Click to expand...

gp said:
...To obtain this file you have to put your ship in the atmosphere and do a loop....
Click to expand...

In this thread (Forum Orbiter Italia), gp says "under 200km for the Earth".

Thanks for the Italian link! ... Google translator helped also a lot

When I look on the MFD page displaying lift and drag the numbers are shown and ok during the loop. But Shift-S seems to trigger no reation.

There is a new function added, no docs about it anywhere - (Shift-U IIRC) and it is supposed to set "Touchdown altitude". What is this function about? Could it be the culprit of the eternal switching bug? Due to the bug, Aerobrake 0.96 is now usable only as an autopilot, while 0.95 silently crashes Orbiter when I press Ctrl-Q.

I couldn't figure out the AeroBrake MFD at first, so I was trying to re-enter by trial & error. (Doing a retro-grade burn on the opposite side of the planet from my landing destination to bring the PeA down ... and then seeing where I would end up just by using the Level and Kill Rot programs.)

After a couple of attempts with that method, I just happened to notice that the AeroBrake MFD was giving me information I could understand when my Delta-glider was level with the horizon and facing toward the direction of flight.

So then it dawned on me to reset the scenario ... (get back to the far side of the planet) ... and before doing any corrective burns, to Level out the Delta-Glider and make sure it was facing the direction of flight. I then opened the retro engine doors and fired them slowly ... and watched as AeroBrake performed its "magic". (It felt like magic indeed.)

So ... first I'd like to say: AeroBrake is great. I can't fathom trying to calculate how much to burn without the use of this MFD. One thing I realized in my trial & error phase was that once I figured out how much to bring my PeA down by in order to hit my target, that would only be valid for that 1 specific situation. A subsequent re-entry from another starting altitude would be completely different.

Finally, I'd like to find out if I'm using this MFD correctly? (It worked for me, so I guess in that regard, I'm using it right.) But what I mean is, do you have to level out the Delta-glider first? With the other MFD's, it doesn't matter if you are prograde, retrograde, normal, anti-normal, or some other random direction altogether. You "play with the numbers" in the MFD, and then orient yourself as needed.

With AeroBrake, I assumed it was the same thing. But from a prograde position (e.g. a standard orbital attitude where you are "sideways" with the planet), the AeroBrake MFD seems to give gibberish information.

My thinking is that I am trying to calculate WHEN and HOW MUCH to burn. That seems to be the way MFD's usually work. Can AeroBrake do that?

It seems to me that what AeroBrake is doing is taking your present situation and calculating where you will end up based on your current orientation, attitude, velocity, and so on.

Is that just the way this particular MFD works? Or is there a way to give it a set of assumptions (like the Transfer MFD), so you can see what different AoA's would do.

Glideslope MFD would better suit this need (retroburn planning). Aerobrake MFD assumes constant AoA and bank, so it's not accurate if you do roll reversals.
G

Hi blixel,
Aerobrake has the HdV option to calulate the gliding path at a different speed than your actual speed.
So you can, for example, set it at 500. The gliding path will be that you will fly AFTER a deorbit burn with that deceleration.

As a reminder, i would suggest button to set up actual mass of the capsule after seperation from service module before reentry (otherwise it will calculate wrong path).

1. Shift-S is not working for cev-e/cev-orion (no ld files) but for pegase is partly ok (records only PID info). MFD shows cev-e like cev-e/cev-e.
2. Recording of L/D is not working for capsules probably because they have 180 deg AoA (heatshild to prograde). I wont get any record of lift/drug per degree numbers in *.ld while in atmosphere. Cevs show good l/d values for 180 deg aoa attitude in upper numbers of mfd, but pegase - not at all, all zeros - you need to rotate the capsule wrong way to see l/d, and it will not save it in ld anyway. Numbers in buttom part of mfd (max/min l/d, min vel...) are inproper for me.

3. I would suggest to add service buttons on the second page of mfd if possible, with 'save to .ld file' with brief explanation and 'change mass' button to change mass of the capsule after sep for proper calculation before retroburn (repeating myself ).

Made it thru the night so more feedback later if you want. Thanks
D

I think vertical speed and acceleration at touchdown should be very useful in order to determine vessel survival, just as maximum G. In fact, it's G at the time of landing.

By the way, there seems to be a problem with distance to target determination on Graph/Map page. In flying to Kagoshima, for instance, I have seen that target is getting farther in Map MFD while Aerobrake MFD shows it's getting closer. Distances to target differ in Aerobrake and Map.

This (IMHO essential) MFD seems to be working fine in Orbiter2016 for me so far.
A

The Shift-S save profile doesn't seem to be working for me in Orbiter 2016 with AMSO. Are there any alternative procedures to generate/save a ld file? Nothing happens when I press either shift+S combination (left and right), no file is saved in the modules folder. Any suggestions? Aerobrake seems to be making inverted projections (positive AOA leads to more G's and shorter trajectory in the Aerobrake track while in game they correctly do the opposite).

Are you prograde and inside the atmosphere (<200km) when making your 360° flip before pressing SHIFT-S??
Which shift key you must press depends on which side you opened AerobreakeMFD on.

This is our FOI thread (in Italian) where AerobrakeMFD's author himself explains what to do:
https://orbiteritalia.forumotion.co...eare-i-file-di-configurazione-di-aerobrakemfd
Last edited: May 22, 2020
A

Thanks for the reply, yes I am in the atmosphere when flipping to make the AOA/L/D plot. Here are some screenshots: 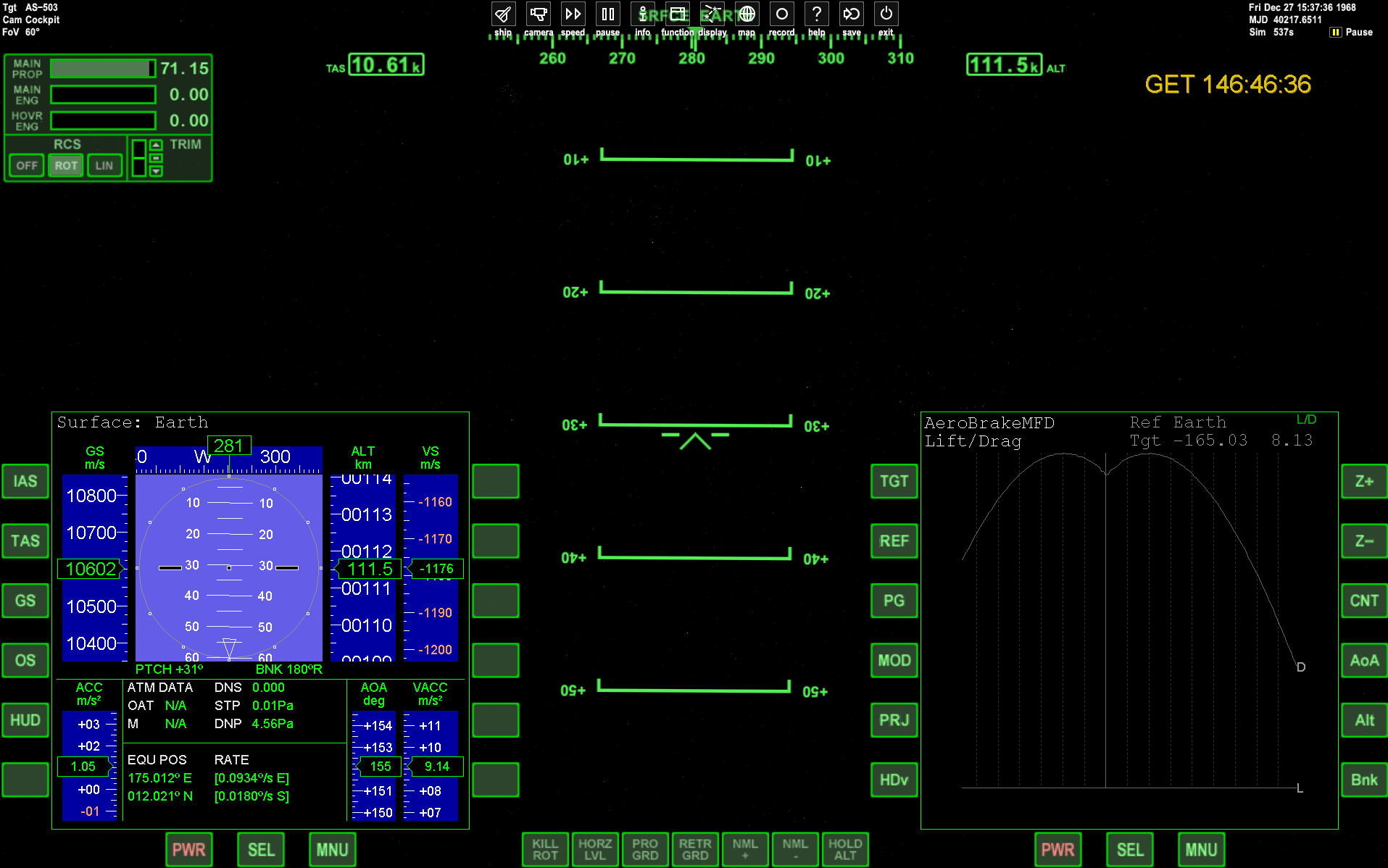 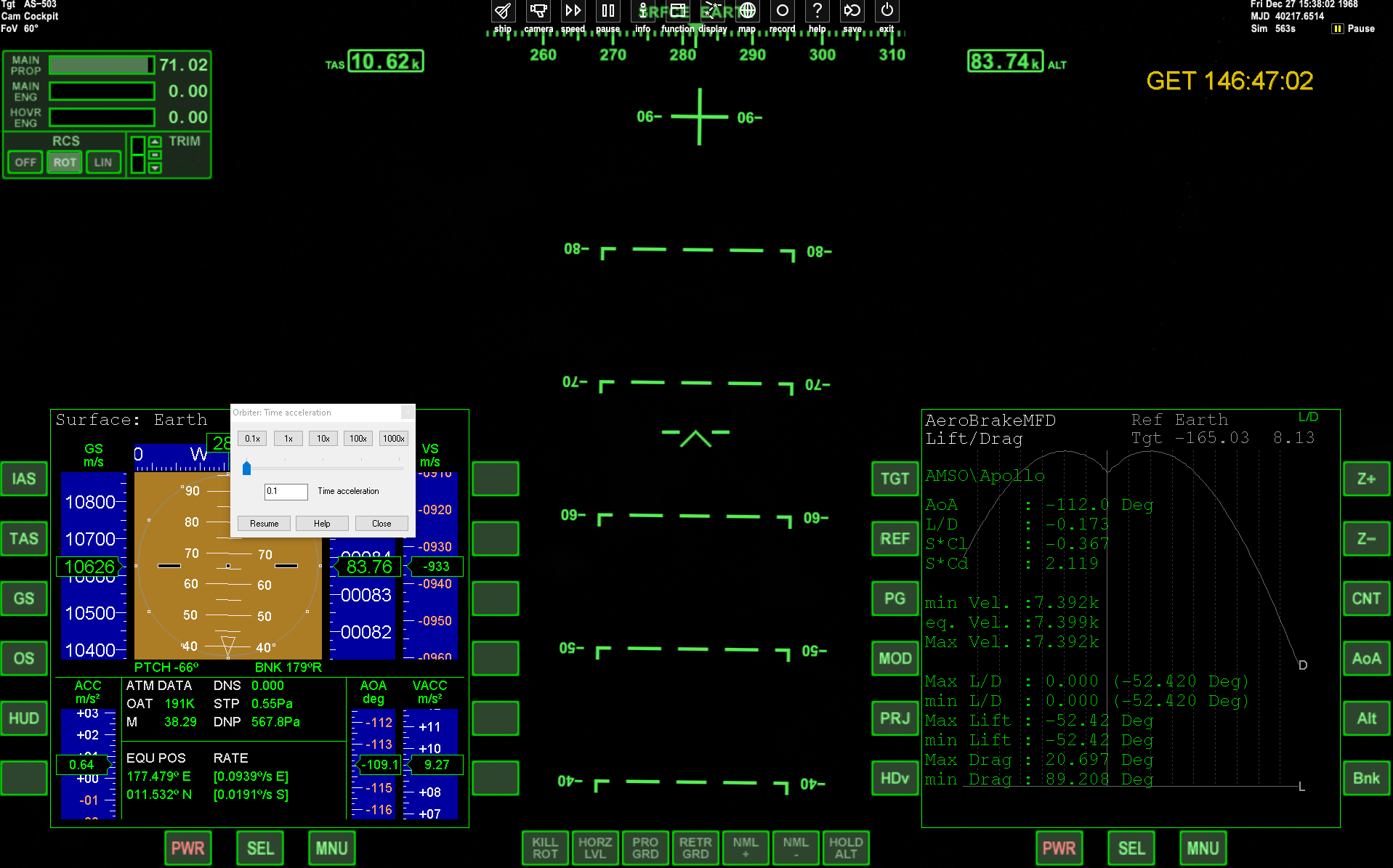 I put the capsule in a flip at around 200km, and kept it up while descending all the way. Aerobrake MFD is on the right, so I press right shift + S, and still no LD file in the modules/plugin folder.

As you can see the AOA plot on the MFD only covers +- 60 AOA? I'm sure it collects data for the remaining part of the circle (the .ld files that come with it have data for the full 360 degrees), but with capsules the valid range you can re-enter at is usually between - 145 and + 145 AOA (re-enter in a retrograde orientation).

Even disregarding the profile saving problem, the calculations still seem to be backwards in Aerobrake; when I pitch to positive AOA, the capsule correctly generates lift in orbiter, but Aerobrake MFD starts warning me about crazy high anticipated G's and the trajectory really shortens when it should be the opposite.

Again, it seems like aerobrake MFD is doing the right calculations, only that it's backwards just when you have a capsule and come in retrograde as opposed to prograde like a space plane.