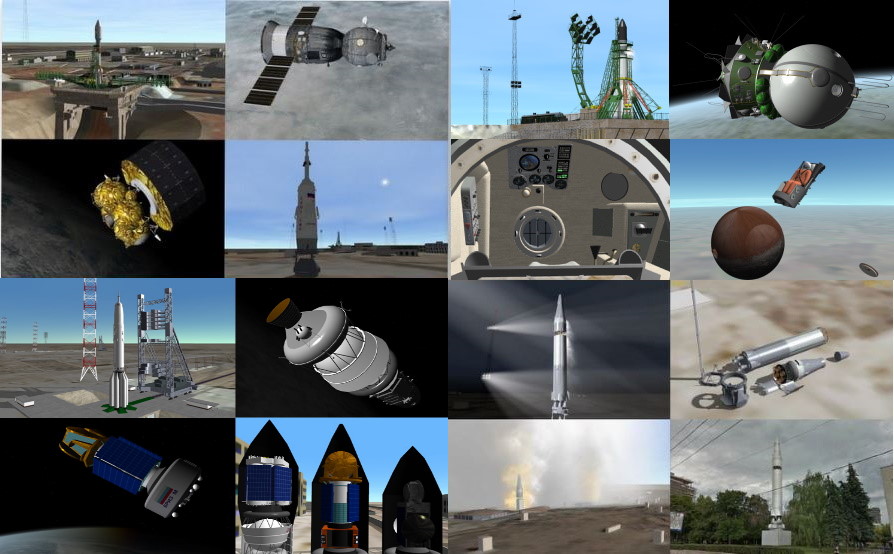 This version is for Orbiter 2016. Use alternative pack for Orbiter 2010.Warning: these addons are still optimized for Orbiter 2010, and have many deficiencies in Orbiter 2016, mostly regarding ground operations and rendering. I am still working on potential fixes...
Updated in May 2021.
Collection of historical and modern Russian addons, previously published separately, now consolidated in a single pack.
These addons are
implemented with the (still experimental) VesselM development library. Each addon package can be downloaded individually - select
only the ones you want (or need for dependency).
Historical Spaceports addon is a prerequisite for all other addons in this package.Collectors Addition addon requires all other addons to be installed.Be sure to carefully read all manuals in the addons you download.HISTORICAL SPACEPORTS V1.5

"Landscaping"
surface bases for multiple sites across the vast spaces of Baikonur
Cosmodrome (with some newer Soyuz launchpads placeholders in other parts
of the world). Serves as a background for other historical addons.
Dense area buildups, accurate to specific time periods. Mockups of the
launch facilities, replacable by real launchpad "vessels" in dependent
historical addons. Demo scenarios set in an isolated Solar System.
This version drops dependency on separate Orbiter 2016 Patch.

1957...
1958... 1959... 1966... Just spelling out these numbers sends
goosebumps down the spine of every space enthusiast. The whole universe
lies out there - virgin, untouched, waiting for the first visitors...
And the visitors finally came - in flocks!
Most of
the first discoveries during this fantastic period were accomplished by a
country, that is not on the globe anymore. Soviet Union started the
Space Race with the launch of the planet's first satellite, and, in the
following decade, had scored quite an impressive list of 'firsts' in the
race, forcing the USA to take space flights seriously.
Many of Soviet Union's historical space achievements are recreated in this "educational" addon. Welcome to the history!

R-9
is a truly legendary Russian ICBM. Due to a complete secrecy blackout,
its name and history was totally unknown to the general public till very
end of the Soviet Union.
Yet, for most of these
years, the missile itself had been displayed - unnamed and unlabeled -
in plain sight, on Moscow street, in front of the USSR Armed Forces
Museum. No doubt she had been selected for this display due to its
remarkable deadly elegance, standing out among the other, more
utilitarian missiles.
This addon pays tribute to
this almost forgotten gem of the rocketry history, and to the people who
created it in the early years of the Rocket Age.
VOSTOK V1.3

This
is a "bonus pack" for those who download and install all other addons
in this pack (and their prerequisites). Scenarios supplied in this pack
demonstrate how you can mix and match vessels from different
VesselM-based addons (preferably based on the same VesselM version), and
provide some extra eye-candy fun.

vcredist_x86.exe for Visual Studio 2015 redistributables is provided in Downloads in case your machine does not have them.