Yet another test for general relativity

astronomynow.com : Yet another test for general relativity; yet another “A” for Einstein


Einstein’s understanding of gravity, as outlined in his general theory of relativity, predicts that all objects fall at the same rate, regardless of their mass or composition. This theory has passed test after test here on Earth, but does it still hold true for some of the most massive and dense objects in the known universe, an aspect of nature known as the Strong Equivalence Principle?

An international team of astronomers has given this lingering question its most stringent test ever. Their findings, published in the journal Nature, show that Einstein’s insights into gravity still hold sway, even in one of the most extreme scenarios the Universe can offer. In 2011, the National Science Foundation’s (NSF) Green Bank Telescope (GBT) discovered a natural laboratory to test this theory in extreme conditions: a triple star system called PSR J0337+1715, located about 4,200 light-years from Earth. This system contains a neutron star in a 1.6-day orbit with a white dwarf star, and the pair in a 327-day orbit with another white dwarf further away.

“This is a unique star system,” said Ryan Lynch of the Green Bank Observatory in West Virginia, and coauthor on the paper. “We don’t know of any others quite like it. That makes it a one-of-a-kind laboratory for putting Einstein’s theories to the test.” Since its discovery, the triple system has been observed regularly by the GBT, the Westerbork Synthesis Radio Telescope in the Netherlands, and the NSF’s Arecibo Observatory in Puerto Rico. The GBT has spent more than 400 hours observing this system, taking data and calculating how each object moves in relation to the other.

How were these telescopes able to study this system? This particular neutron star is actually a pulsar. Many pulsars rotate with a consistency that rivals some of the most precise atomic clocks on Earth. “As one of the most sensitive radio telescopes in the world, the GBT is primed to pick up these faint pulses of radio waves to study extreme physics,” Lynch said. The neutron star in this system pulses (rotates) 366 times per second.

“We can account for every single pulse of the neutron star since we began our observations,” said Anne Archibald of the University of Amsterdam and the Netherlands Institute for Radio Astronomy and principal author on the paper. “We can tell its location to within a few hundred meters. That is a really precise track of where the neutron star has been and where it is going.”

“If there is a difference, it is no more than three parts in a million,” said coauthor Nina Gusinskaia of the University of Amsterdam. This places severe constraints on any alternative theories to general relativity. This result is ten times more precise that the previous best test of gravity, making the evidence for Einstein’s Strong Equivalence Principle that much stronger. A triple star system made up of two white dwarfs and a compact pulsar, imagined here by an artist, provides a natural laboratory to test Einstein’s theory of general relativity and its claim that objects fall at the same rate regardless of mass or composition. Spoiler alert: Einstein is right again. Image: NRAO/AUI/NSF; S. Dagnello


{...}
Using the MUSE instrument on ESO’s VLT, a team led by Thomas Collett from the University of Portsmouth in the UK first calculated the mass of ESO 325-G004 by measuring the movement of stars within this nearby elliptical galaxy.

Collett explains “We used data from the Very Large Telescope in Chile to measure how fast the stars were moving in ESO 325-G004 — this allowed us to infer how much mass there must be in the galaxy to hold these stars in orbit.”

But the team was also able to measure another aspect of gravity. Using the NASA/ESA Hubble Space Telescope, they observed an Einstein ring resulting from light from a distant galaxy being distorted by the intervening ESO 325-G004. Observing the ring allowed the astronomers to measure how light, and therefore spacetime, is being distorted by the huge mass of ESO 325-G004.

Einstein’s general theory of relativity predicts that objects deform spacetime around them, causing any light that passes by to be deflected. This results in a phenomenon known as gravitational lensing. This effect is only noticeable for very massive objects. A few hundred strong gravitational lenses are known, but most are too distant to precisely measure their mass. However, the galaxy ESO 325-G004 is one of the closest lenses, at just 450 million light-years from Earth.

Collett continues “We know the mass of the foreground galaxy from MUSE and we measured the amount of gravitational lensing we see from Hubble. We then compared these two ways to measure the strength of gravity — and the result was just what general relativity predicts, with an uncertainty of only 9 percent. This is the most precise test of general relativity outside the Milky Way to date. And this using just one galaxy!”

General relativity has been tested with exquisite accuracy on Solar System scales, and the motions of stars around the black hole at the centre of the Milky Way are under detailed study, but previously there had been no precise tests on larger astronomical scales. Testing the long range properties of gravity is vital to validate our current cosmological model.

These findings may have important implications for models of gravity alternative to general relativity. These alternative theories predict that the effects of gravity on the curvature of spacetime are “scale dependent”. This means that gravity should behave differently across astronomical length-scales from the way it behaves on the smaller scales of the Solar System. Collett and his team found that this is unlikely to be true unless these differences only occur on length scales larger than 6000 light-years.

“The Universe is an amazing place providing such lenses which we can use as our laboratories,” adds team member Bob Nichol, from the University of Portsmouth. “It is so satisfying to use the best telescopes in the world to challenge Einstein, only to find out how right he was.
{...}
Click to expand... 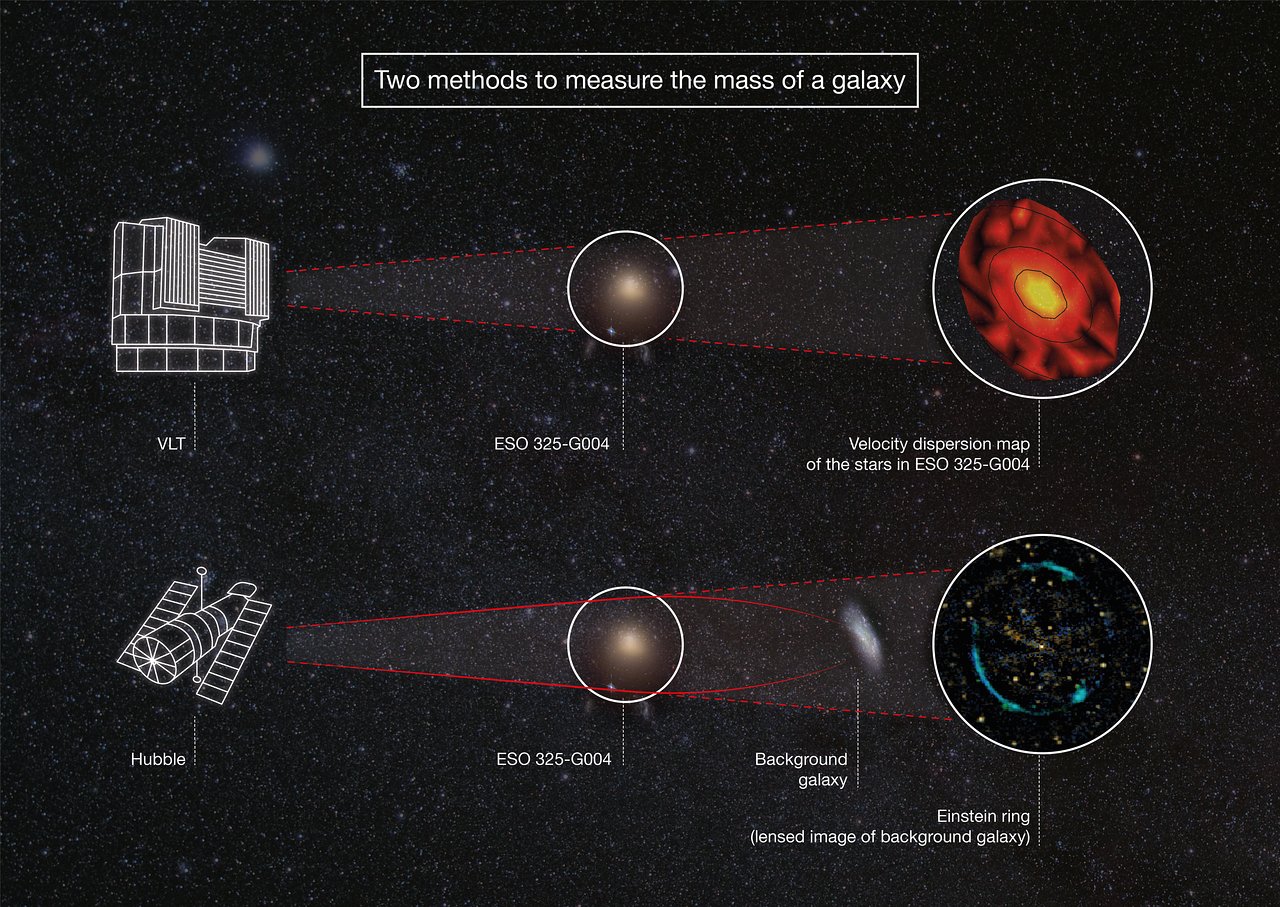 This infographic compares the two methods used to measure the mass of the galaxy ESO 325-G004. The first method used the Very Large Telescope to measure the velocities of stars in ESO 325-G004. The second method used the Hubble Space Telescope to observe an Einstein ring caused by light from a background galaxy being bent and distorted by ESO 325-G004. By comparing these two methods of measuring the strength of the gravity of ESO 325-G004, it was determined that Einstein’s general theory of relativity works on extragalactic scales — something that had not been previously tested. Credit: ESO, ESA/Hubble, NASA 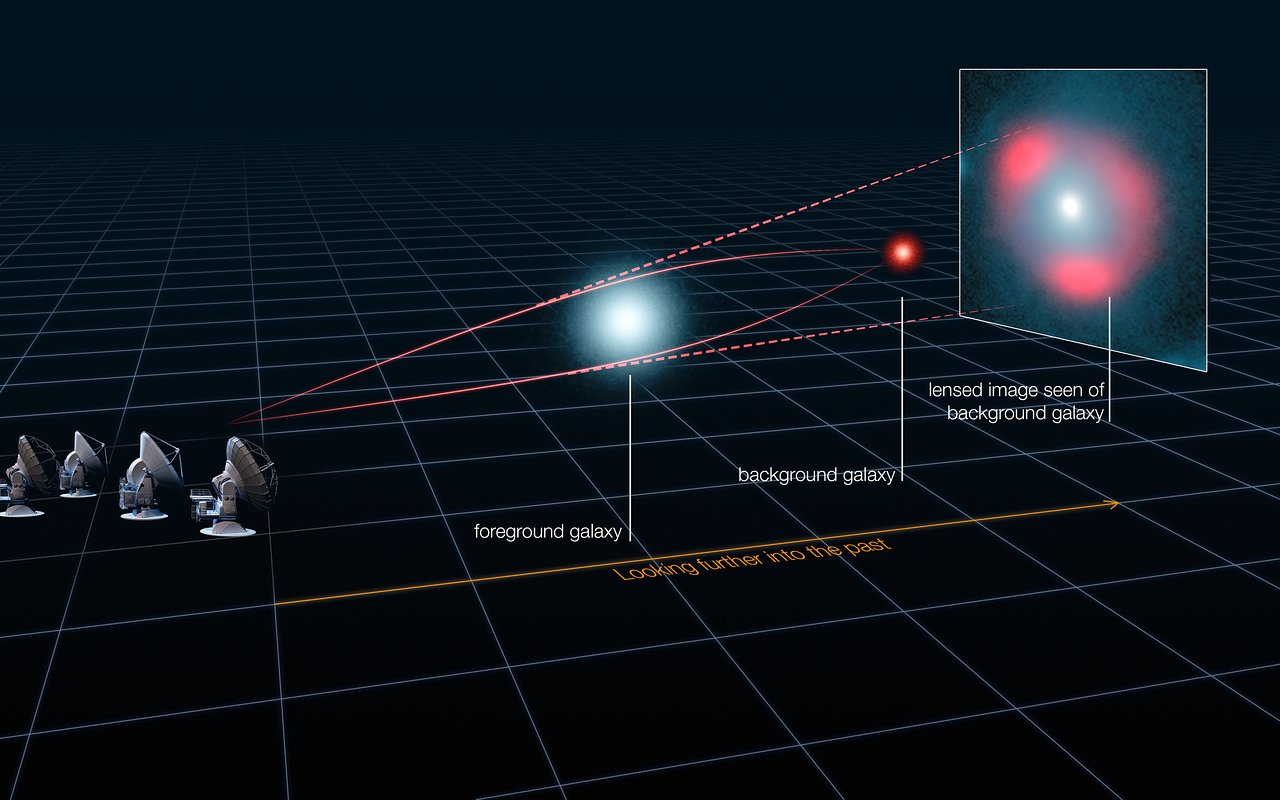 This schematic image represents how light from a distant galaxy is distorted by the gravitational effects of a nearer foreground galaxy, which acts like a lens and makes the distant source appear distorted, but brighter, forming characteristic rings of light, known as Einstein rings. An analysis of the distortion has revealed that some of the distant star-forming galaxies are as bright as 40 trillion Suns, and have been magnified by the gravitational lens by up to 22 times. Credit: ALMA (ESO/NRAO/NAOJ), L. Calçada (ESO), Y. Hezaveh et al.


[ame="https://www.youtube.com/watch?v=6Gd4-cCKnpg"]Interview with Thomas Collett about the research - YouTube[/ame]​
Last edited: Jul 6, 2018
You must log in or register to reply here.

Scientists confirm the Milky Way has a supermassive black hole