There is a ring of stars in the sky, around the Earth, brighter than the Sun, invisible to our eyes, called the geostationary TV satellites.

Some geostationary satellites photographed in the visible band with some airglow

It is 20x 4min exposures, the gif is being animated in reverse and taken from 63ºN latitude, so the equator is towards the South. The stars should be moving from left to right.
Click to expand...

Here, I edited out everything that moved. 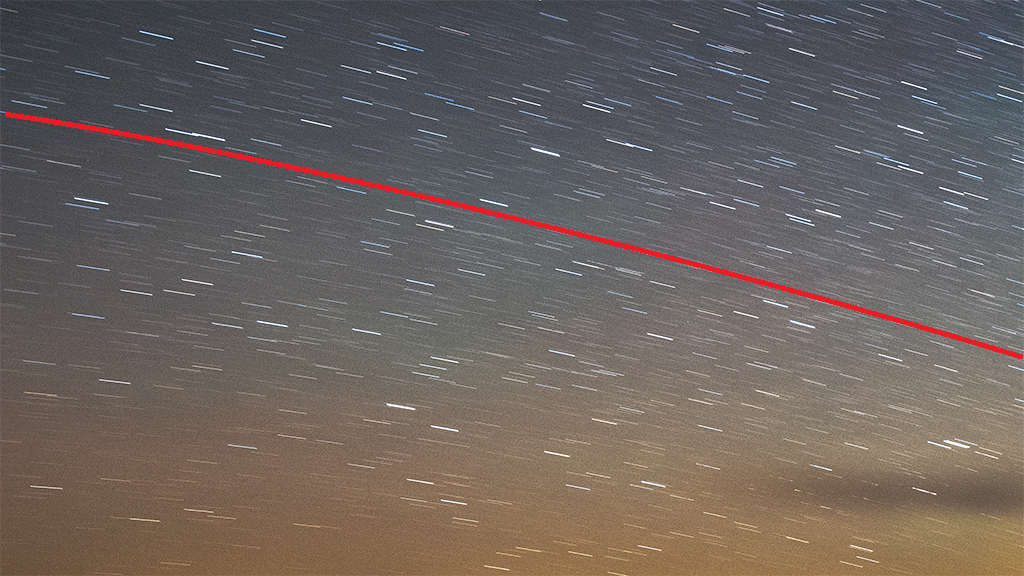 October 17, 2013. In the center of the picture, the most striking is the satellite which produces "Tricolor" effects, and the third to the left of it (little red dot) is the weather satellite Meteosat 7. It is lower than the others, because strongly "hanging out" in the orbit of 15 ° to 29 ° adjustment.

This setting is a two-coordinates scanning device. It has a range of 10 GHz, frequencies where TV satellites operate. Originally planned to take photo of the geostationary orbit. In addition to this, it was interesting to look at the sun, as well as, from the category of what children's curiosity wanted to know, such as the Moon etc...

The device used mesh parabolic antenna, a converter on the range 10-12 GHz, two-axis rotary device with a specially designed remote control software written for the PTZ control. To digitize the level of the logarithmic level converter AD8313, the ADC MAX1236, the controller sends information to the COM-port. The program that controls the rotary device receives data from the ADC, it adds to the time and marks and saves the file. The image is based on the simple but essential algorithm with coordinate accuracy of 1 degree, and the data are scaled to 10 readings per degree. Since in our case the plate rotates horizontally, the horizontal resolution reaches approximately 10 pixels per degree, and the vertical one pixel per degree. Full panoramic shot with a 360-degree width and height of 90 degrees takes about half an hour. The power converter can receive radiation with different polarization separately and have different images. These black-and-white images can be further colored. Few knows that the parabolic system with a head at the focus of the parabola has the capabiliy to focus not only on the satellites, but also to focus for example, the house next door, so you can get a clear pictures, where you can see the frame greenhouse, and even window frames!

An example of the telescope Top:Image focusing on satellites and on the ground
Bottom: At home, images of the satellites have become increasingly blurred

Initially, it was necessary to configure the entire system, with the satellite Eutelsat36B geostationary orbit at 36º East longitude set as reference point. When we received a positive result, we made a shot and saw the trees. They were very vague and an aura could be seen around them at some distance. After further improving the settings and post-treatment in Photoshop, it was determined that the aura of trees was only a electric power line.

Everyone knows that the Moon revolves around the Earth, in addition, an even brighter object can be seen: the Sun. Both are visible in the GIF animation.

Everybody who have tried to watch satellite TV in the rainy or snowy sky, when there is only one big dark cloud, knows that the quality of the received signal depends on the meteorological conditions. In this case it is obvious that the radio signal from the satellite is attenuated by the clouds. But there are other factors that affect the quality of reception, for example, radiation from the sun. We have seen that this happened often some time after a strong solar flares. Picture taken from weather satellites will show very strong noise as it affects the ionosphere, therefore creating noise.

We took this pictures during a sunny weather. The effect occured after sunset.

Flash on the ground

One day, during a periodic survey, long powerful flares that occupied most of the sky were seen. It's hard to get a real instant image. The time interval between each frames is 8 minutes.
If you have something to say about this outbreak, or just have something to add to this topic, please write in the comments.

Flash in the sky or on the ground?
Maybe it's just welding?
Click to expand...