The Italian Space Agency's AGILE satellite and NASA's Fermi Gamma-ray Space Telescope have together detected three bright gamma-ray outbursts from the nebula. The most recent outburst, in September 2010, lasted for four days and brightened the nebula by a factor of 6. Fermi's Large Area Telescope has recently detected two short-duration gamma-ray pulses coming from the Crab Nebula, which was previously believed to emit radiation at very steady rate. The pulses were fueled by the most energetic particles ever traced to a discrete astronomical object.

"Our belief of a stable Crab got smashed completely — now we have to think again," said Marco Tavani, an astronomer at the INAF-IASF (Istituto Nazionale di Astrofisica-Istituto di Astrofisica Spaziale e Fisica Cosmica) in Rome. Tavani was lead author of one of two papers announcing the discovery of the flares in the Jan. 7 issue of the journal Science.​

Tavani's team used the Italian Space Agency's AGILE satellite to observe flares in October 2007 and September 2010. Another team, led by Stefan Funk and Rolf Buehler at the SLAC National Accelerator Laboratory at Stanford University, observed the September 2010 flare as well, along with one in February 2009, using NASA's Fermi Gamma-ray Space Telescope.

"We were dumbfounded," said Roger Blandford, who directs the Kavli Institute for Particle Astrophysics and Cosmology, jointly located at the Department of Energy's SLAC National Accelerator Laboratory and Stanford University. "It's an emblematic object," he said. The Crab Nebula, also known as M1, was the first astronomical object catalogued in 1771 by Charles Messier. "It's a big deal historically," Blandford continued, "and we're making an amazing discovery about it."​

Blandford was part of a KIPAC team led by scientists Rolf Buehler and Stefan Funk that used observations from the Large Area Telescope, one of two primary instruments aboard NASA's Fermi Gamma-ray Space Telescope, to confirm one flare and discover another. Their report was posted online in Science Express alongside a report from the Italian orbiting telescope Astro-rivelatore Gamma a Immagini LEggero, or AGILE, which also detected gamma-ray flares in the Crab Nebula.

These are the first such gamma-ray flares to be seen from any nebula. The cosmic particle accelerator in the Crab is speeding up electrons and positrons to nearly the speed of light. As a result, the gamma rays they release are of higher energies than any others ever before seen from astrophysical sources.

"The acceleration is about 1,000 times more energetic than the largest man-made particle accelerators, including Fermilab's Tevatron in Illinois and CERN's Large Hadron Collider in Geneva", Tavani said.​

There are still many unanswered questions about the mechanism at work in the Crab Nebula, including why it flares up only periodically. The researchers hope to catch the Crab Nebula in the act of flaring up in the future, as well as to possibly observe the phenomenon in other nebulae.

"For 40 years, most astronomers regarded the Crab as a standard candle," said Colleen Wilson-Hodge, an astrophysicist at NASA's Marshall Space Flight Center in Huntsville, Ala., who presented the findings today at the American Astronomical Society meeting in Seattle. "Now, for the first time, we're clearly seeing how much our candle flickers."

For decades, astronomers have regarded the Crab's X-ray emissions as so stable that they've used it to calibrate space-borne instruments. They also customarily describe the emissions of other high-energy sources in "millicrabs," a unit derived from the nebula's output.

"The Crab Nebula is a cornerstone of high-energy astrophysics," said team member Mike Cherry at Louisiana State University in Baton Rouge, La. (LSU), "and this study shows us that our foundation is slightly askew." The story unfolded when Cherry and Gary Case, also at LSU, first noticed the Crab's dimming in observations by the Gamma-ray Burst Monitor (GBM) aboard NASA's Fermi Gamma-ray Space Telescope.

The team then analyzed GBM observations of the object from August 2008 to July 2010 and found an unexpected but steady decline of several percent at four different "hard" X-ray energies, from 12,000 to 500,000 electron volts (eV). For comparison, visible light has energies between 2 and 3 eV.

With the Crab's apparent constancy well established, the scientists needed to prove that the fadeout was real and was not an instrumental problem associated with the GBM. "If only one satellite instrument had reported this, no one would have believed it," Wilson-Hodge said.

So the team amassed data from the fleet of sensitive X-ray observatories now in orbit: NASA's Rossi X-Ray Timing Explorer (RXTE) and Swift satellites and the European Space Agency's International Gamma-Ray Astrophysics Laboratory (INTEGRAL). The results confirm a real intensity decline of about 7 percent at energies between 15,000 to 50,000 eV over two years. They also show that the Crab has brightened and faded by as much as 3.5 percent a year since 1999.

The scientists say that astronomers will need to find new ways to calibrate instruments in flight and to explore the possible effects of the inconstant Crab on past findings. A paper on the results will appear in the Feb. 1 issue of The Astrophysical Journal Letters. 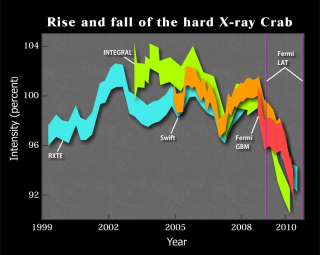 X-ray data from NASA's Fermi, RXTE, and Swift satellites and the European Space Agency's International Gamma-Ray Astrophysics Laboratory (INTEGRAL) confirm that the Crab Nebula's output has declined about 7 percent in two years at energies from 15,000 to 50,000 electron volts. They also show that the Crab has brightened or faded by as much as 3.5 percent a year since 1999. Fermi's Large Area Telescope (LAT) has detected powerful gamma-ray flares (magenta lines) as well. (Image credit: NASA's Goddard Space Flight Center)​
​
Unlabeled version​ 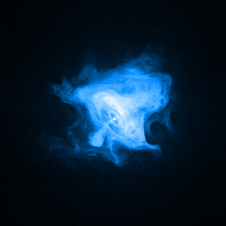 NASA's Chandra X-ray Observatory reveals the complex X-ray-emitting central region of the Crab Nebula. This image is 9.8 light-years across. Chandra observations were not compatible with the study of the nebula's X-ray variations. Credit: NASA/CXC/SAO/F. Seward et al.​