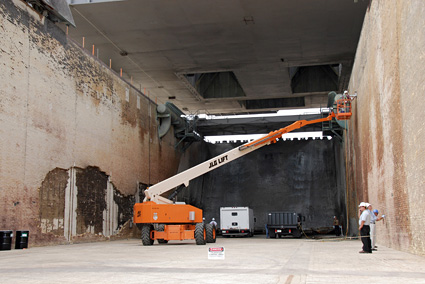 Image above: A view of the flame trench on Launch Pad 39A at NASA's Kennedy Space Center where damage occurred during the May 31 launch of space shuttle Discovery. Photo credit: NASA/Kim Shiflett
View Hi-Res Image

During Discovery's May 31 liftoff, the east wall of the pad's north flame trench suffered damage, with broken sections of the wall scattered from the flame trench to the pad perimeter fence.

The pad is expected to be repaired by October, when the crew of STS-125 is targeted to launch aboard space shuttle Atlantis on a mission to service the Hubble Space Telescope.

Commander Mark Kelly and Pilot Ken Ham were at the controls of Discovery on June 14 as it glided through the sky over Kennedy Space Center to touch down on time at 11:15 a.m. EDT.

The astronauts were treated to a welcoming ceremony upon their return to Houston. 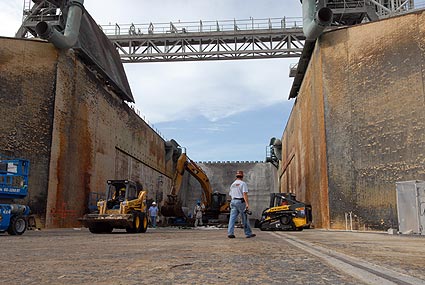 July 7, 2008
Workers at NASA's Kennedy Space Center in Florida are removing bricks from the damaged wall of the flame trench at Launch Pad 39A. The repairs remain on schedule and are not expected to hamper the launch of STS-125 on a mission to service the Hubble Space Telescope. The brick removal and related work is to be completed next week. Launch is targeted for Oct. 8.

The seven astronauts who will fly space shuttle Atlantis to the orbiting observatory will visit Kennedy later this week to check out the tools they will use during the flight. The visit is known as a crew equipment interface test and it gives the astronauts a chance to get familiar with the items they will employ in space.

The Hubble mission is commanded by Scott Altman, who also led the most recent Hubble servicing flight, STS-109. The crew will install new equipment on the space telescope that will enable the observatory to continue its landmark work for another five years.

Also at Kennedy, preparation of Atlantis continues on pace. Space shuttle Endeavour is also on schedule for launch in the unlikely event of an emergency with Atlantis during the Hubble mission. Workers will begin stacking the solid rocket boosters for Endeavour on Thursday. Endeavour will launch to the International Space Station during STS-126, targeted for launch on Nov. 10.

Earlier today the External Tank to be used on STS-125 left the Michoud Assembly Facility. It should roll on to the transport barge "Pegasus" later today. Anticipated arrival of ET-127 at KSC is July 16.

can I have a picture of one of them barges ? I have never seen one

Thanks that's quite big

woo482 said:
can I have a picture of one of them barges ? I have never seen one
Click to expand...

Here you go: http://www-pao.ksc.nasa.gov/kscpao/images/large/05pd0052.jpg
External Tank is ET-120 being offloaded at KSC and transported to the VAB.


CAPE CANAVERAL, Fla. - The first major flight hardware for the fifth and final space shuttle servicing mission to NASA's Hubble Space Telescope is starting to arrive at the Kennedy Space Center, Fla., to begin preparations for its targeted October launch.

Three carriers, which are pallets that will hold equipment in space shuttle Atlantis' payload bay, were delivered to Kennedy Wednesday. They will be prepared for the integration of telescope science instruments, both internal and external replacement components, as well as the flight support equipment to be used by the astronauts during Atlantis' mission, designated STS-125 and SM4.

The three payload carriers are the Flight Support System (FSS), the Super Lightweight Interchangeable Carrier (SLIC), and the Orbital Replacement Unit Carrier (ORUC). At the end of July, a fourth and final carrier, the Multi-Use Lightweight Equipment (MULE) carrier, will join the others in the Payload Hazardous Servicing Facility where the Hubble payload is being prepared for launch.

The Flight Support System will attach, secure and provide power to Hubble and also contains the Soft Capture Mechanism that will assist in the de-orbiting of the telescope when its science mission is over. Among the components to be integrated onto the carriers are the Wide Field Camera 3 that will be placed on the SLIC with Hubble's two new battery modules. The Fine Guidance Sensor and the Cosmic Origins Spectrograph will be on the ORUC, as well as the replacement gyros. The Relative Navigation Sensors and the New Outer Blanket Layers will be on the MULE. These components, which will be integrated onto the carriers, will be delivered to Kennedy during the first half of August.

Numerous crew aids and tools that the astronauts will use during their five planned spacewalks also will be integrated onto the carriers. The new hardware will ensure Hubble is at the apex of its scientific capability and that it functions efficiently for a minimum of five more years.

The processing and integration of the Hubble flight hardware will take approximately two months. The payload is scheduled to go to Launch Pad 39A in mid-September to be installed into Atlantis' payload bay.

For more information about the Hubble Space Telescope and its research, visit:

For more information about the STS-125 mission and its crew, visit: 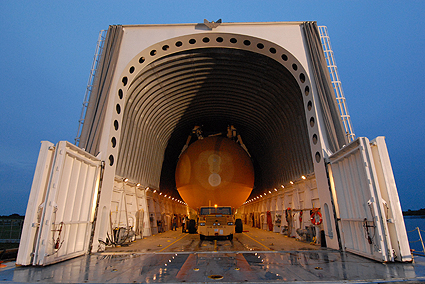 July 16, 2008
The orange external fuel tank, designated ET-127, has been towed to the Vehicle Assembly Building at NASA's Kennedy Space Center in Florida. Stacking of the tank with the solid rocket boosters is scheduled for early August.

The payload carriers will be prepared for the integration of telescope science instruments, as well as the flight support equipment astronauts will use during the servicing mission.

At NASA's Johnson Space Center in Houston, STS-125 crew members are in the Neutral Buoyancy Lab practicing techniques that will be used to replace the Fine Guidance Sensor 2 and repair the Advanced Camera for Surveys.

The STS-125 mission to service NASA's Hubble Space Telescope will update and enhance its abilities to transmit dynamic images and amazing discoveries to Earth for several more years.

A view inside the PHSF where the HST payloads are being processed.

Progress can be viewed at the link listed above. 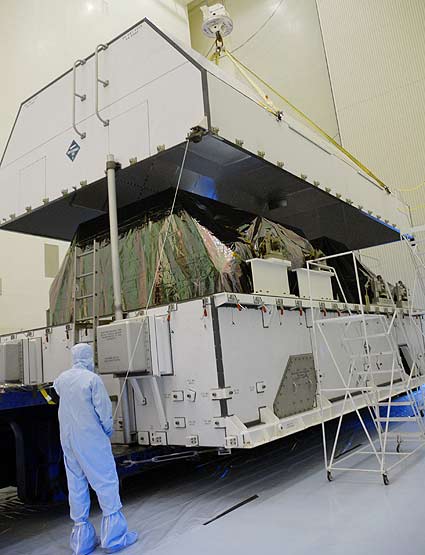 Three of NASA's Hubble Space Telescope's science instruments were delivered to Kennedy's Payload Hazardous Servicing Facility and are now undergoing a highly sensitive cleaning process to prepare the equipment for flight. The fourth and final component will be delivered at the end of July.

Repair of Launch Pad 39A's flame trench is right on schedule. All materials needed for the refurbishment have arrived and fireproofing will begin Monday with the application of Fondu Fyre, a heat resistant concrete developed during the Apollo space program.

The STS-125 flight is the final shuttle mission to the Hubble Space Telescope. NASA astronauts will install new instruments, gyros, batteries and other components crucial to the telescope’s continued success through the year 2013.

Training and Testing on Tap 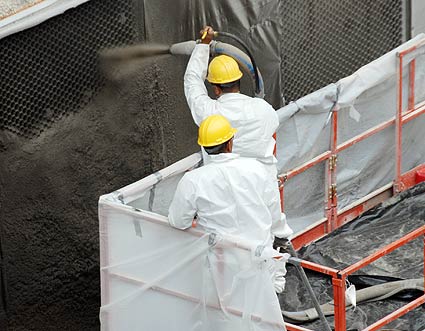 The Hubble Space Telescope's Fine Guidance Sensor and final payload carrier called the Multi-Use Lightweight Equipment carrier, or MULE, are scheduled for delivery Monday and Tuesday respectively, to Kennedy's Payload Hazardous Servicing Facility where they will be processed for flight.

Out on Launch Pad 39A, repairs to the flame trench are close to completion. Workers are touching up the last of the heat-resistant material called Fondu Fyre on the walls. The trench repair work is expected to end Wednesday.

Space shuttle Endeavour's STS-126 mission crew members are wrapping up a few days of training at Kennedy. The astronauts are performing their crew equipment interface test, which gives them an opportunity to handle and inspect the flight hardware they'll be using on their mission to the International Space Station. Launch for STS-126 is targeted for Nov. 10.

The STS-125 crew members close out their week at NASA's Johnson Space Center in Houston by debriefing three days of simulated training for the Hubble servicing mission.

During the STS-125 mission, NASA astronauts will install new instruments on the telescope, including the Cosmic Origins Spectrograph and the Wide Field Camera 3. A refurbished Fine Guidance Sensor will replace one unit of three now on board.

Crew members will also install new gyroscopes, batteries and thermal blankets on the telescope enhancing the abilities of Hubble for several more years of service. Launch is targeted for Oct. 8.
C

I think the mission patch is the best so far of any shuttle mission.
H

I´m agree.
is the most interesting mission of the space shuttle and a huge challenge.

i hope that they don´t need the backup shuttle for a rescue mission.

Kinda obvious why the Flame Trench failed, Its stood up to Saturn V's, Saturn IB's, and like 70 Some odd Shuttle missions in a 40 year time frame, Shoot I would have expected LC-39A to have this happen in the Early 80s.

Kyle said:
Kinda obvious why the Flame Trench failed, Its stood up to Saturn V's, Saturn IB's, and like 70 Some odd Shuttle missions in a 40 year time frame, Shoot I would have expected LC-39A to have this happen in the Early 80s.
Click to expand...

The Shuttle missions would have had by far the worst effect due to the hydrochloric acid in the SRB exhaust. Nasty stuff for the metal brick ties that hold the fire bricks to the pad structure. The seaside environment would not be too friendly to these either. 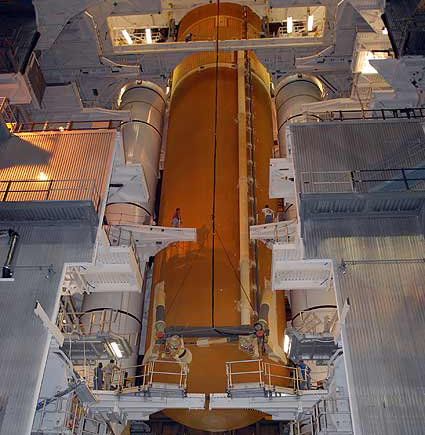 Image above: In the Vehicle Assembly Building at NASA's Kennedy Space Center, the external tank is lowered between the solid rocket boosters for joining on the mobile launcher platform. Photo credit: NASA/Jack Pfaller
› View Hi-res Image

August 5, 2008
NASA's Johnson Space Center in Houston closed Monday afternoon in preparation for the expected landfall of Tropical Storm Edouard. The astronauts for the STS-125 mission will resume their training schedule in a few days.

The closure will not interfere with mission preparations at other NASA centers, including Kennedy Space Center in Florida where the burnt-orange external tank was lowered into place Sunday between a pair of solid rocket boosters.

Crane operators and technicians at Kennedy bolted the tank to the booster rockets to complete a major milestone in the preparations to launch Atlantis in early October on a mission to upgrade the Hubble Space Telescope. Liftoff is targeted for Oct. 8.

Out at Launch Complex 39A, where Atlantis will begin its mission, workers continue the last steps necessary to repair damage to the flame trench from the STS-124 launch in May. A swath exposed material in the flame trench is being covered with a protective layer of fire-resistant concrete. The repairs are to be completed Wednesday.

A new fine guidance sensor for the Hubble was delivered to Kennedy yesterday. The sensor is crucial to the space-based observatory because it helps the instrument orient itself precisely.

A payload platform that will hold equipment for the mission in the payload bay is to arrive at Kennedy today. The Multi-Use Lightweight Equipment carrier is known in NASA as a MULE.

That would have been nice if it would be real: 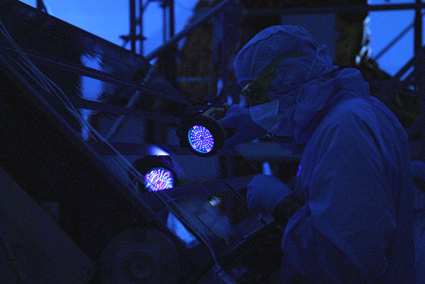 Image above: A worker uses a blacklight to closely inspect the surface of the Cosmic Origins Spectrograph that will be installed in the Hubble Space Telescope during the STS-125 mission. The instrument and other equipment are being prepared at NASA's Kennedy Space Center in Florida. Photo credit: NASA/Kim Shiflett
› View Hi-res Image

The shuttle is targeted to be joined to its external fuel tank and a pair of solid rocket boosters the week of Aug. 17. Launch is targeted for Oct. 5.

The shuttle was powered down leading to rollover to the VAB and workers closed the hatch for the last time before Atlantis is moved to the launch pad.

The astronauts of Atlantis’ STS-125 mission to upgrade NASA’s Hubble Space Telescope will be off this weekend. Next week, they'll practice spacewalking techniques in a large swimming pool at Johnson Space Center in Houston.

The external tank slated for space shuttle Endeavour’s STS-126 mission in November, is making its way by barge from NASA’s manufacturing plant in New Orleans to Kennedy. It is expected to arrive at Kennedy on Monday depending on travel conditions.
You must log in or register to reply here.
Share:
Facebook Twitter Reddit Pinterest Tumblr WhatsApp Email Link
Top