Total Launch and BOL mass for all HS-376 satellites (including those launched from other rockets):
https://space.skyrocket.de/doc_sat/hs-376.htm
Note that only the original configuration of the HS-376 has flown aboard a Shuttle

Unfortunately, there are no specific fuel mass indicated in both links

And working on exterior of Spacelab

Gargantua2024 said:
Total Launch and BOL mass for all HS-376 satellites (including those launched from other rockets):
https://space.skyrocket.de/doc_sat/hs-376.htm
Note that only the original configuration of the HS-376 has flown aboard a Shuttle

Unfortunately, there are no specific fuel mass indicated in both links
Click to expand...

I assume BOL (Beginning of life) no more fuel? Intelsat6 has 2 490KN thrusters and 6 22N rcs this is what we may use:

gattispilot said:
Yes not sure what you mean here"Note that only the original configuration of the HS-376 has flown aboard a Shuttle"
Click to expand...

What I meant is the list of satellites starting from Anik A1 up to ZX-7 (ChinaSat 7), which comprises the first-generation of HS-376 satellites

The other generations on the list (HP, L, W) never flew on the Space Shuttle

So it seems there are basically 2 meshes for the HS 376 sat in STS Payloads. It is the same mesh but different textures. 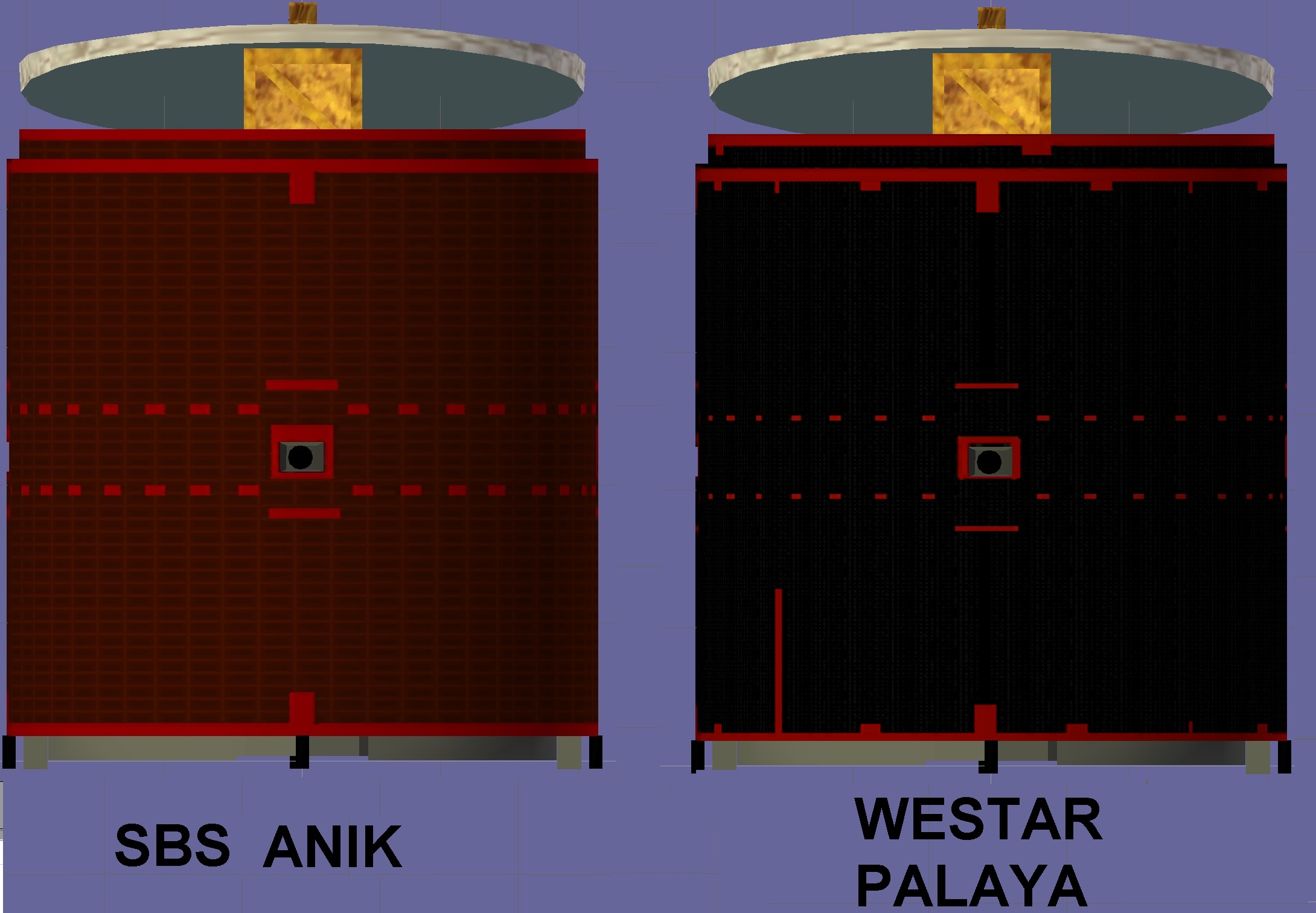 gattispilot said:
So it seems there are basically 2 meshes for the HS 376 sat in STS Payloads. It is the same mesh but different textures.
Click to expand...

There are actually six meshes for the HS-376 in STS-Payloads, but yeah they all look alike (with the exception of the Aussat mesh)

Thanks. since the main body are the same. I can redo those. I guess if all HS-376 why different textures?

Looking at the sbs from sts 41D it looks to be the darker textures like the Westar. 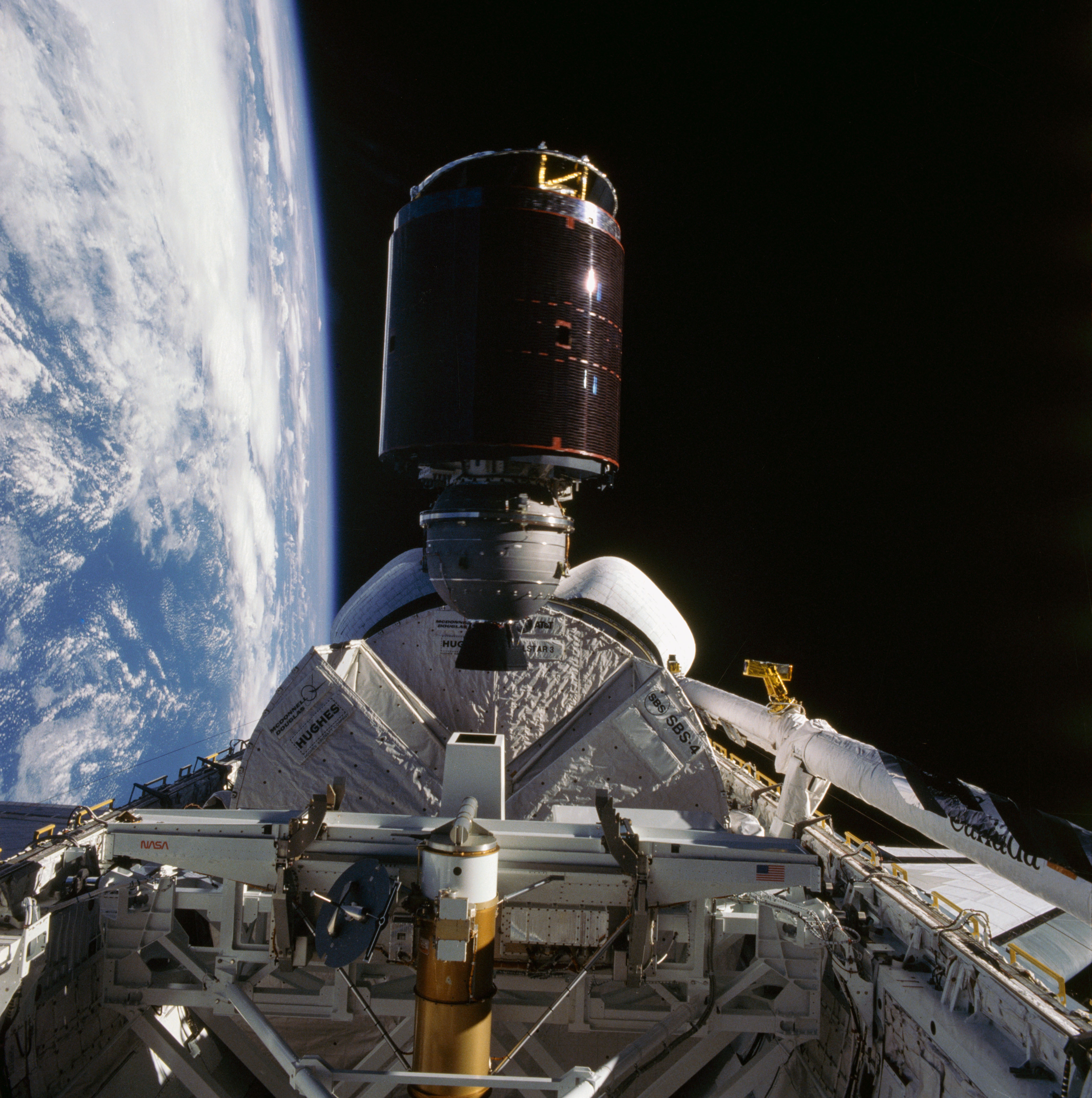 This is SBS3 from sts 5. It looks to be like the westar darker texture?

The photos seems that the HS-376 solar panels are dark in space, while red before launch

Gargantua2024 said:
The photos seems that the HS-376 solar panels are dark in space, while red before launch
Click to expand...

I am not sure we have photos of the Satellites separated from the PAM. So it looks like at least for this SBS it is dark panels with red trim. The Intelsat is dark with yellow trim. I will look at other images and see

This site might help:
http://spacefacts.de/english/flights.htm
A great number of photos from every manned spaceflight are available there, including shuttle flights 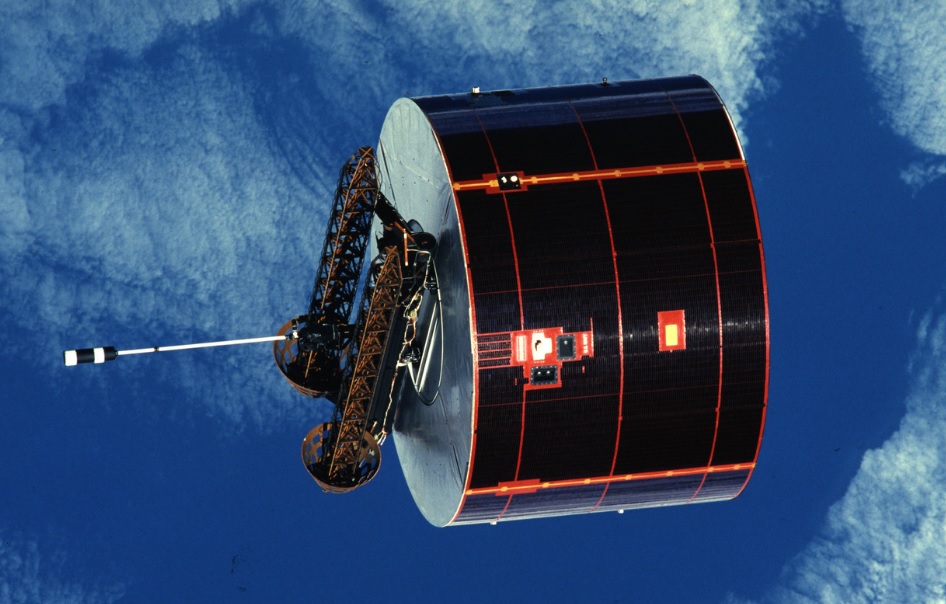 Westar 51A looks dark with red: 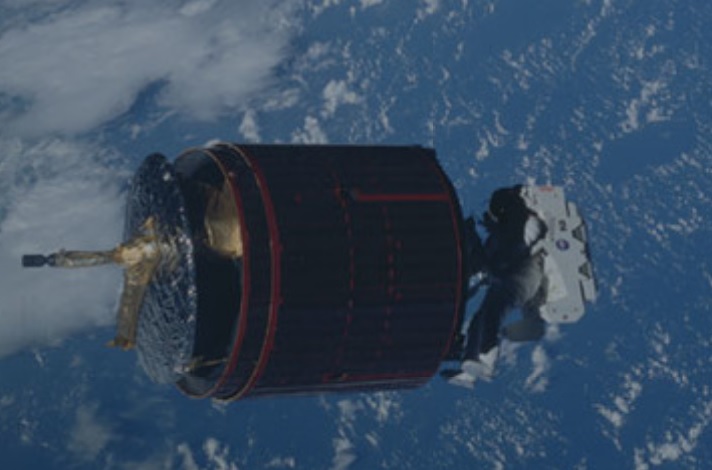 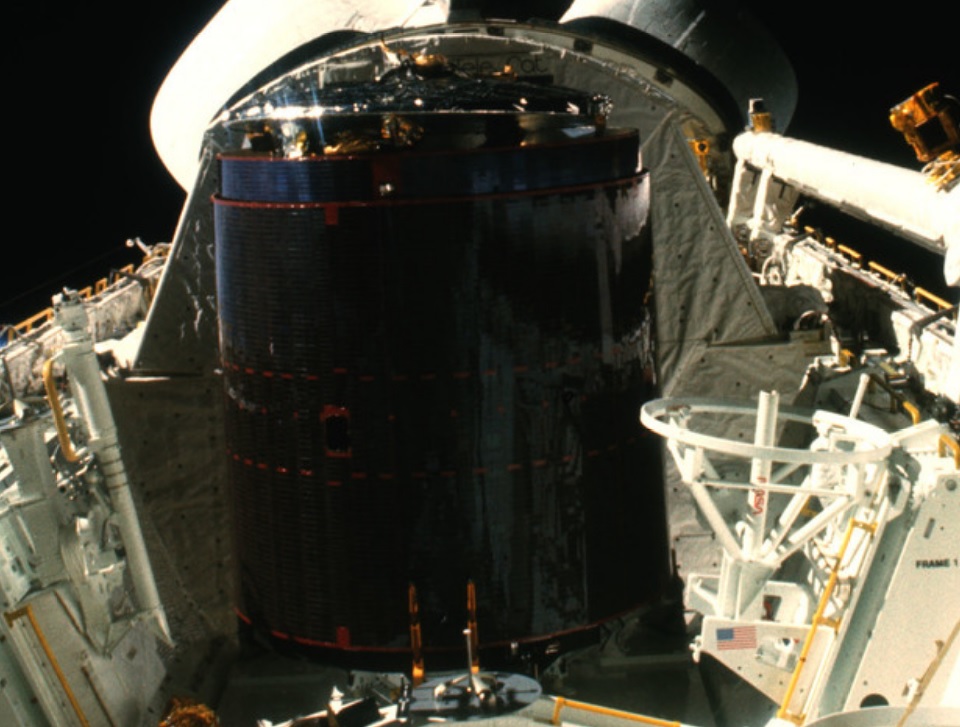 So here are both sbs and anik. Maybe there are a brighter color with red trim? 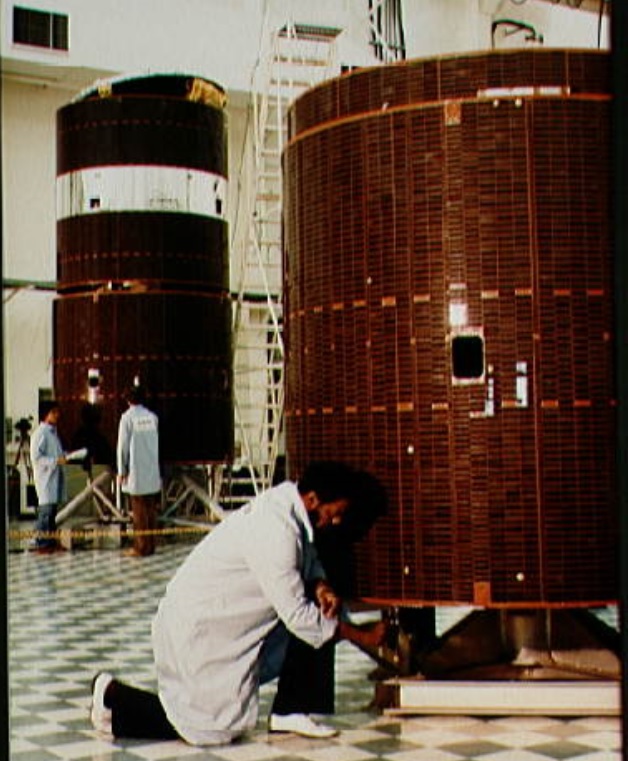 Redoing the ASE for sts 5. and others. little details like no logos on the ase doors. And cable running to the ASE,....

I might have the rear ase too close. Between the rails fit a bridge rail adapter and a keel adapter. It looks like the Y position (Z orbiter) on the Keel adapter can change. Not sure if the post on the bottom of the ase goes forward or aft. The ASEs will have a structure inside. 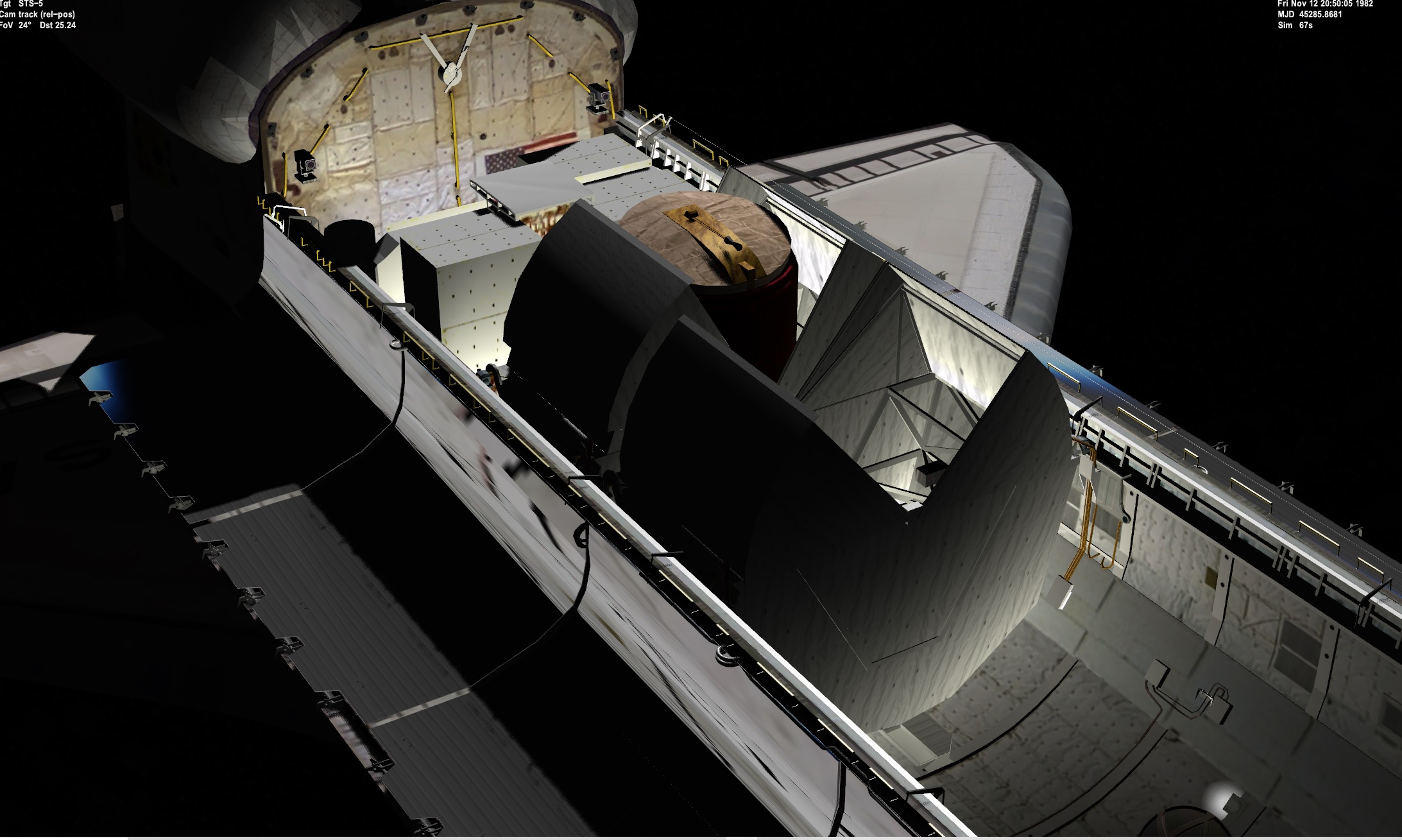 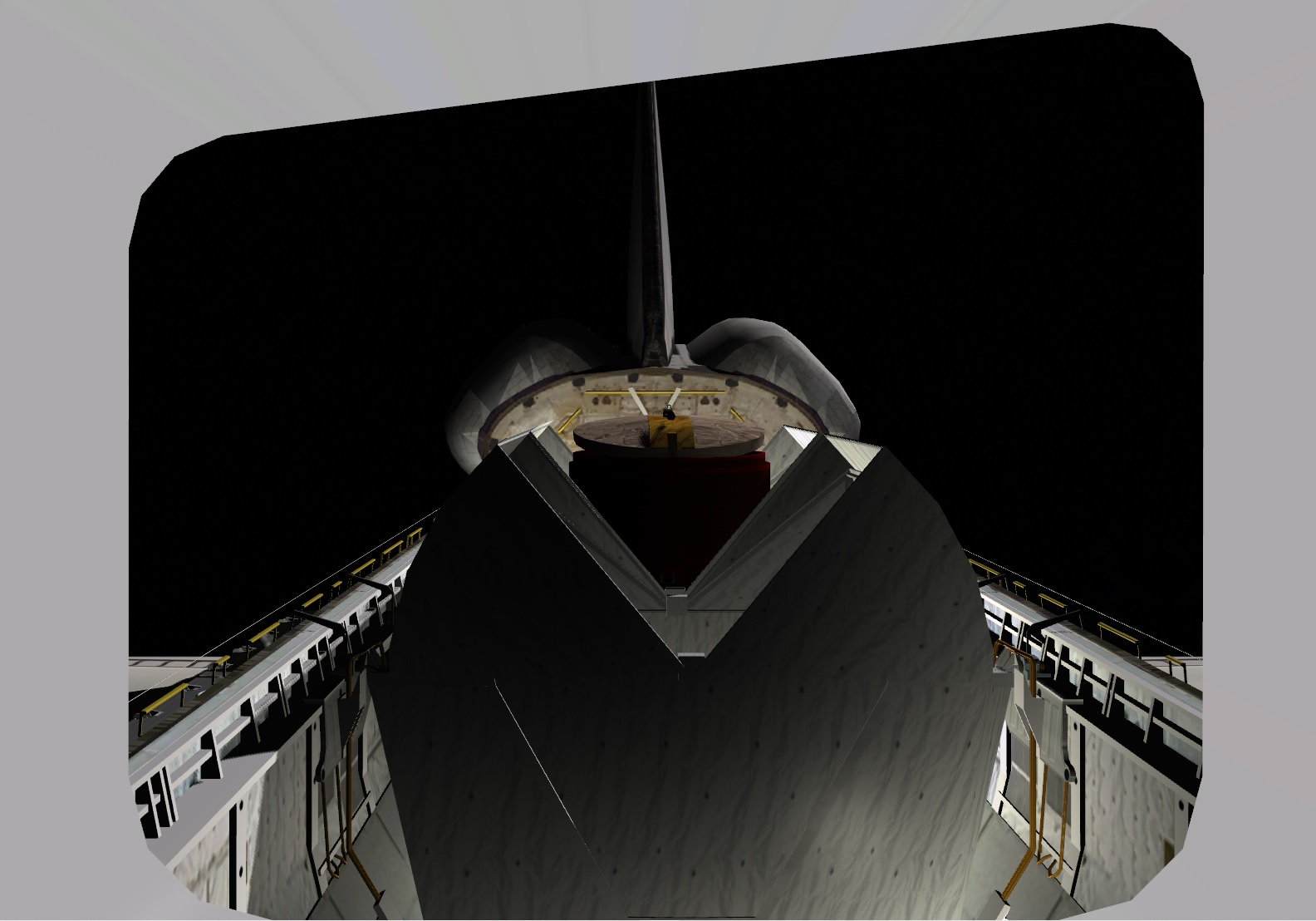 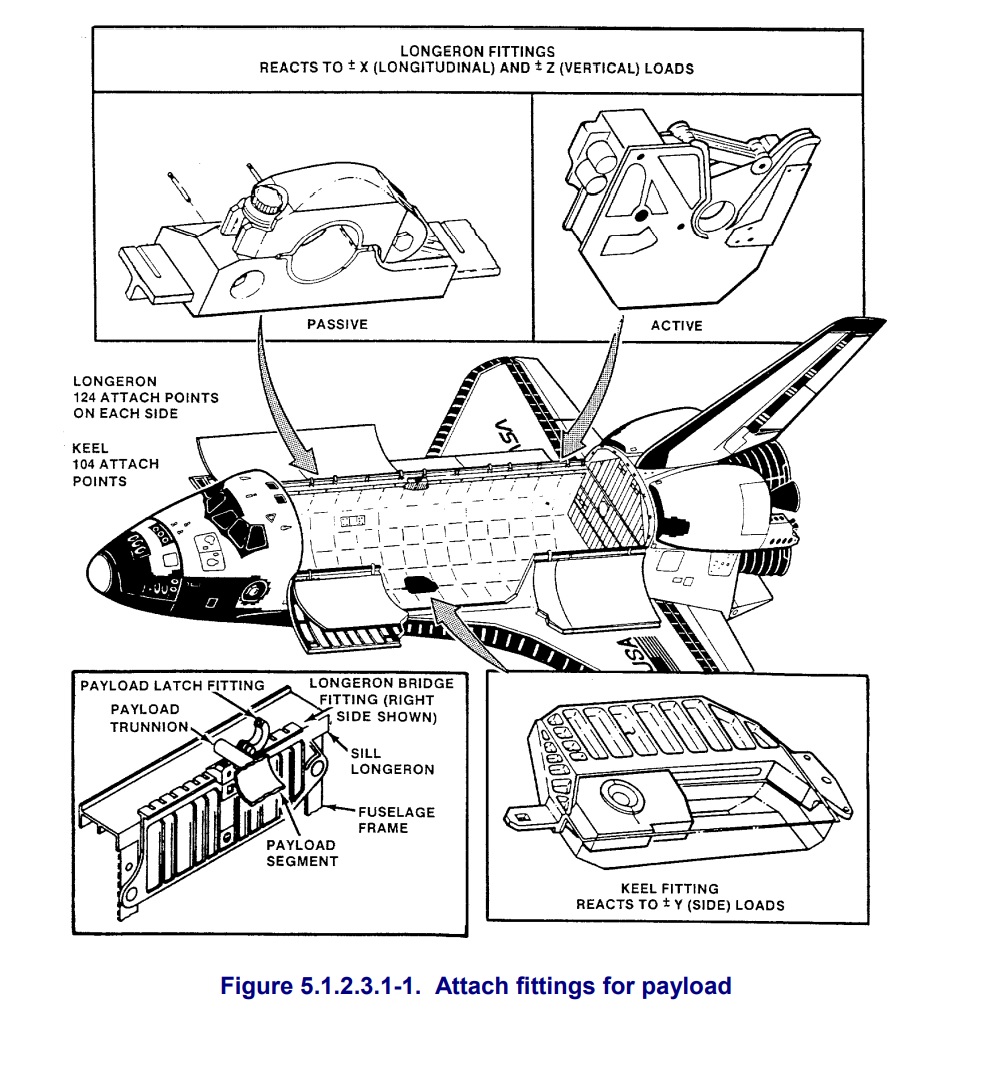 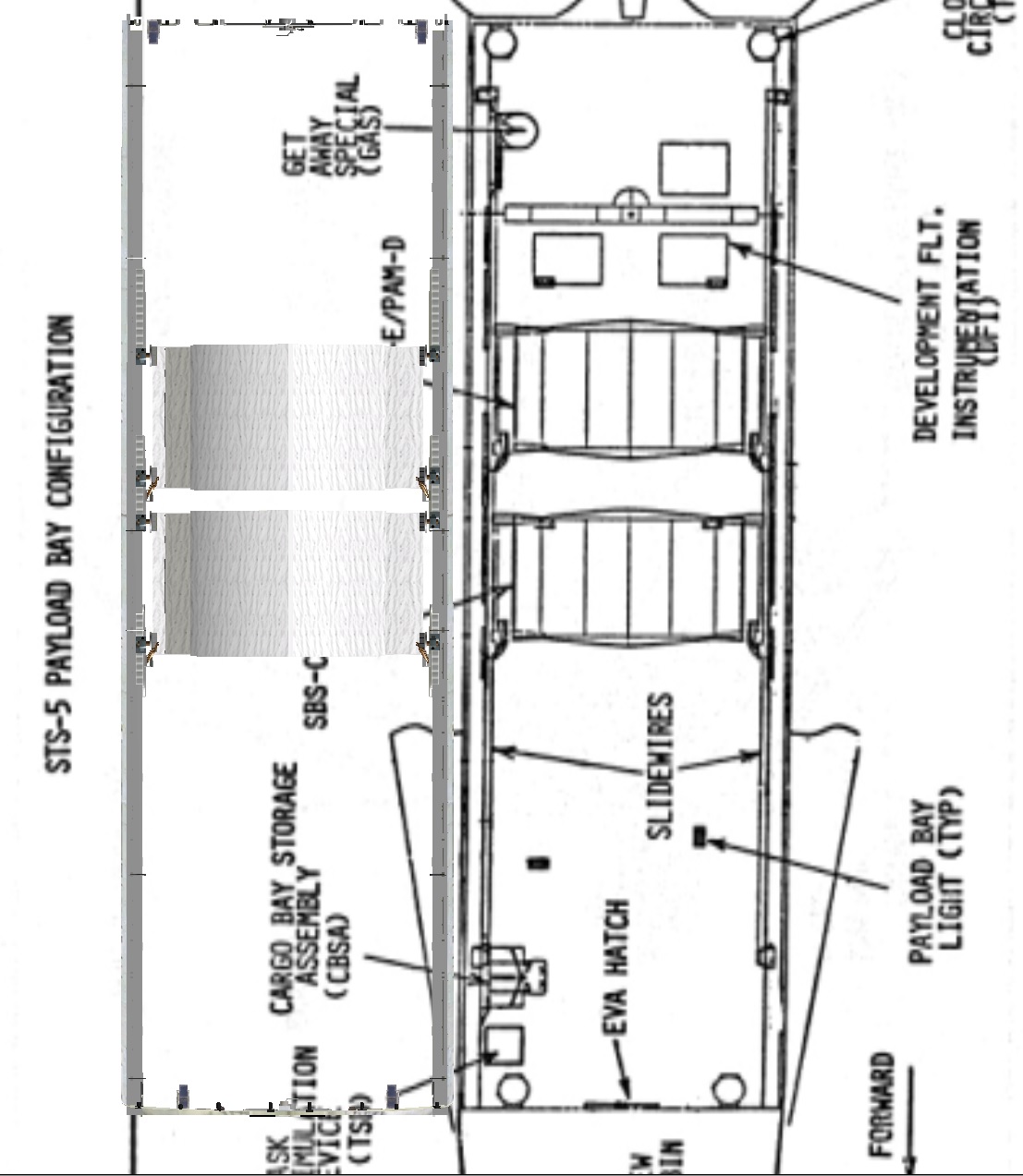 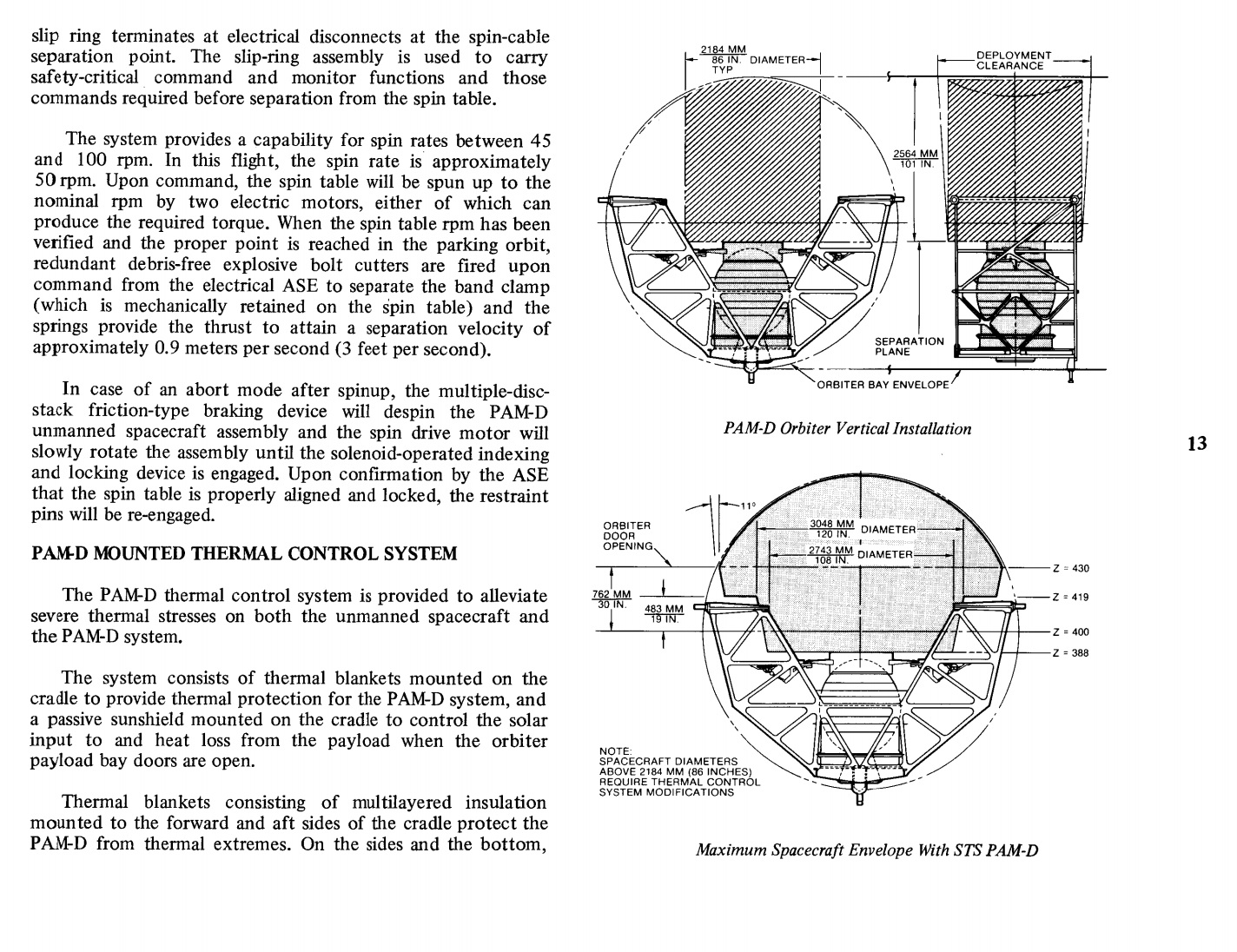 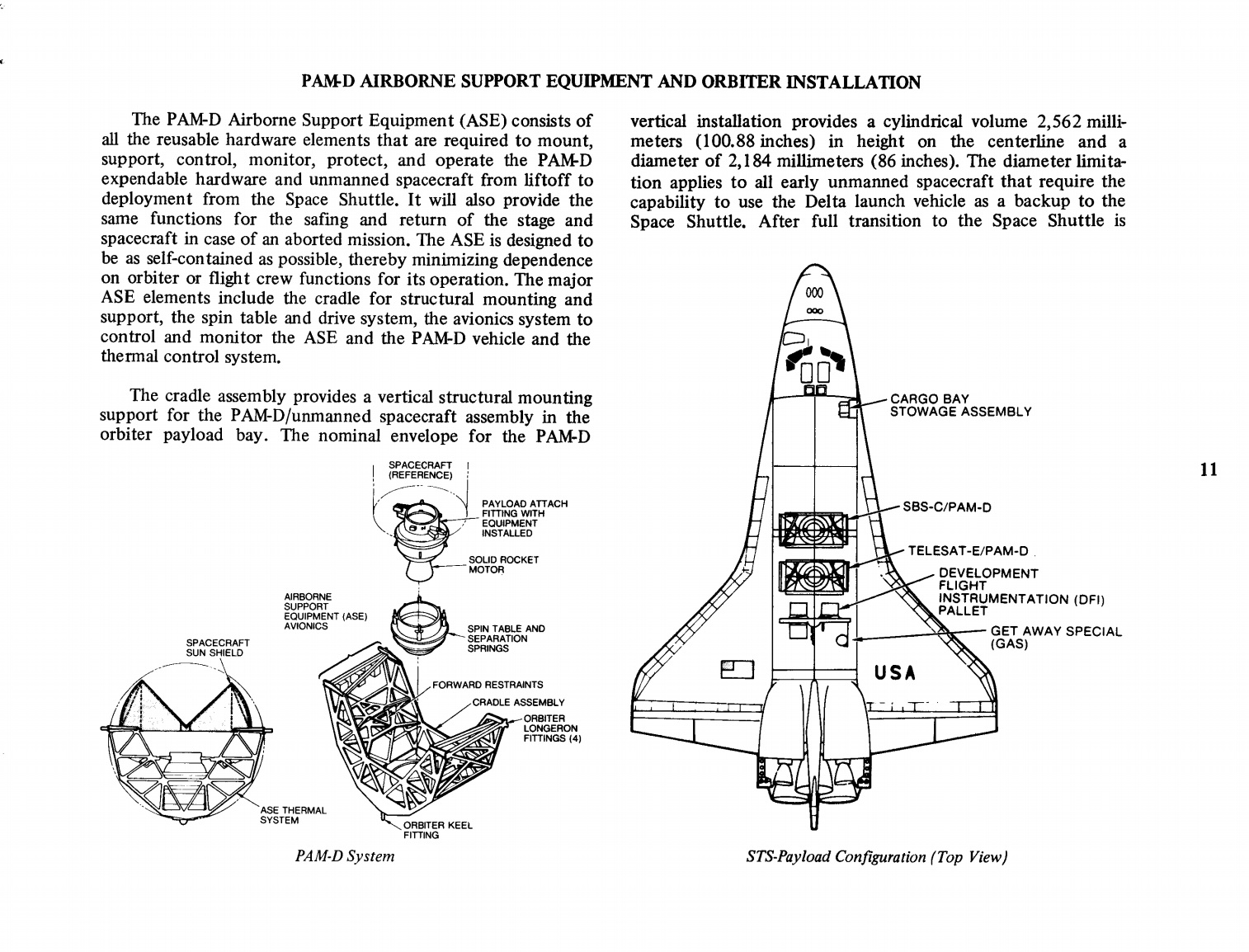 Does any one have detailed drawing of the ASEs?
Looking at this. The bottom seems to be more shorter in length. But then the doors need to be longer in width to allow the satellite not to hit. 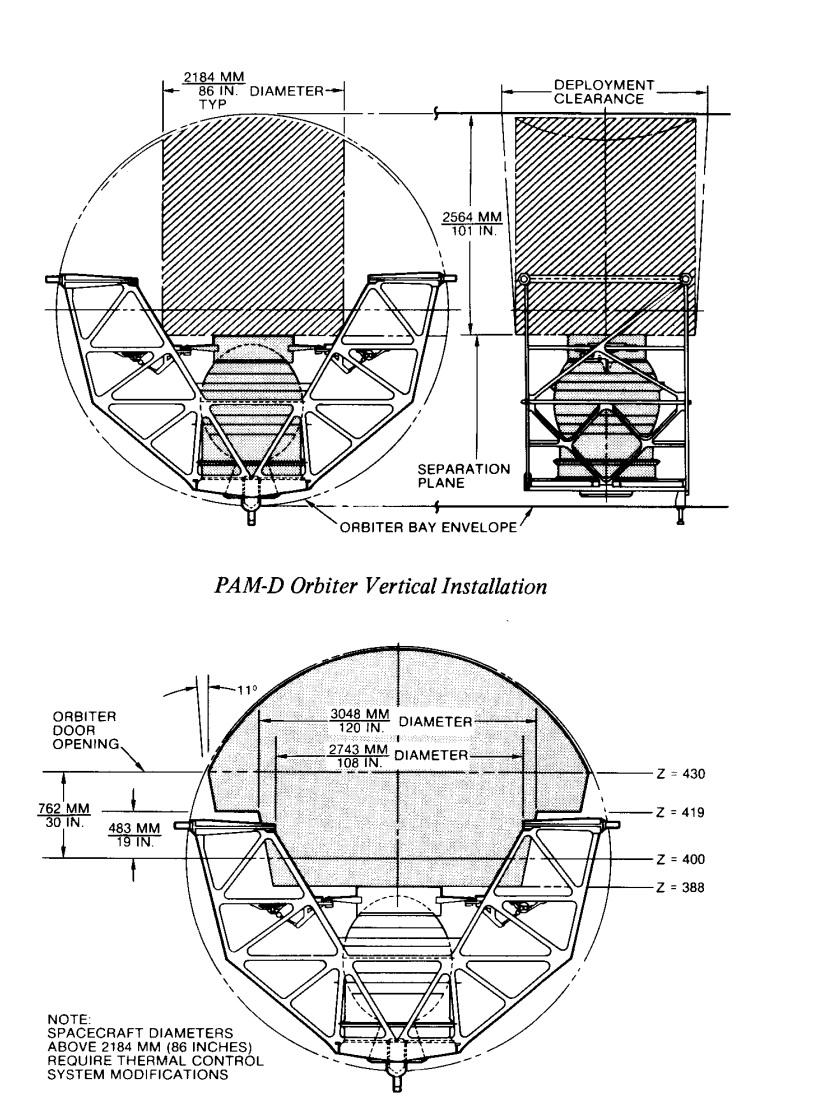 And the Orbital bay envelope is the edge of the frames? It seems the top of the doors are longer also. 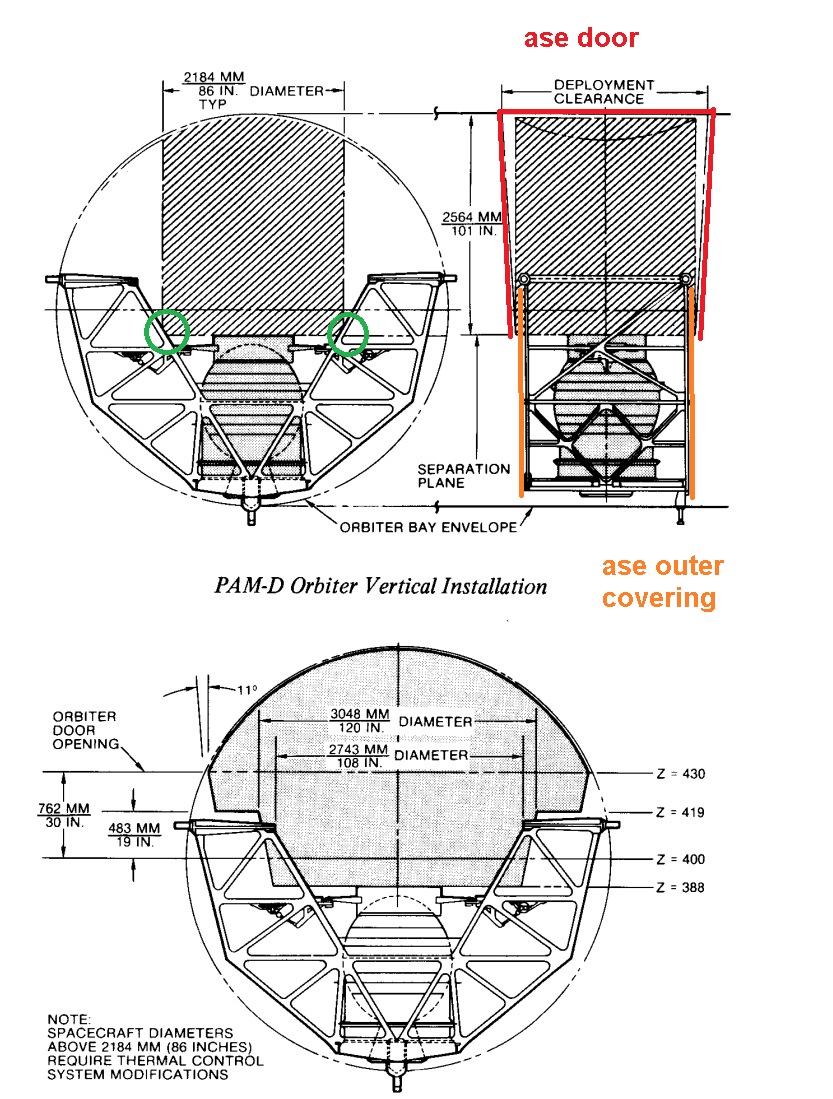 the orange would be the bottom of the case and the red doors. Seems like the satellite would hit at the green areas?
Last edited: Jan 28, 2021

Now on the Hangar:

Thanks to Paddy, Bruno and others who cleaned the zip and scenarios

Ok I think this is what the ASE look like. So the outer edge would cover the frame work. But it looks like the center is extended to allow the satellite to be there. in the images that is red. The doors are green and the upper part is blue. 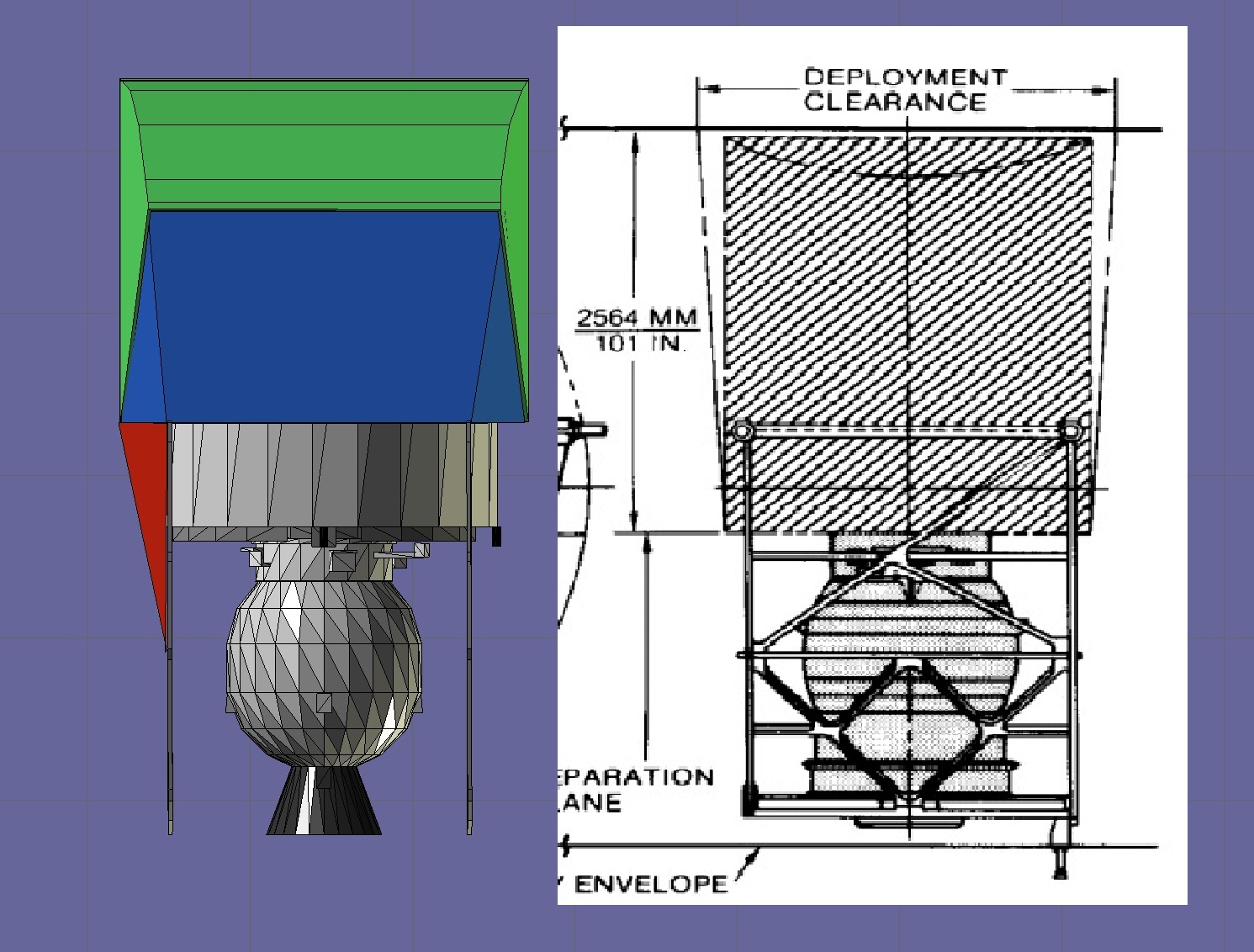 looking at images of the ase. I think the edge of the blue part are slanted not curved.

Found a mesh for a DSP satellite that might be useful in recreating STS-44 (Atlantis):
https://celestia.space/forum/viewtopic.php?p=139286#p139286 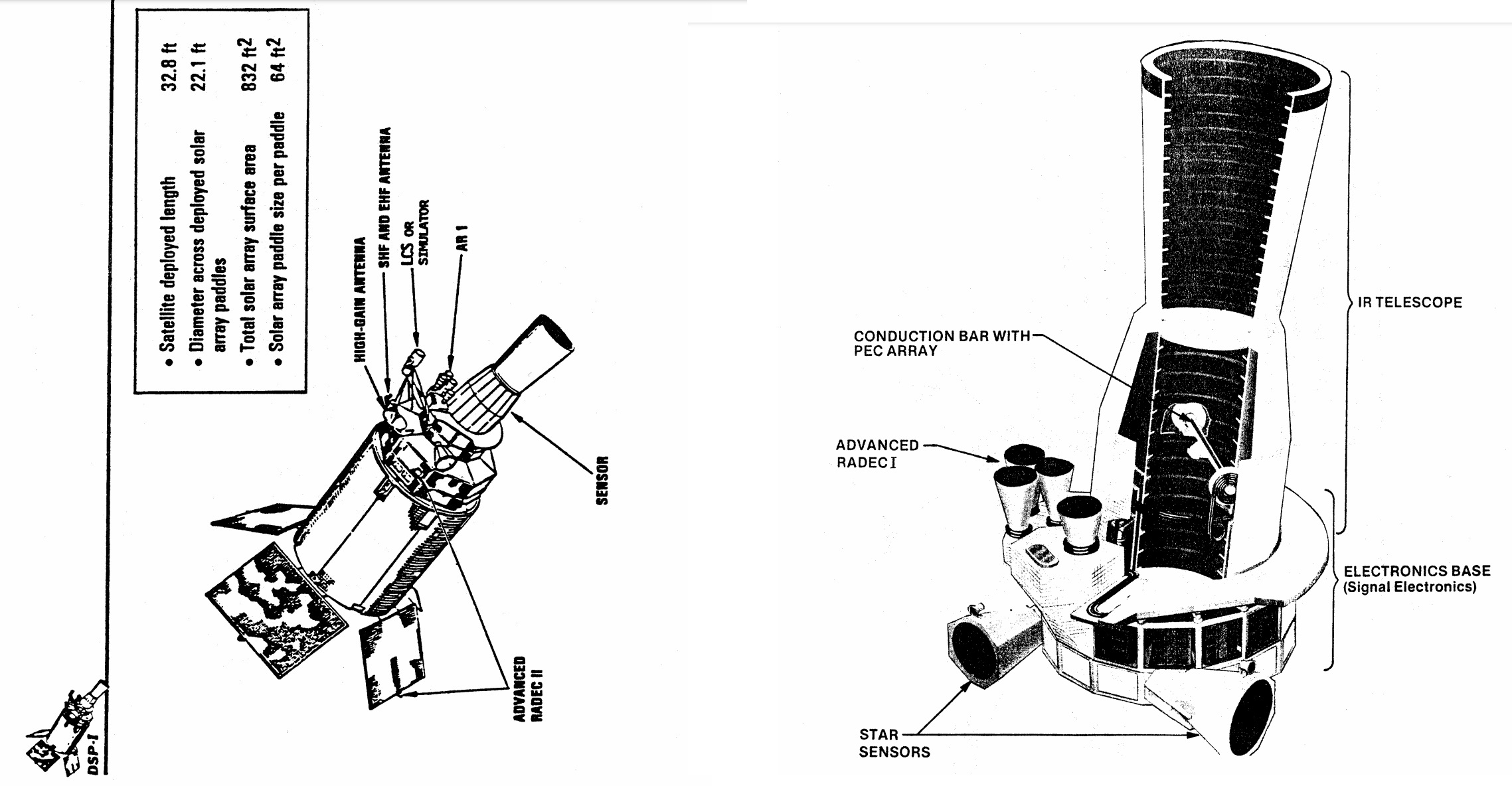 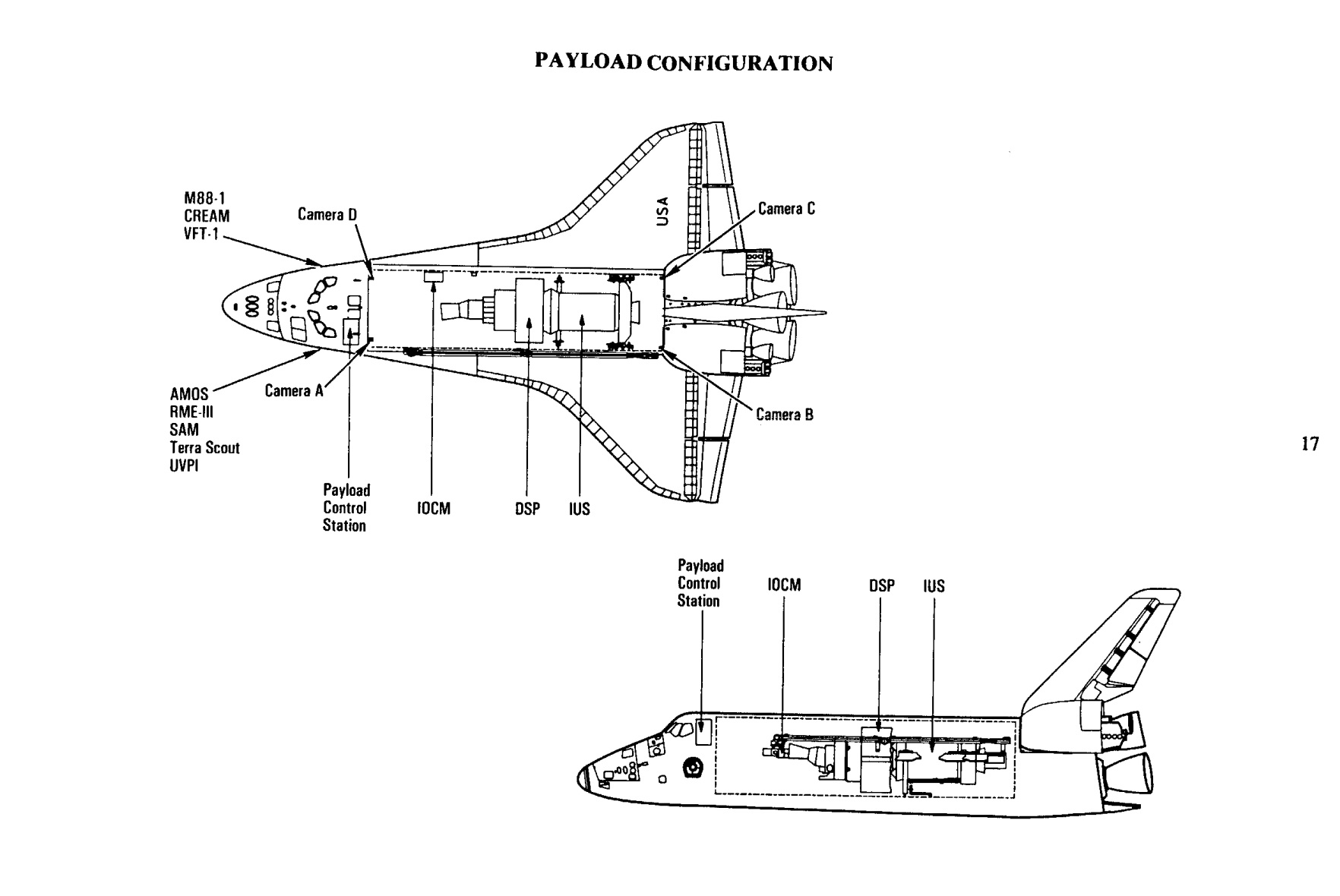 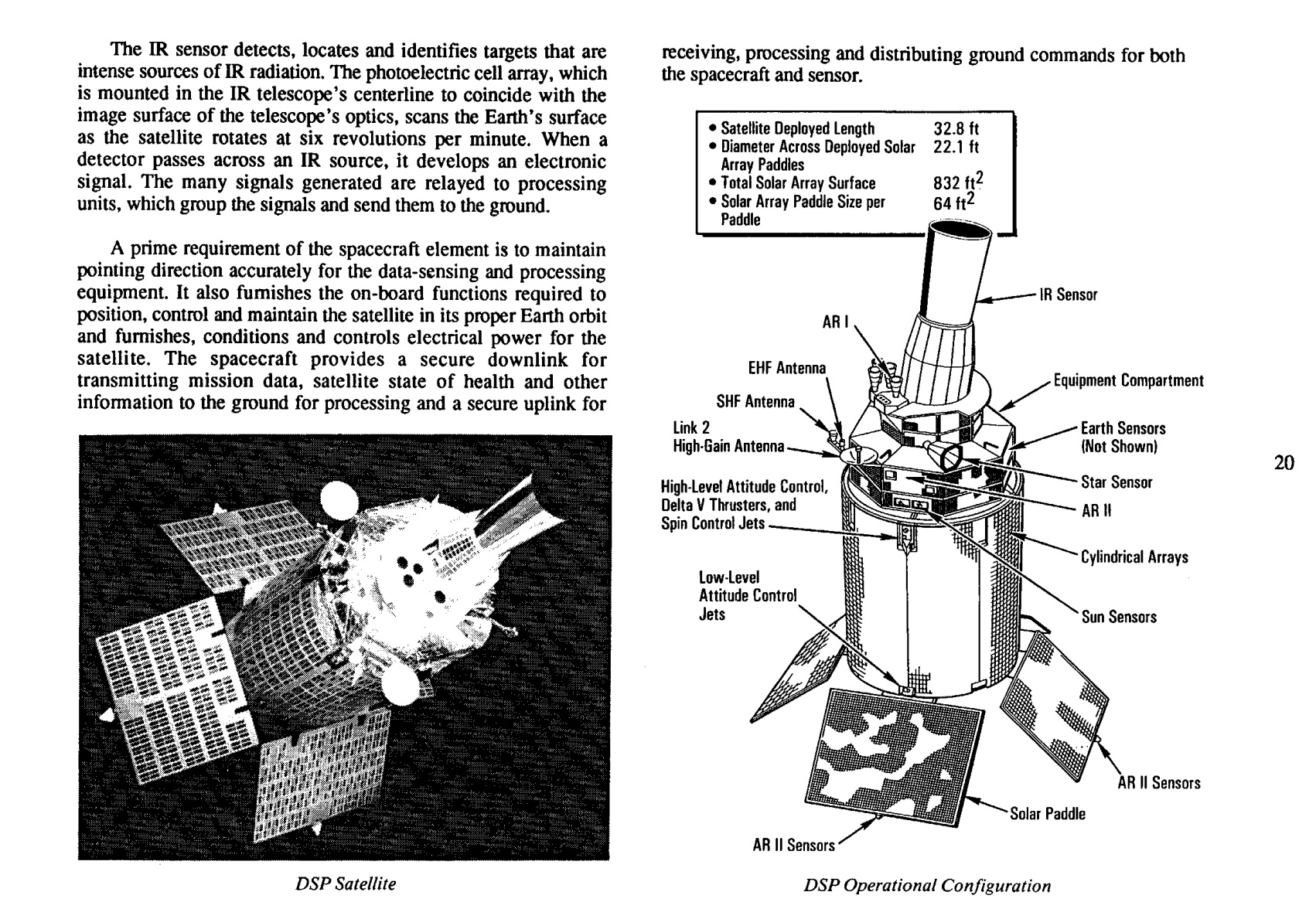 I think I finally got the ase to where they should be: 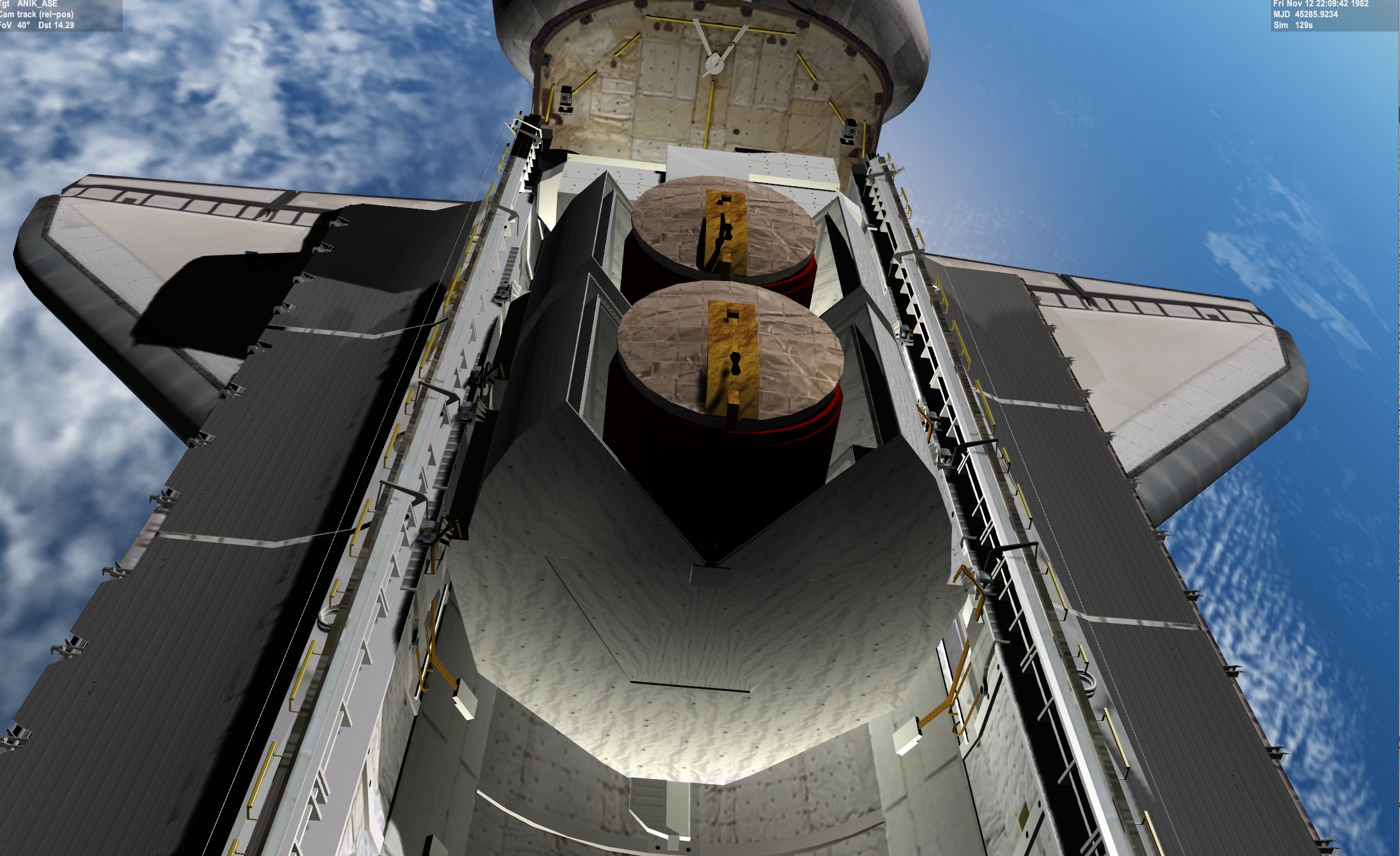 I think the exterior of the spacelab might be done also. this is for sts 9. It seem the exterior changed slightly mainly the front round labels depending on the mission.
The interior would change also. 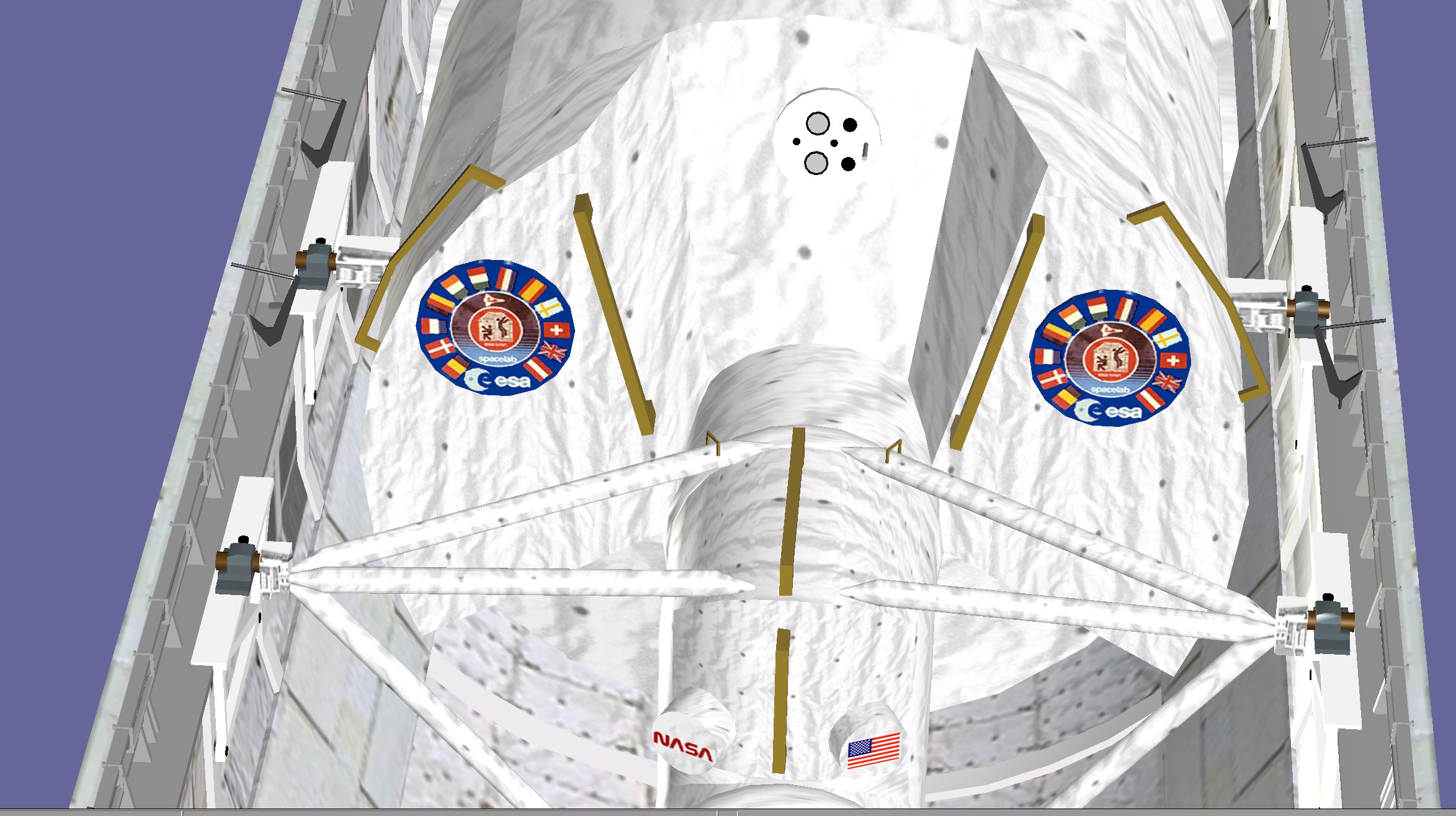 Any issues with the down load. I may need to remove the goggle drive links as my limit is getting close to the maximum.

Downloaded from OHM the other day....no issues with the download so far. It is quite mind-boggling that it reached over a gigabyte in size, but it doesn't matter cause it's worth it

For future updates, I'd recommend it to be uploaded in parts, (one for the whole shuttle stack, and the other for payloads), so that posting it on OHM would not be a time-consuming task
Last edited: Feb 1, 2021

I redid sts7. And issues. 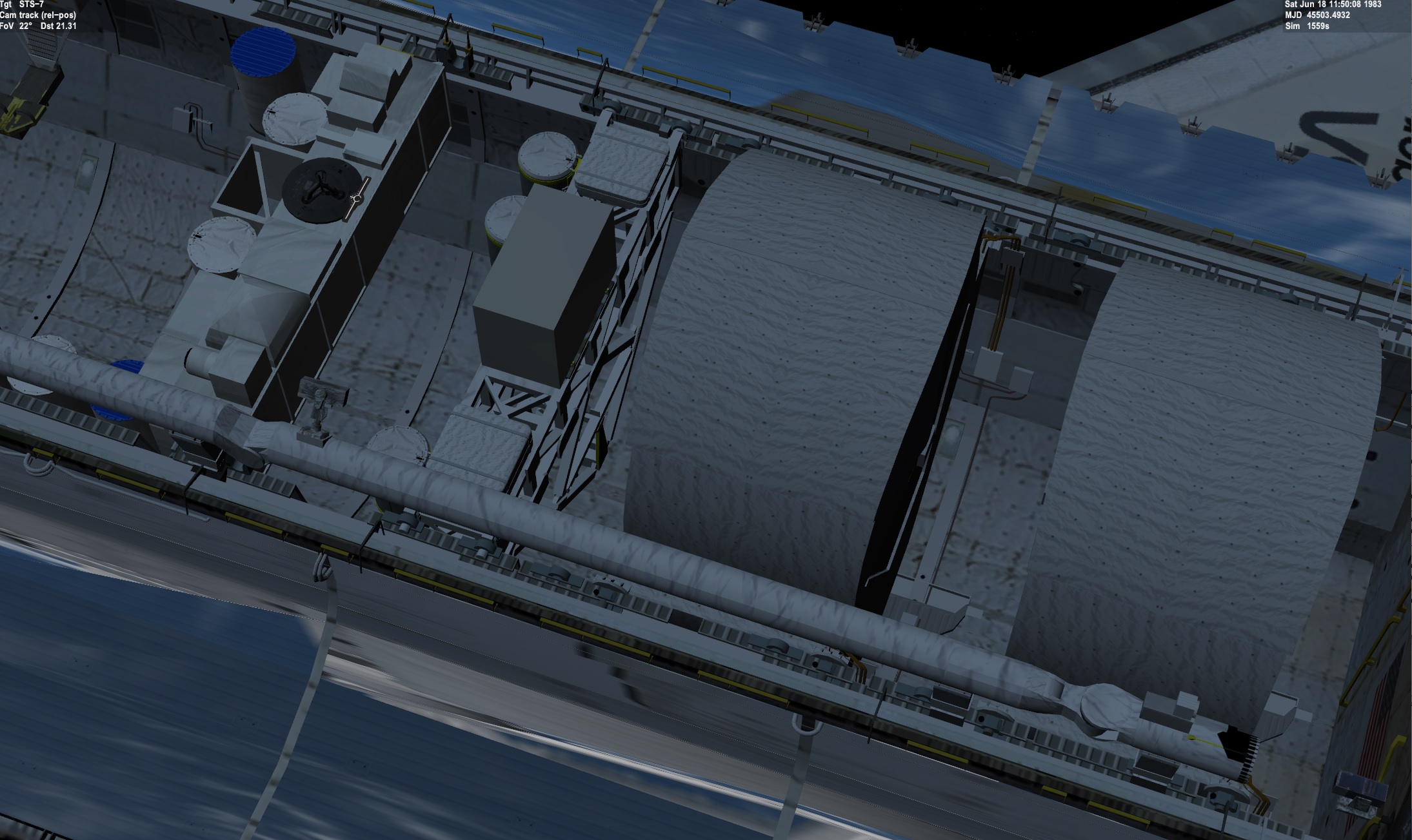 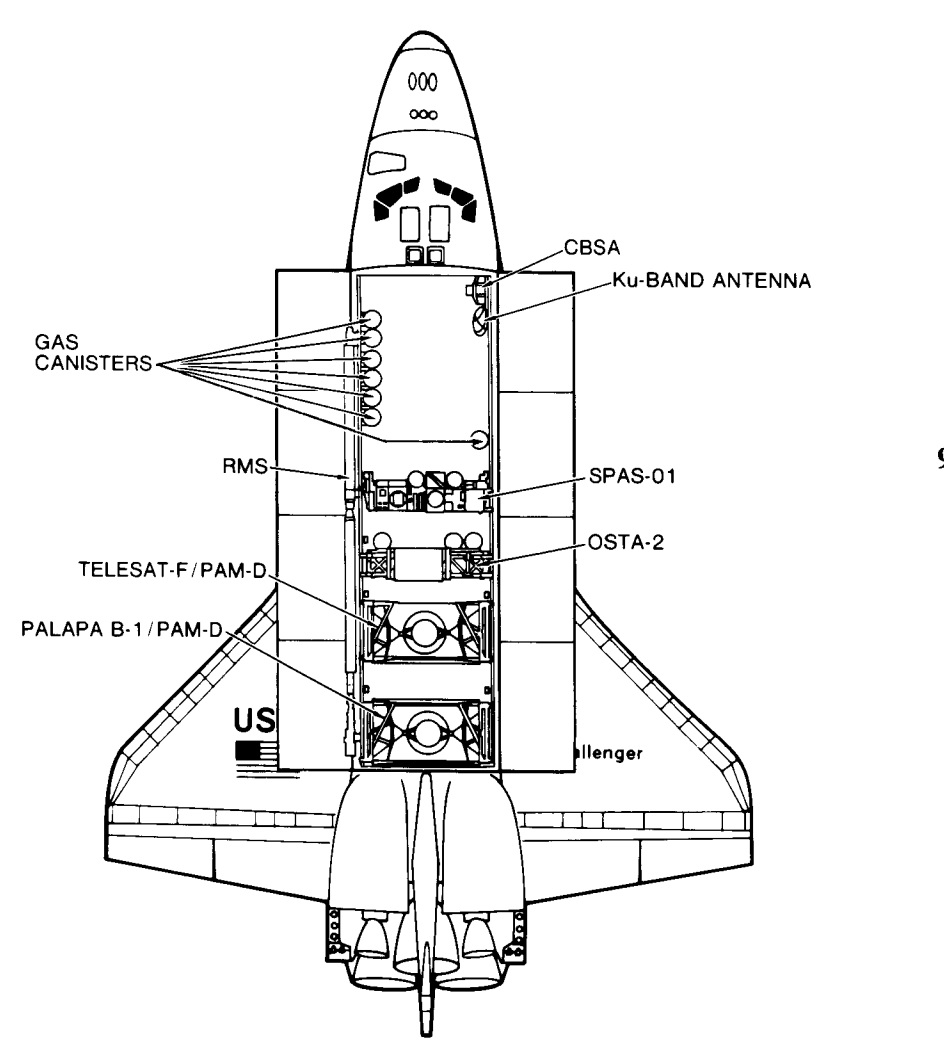 BUT I maybe see a issue with the shuttle meshes.

was there a half rail at the aft ? Else what would the ase attach too? I can add that in but that means a redo on all shuttle meshes. or the easy fix is just add the rail to the ase mesh.

I have a half rail at the front: