Plush monkey will become a talisman for the new expedition of the International Space Station. The monkey will also indicate weightlessness in the Soyuz TMA-01M vehicle during the launch sequence, Soyuz commander Alexander Kaleri told news media during the pre-flight conference at GCTC.
Speaking about the mission, Kaleri said that the crew is to make 3 EVAs and to carry out a variety of scientific experiments, including unique Plasma Crystal he personally likes best.
Soyuz TMA-01M is due to fly from Baikonur on Oct. 8, RIA Novosti informs.
Last edited by a moderator: Oct 5, 2010

Soyuz TMA-01M launch campaign continues at Baikonur. The vehicle with three crew members onboard is scheduled to fly to the International Space Station on Oct. 8.
TSENKI’s subsidiary- Yuzhny Space Center carries out prelaunch processing at pad 1 of the space port- Gagarin’s launch pad.
In parallel, the equipment of filling station 31 is being prepared for further prop tanking into the Soyuz propulsion system.
Baikonur’s pad 1 - the site used to launch Soyuzes – is the most famous launch pad in the world. R-7 blasted off from here on Oct. 4 to loft the first satellite, and Yury Gagarin also started his world-first space mission from pad 1, opening the ear of human space exploration.
The facility was built in 1955 – 1957. More than 100 human space vehicles, first Moon, Mars, Venus stations flew from pad 1.
This launch pad is used intensively until now. Up to 10 rockets of Soyuz-U and Soyuz-FG type are launched from this facility to orbit Soyuz-TMA crew and Progress cargo vehicles to the International Space Station.
Last edited by a moderator: Oct 5, 2010

New onboard digital command and control systems have helped increase the payload of Russia's manned Soyuz TMA-01M spacecraft by 70 kg, the head of the Energia space corporation said.
The new equipment replaces the Argon analogue system that has been used for more than 30 years, Vitaly Lopota said.
A Soyuz with a new digital computing and telemetric system will be launched to the International Space Station on October 8.
The new onboard computer, the СС-101, will be tested by Russian cosmonaut Alexander Kaleri, Lopota said.
The Soyuz TMA-01M will replace the Soyuz TMA series spacecraft that have been used until now, Lopota added.
Design of transport human space vehicle Soyuz TMA-M is based on Soyuz TMA’s one which has been commissioned in 2002.
The modification was customized by the Russian Federal Space Agency.
Prime contractor- RCS-Energia.
The vehicle of new series features the same range of objectives as the previous series.

Compare to the basic design, Soyuz TMA-M has the following upgrades:The updates cover one of the steps aimed at development of the advanced new-generation space vehicle (ACV). Flight certification of the units and hardware installed on Soyuz TMA-M will allow to implement relevant solutions for ACV.
External view of the upgraded vehicle is similar to the Soyuz TMA one.
Flight tests of the vehicle will include two missions to the ISS. The third mission of Soyuz TMA-03M is considered as acceptance.
Flight tests are to confirm proper execution of the nominal operations and off-nominal cases, maneuvers, etc.

Soyuz TMA-01М prime and backup crews performed the first fit check with the Soyuz crew vehicle at Baikonur today.
Instructed by RSC-Energia first vice-president Nikolay Zelenschikov, cosmonauts and astronauts began their training session.
The crew vehicle acceptance was carried out first by the prime crew - Alexander Kaleri and flight engineers Oleg Skripochka and Scott Kelly. They also put on their space suits for the leak tesing and performed fit check of the seat liners.
Backup crew- Sergey Volkov, Oleg Kononenko and Ronald Garan- were next to check the vehicle.
In addition, the crews verified the kits to fly in the Soyuz and tested Iridium telephone link.
The next fit check session is to take place on Oct. 2.

Following one of Baikonur’s traditions, Soyuz TMA-01M crews- prime (Alexander Kaleri (Roscosmos), Oleg Skripochka (Roscosmos), Scott Kelly (NASA)), and backup (Sergey Volkov, Oleg Kononenko and Ronald Garan) - raised the flags of their native countries and the flag of Kazakhstan at GCTC premises of the space port this morning.
The ceremony was also attended by officials of Roscosmos, Baikonur administration, representatives of the Kazakhstan Republic, NASA, Space Forces, and many others.
Evgeny Anisimov, Roscosmos’ Department Head at Baikonur, said in his welcome speech that all space industry was working hard to support the upcoming launch of the Soyuz TMA-01M crew vehicle.

Since it has been moved to dedicated thread now, I can post a link to calendar event, where is a countdown timer set for the time of liftoff, and as always you can request a reminder, that will be sent on set time before the event.

Soyuz TMA-01M crew's mission patch and the kid's painting which made up a foundation for the patch artist: 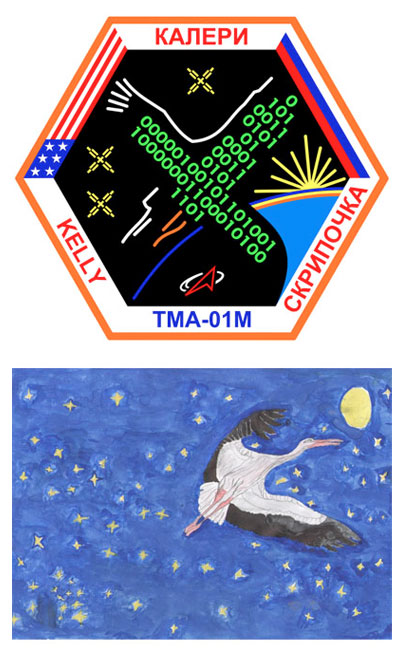 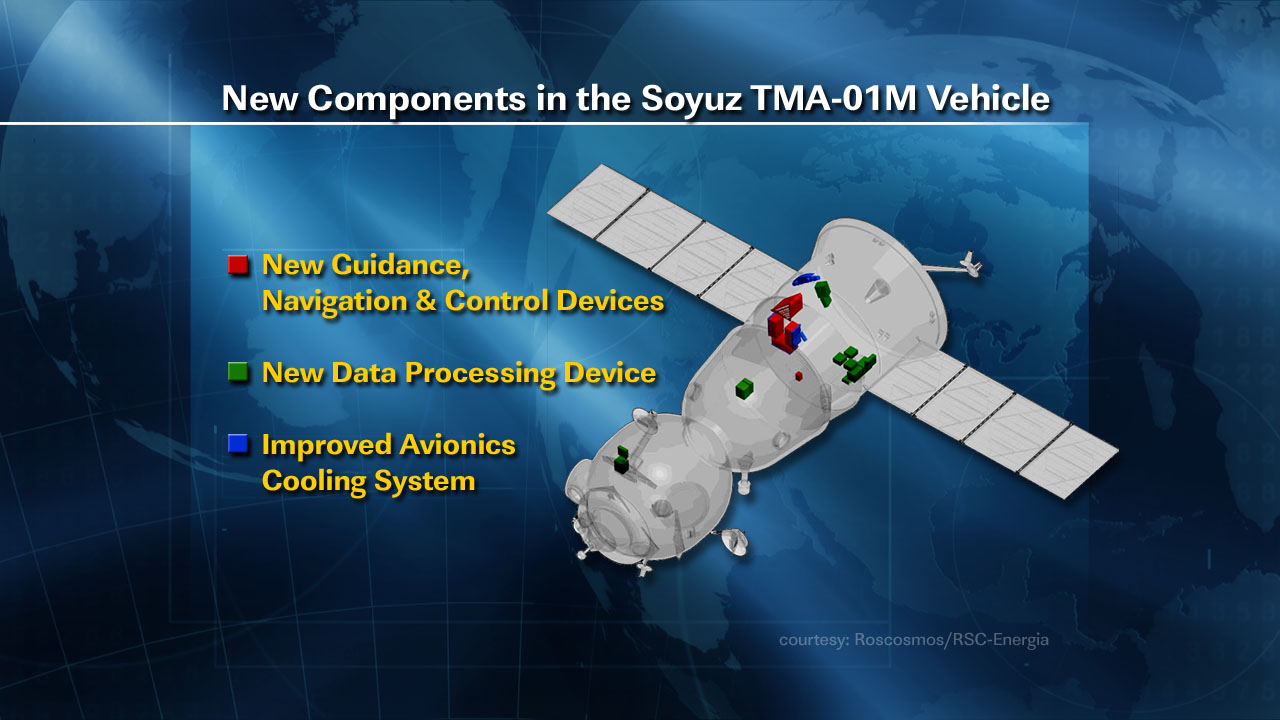 Soyuz FG/TMA-01M Rollout to the pad

Copying here from the "ISS UPDATES" thread, as it has some really good info on the Soyuz TMA-M variant.

Soyuz TMA-01M/24S Launch Preparations:
At the Baikonur Cosmodrome in Kazakhstan, preparations continue for tomorrow evening's launch of Soyuz TMA-01M spacecraft (11:11 PM GMT). L-1 launch ops are underway. The crew, complementing the Exp. 25 station crew, will be Soyuz CDR/ISS FE-1 Alexander Kaleri, ISS FE-3/Exp. 26 CDR Scott Kelly & ISS FE-2 Oleg Skripochka. [Soyuz TMA-01M is the first of the new breed of Soyuz vehicles, looking unchanged from the outside but having the old computer and analog parts replaced by digital avionics. Instead of the traditional triply-redundant Argon-16 guidance computer, in use since 1974, the TMA-M type carries the new TsVM-101 CPU (Central Processing Unit)/computer. Also, five analog processors for monitoring spacecraft systems, each with its own telemetry transmitter, have been replaced with a single new unit called MBITS. This allows rapid pre-launch testing of the spacecraft instead of the previous time-consuming checkouts of each system separately, which in turn allows a doubling of the launch rate. In all, the upgrade replaced 36 old devices with 19 new ones of higher performance, lower mass and reduced power consumption, most of which have been flight-tested several times on Progress cargo ships. The new TsVM/CPU, along with modernized color displays in the cockpit, allows the new Soyuz to be flown by a single professional pilot, instead of two fully trained crewmembers.]

State Board at Baikonur approved the crew of the Soyuz TMA-01M vehicle slated to fly to the International Space Station on Oct. 8.
The crews of the Soyuz:
-Prime (Alexander Kaleri (Roscosmos), Oleg Skripochka (Roscosmos), Scott Kelly (NASA)).
-Backup (Sergey Volkov, Oleg Kononenko and Ronald Garan).
Soyuz TMA-01M launch is scheduled for Oct. 8, 03:10 Moscow time. The vehicle is due to dock to the ISS Poisk module on Oct. 10, at 04:05 MSK.
The meeting of the State Board was traditionally attended by the young winners of Roscosmos’ patch contest 7-year-old Marina Korolenko of Murmansk region, and 13-year-old Sasha Turovsky of Tambov region, who’s design will fly aboard the Soyuz TMA-01M.

Here's some great hi-res photos of the Soyuz-FG rollout to & erection on the launch pad.
B

Are there any online streams for it? 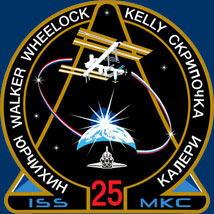 The new Movement/Navigation system exploits Central Computing Core with a bridging device; it has total mass 26 kg and consumes 80 W of energy. The Core's througput is 8 million computations per second, RAM volume is 2000 kBytes. Lifetime is considerably extended, which is now 35,000 hours. A 50% reserve of computation power is built in.

Improvements of the vessel's structure and interfaces with the ISS


A chart that shows locations of the modified parts:

Each flight test must approve that:


The flight tests are to be performed together with the primary expedition delivery tasks according to the assigned mission program.

* 1st two-burn manoeuvre
No code has to be inserted here.

* 2nd one-burn correction
No code has to be inserted here.

The input for the on-board rendez-vous system is given 3 hours before docking in form of state vectors of the spacecraft and the ISS.

5. Docking to the ISS

The vehicle's reliability statistics according to http://www.spacelaunchreport.com/reliability2010.txt:


Sunrise/Sunset and associated twilight times for Baikonur on Friday, October 8, 2010

NASA TV Schedule for October 7 (the times are in EDT):

It's necessary to note that Alexander Kalery is in a way following steps of famous Kostantin Feoktistov who took a seat on a maiden flight of a space ship much of his own design. Being an experienced technical specialist, Kalery was involved in developing the controlling software for the new Soyuz (source) and is known as a seasoned programmer. Now it's his right and duty to perform live testing.

I can only wish that

would be merciful to him and his crew! :hail:

SPACE.com: "For Astronaut Twin, Launching Into Space Is All In the Family".

The Zero-G indicator/mascot for today's launch is a "Plush Monkey"!

Note: You'll need to use this tool to see what I wrote!

I wonder if this is included in the digital upgrades? :rofl:

Here's calendar event for docking to ISS, and here you can request a reminder for that event.

Soyuz is definitely cool. With all the digital controls developed over the past 20 years. Do we really even need a space shuttle??

Look at it this way, we can send crew up with a Soyuz. And cargo with an HLV. For those of you that say the shuttle provided a workbay and toolbox. Why not just have a platform already up there and established? Instead of always bringing your workshop with you. Leave it on-site!


For some reason, Russian spy Anna Chapman watched the launch! 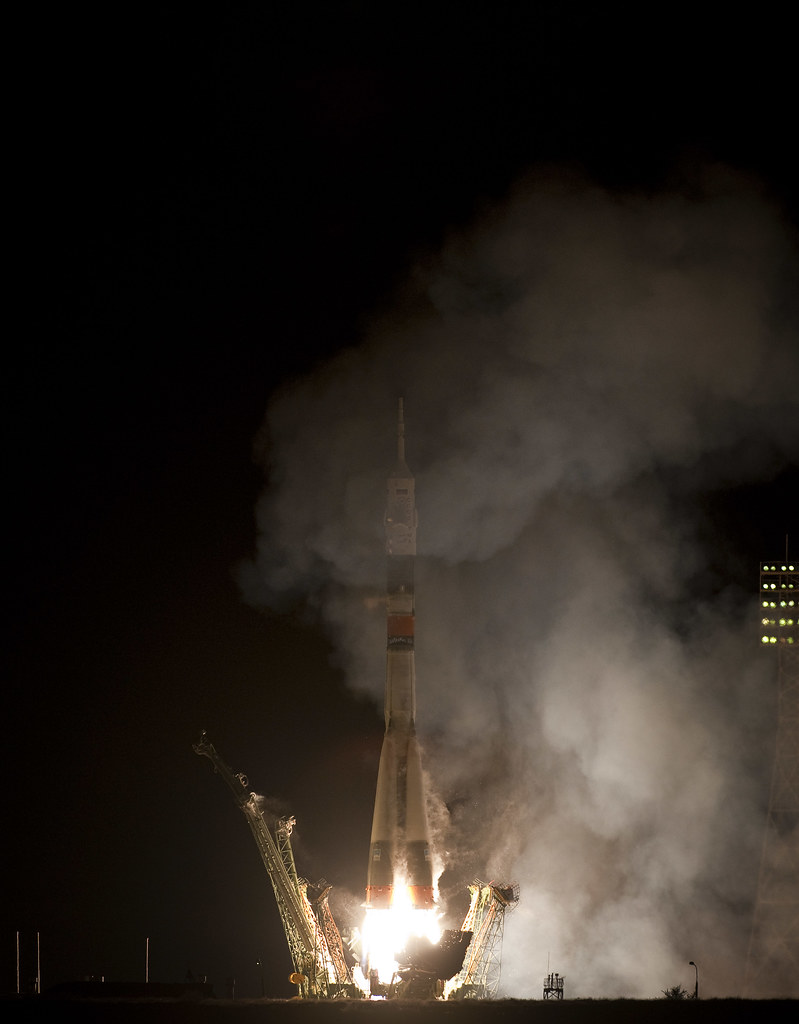 Note: You'll need to use this tool to see what I wrote!
Click to expand...

Just reboot and start over!

BTW, I was wrong about the Commander's callsign. Vityaz-2 was actually a callsign of A.S. Viktorenko who was a CDR on Soyuz TM-14 mission, at which mission Alexander Kalery was a FE.

For his first mission with him in CRD role (Soyuz TMA-3 / ISS-8), Alexander took callsign Ингул (Ingul, after the Inhul, a river in Ukraine). He is retaining it on the current mission, too.

Maybe, she HAS already been seduced by James Bond and came there to grab and betray him mysteries of the Cutting Edge Digital Space Ship? :rofl:

The Guardian: "Anna Chapman waves off space rocket in Kazakhstan".