Mission: Supply run to the ISS replenishing onboard reserves of fuels, food, water and other consumables essential for continued manned flight of the complex

The M-02M is the 2nd specimen of the new modification of Progress series spacecrafts with upgraded avionics. The spacecraft's mass is 7290.0 kg

Streaming video coverage will be available tomorrow shortly before the launch with Russian narration by the following link (a public TV channel):

Progress 33 has launched right on time from the Baikonur Cosmodrome, Kazakhstan.

Mr. Putin is on air now, has the launch been and gone?

Notebook said:
Mr. Putin is on air now, has the launch been and gone?

Marvellous, I nip out for a minute, and its gone.

The spacecraft is safely in orbit, doing fine.


Notebook said:
Marvellous, I nip out for a minute, and its gone.

Just 20 seconds of coverage between some advertisements and Mr. Putin. This shows the real level of importance of space for the modern Russia quite well. At least, the cultural side. A rocket incident in Baranovka village of Zmeinorogsky District of Altay Territory, Russia: a fragment of a space rocket reported to fall on the roof of a two-store residential building. According to Altay Territory's Emergency Command's head office, no people were hurt. An investigatory commission is working on site.

The incident has happened on the Thursday's night. As eyewitnesses say, the house residents heard double clapping sound and then a sound of an object slamming onto the roof. In the morning, resque teams and firefighters arrived to find a metal fragment on the roof. The object is sized 35 to 120 cm, ITAR TASS reports.

"That was a fragment of a booster stage of the Progress space ship that has launched today at 22:37 MSK from Baikonur on the International Space Station mission. Members of the incident commission have acknowledged attribution of the fragment to the launch vehicle" said Elena Kravtchukovskaya, the Territory's Emercom's press office's head.

The building's roof is not damaged, nobody is injured. Zmeinogorsky district where the incident took place, overlapls with the designated alienation zones used to deposit rocket debris during launches off Baikonur Cosmodrome.

At the same time, Roscosmos is questioning the fact of a Soyuz rocket body's falling on the residential building in Baranovka village, said to RIA NOVOSTI Alexander Vorobyov, an official representative of the Federal Space Agency.

"We are in doubt that the fragment really hit the house - our specialists don't confirm this. It cannot be ruled out that the fragment might be simply brought on the roof by a local from a different location. It should be considered the launch of the Soyuz rocket with Progress cargo space ship was commenced yesterday, and the expected time of its debris falling was known to the locals, which might become the occassion for them to carry over a fragment found at a different time or in a different location, on the house's roof to be in position to sue for a compensation.

After all, the fragment is only one and the house is located outside the designated alienation zone. According to our data, there was no damage or people hurt", said Vorobyov.

NASA still persists in referring to Progress ships by the wrong designation - it's Progress M-02M, the 33rd Progress to the ISS! (Someone was grumbling about it here)

Suzy said:
NASA still persists in referring to Progress ships by the wrong designation - it's Progress M-02M, the 33rd Progress to the ISS! (Someone was grumbling about it here)
Click to expand...

You prefer the Soyuz nomenclature, like Soyuz TMA-16/20S, or for the Shuttle like STS-127/2J/A? It is a bug-bear of mine too

The debris fragment in question

tblaxland said:
You prefer the Soyuz nomenclature, like Soyuz TMA-16/20S, or for the Shuttle like STS-127/2J/A? It is a bug-bear of mine too
Click to expand...

Surely, NASA is free to number Progress flights as they see fit, but I can't see why creating an additional confusion by double numbering is useful. Why aren't we calling STS-88 a "shuttle #1" instead and so on, then?

To contrubute to this thread, here are some pictures of the launch published by Energia.

SiberianTiger said:
Surely, NASA is free to number Progress flights as they see fit, but I can't see why creating an additional confusion by double numbering is useful. Why aren't we calling STS-88 a "shuttle #1" instead and so on, then?
Click to expand...

Actually STS-88 is referred to as STS-88/2A by NASA (see caption of this photo for example). Suzy's point is they are not consistent, especially from the point of view of international observers like ourselves. I guess I can live with it though :dry:

The final approach is started (although the video signal is lost for now).

There is a contact and capture after a smooth completely automatic approach and docking (unlike the last problematic time with the new series Progress M01-M).

Some pics of the docking:

It looks like the Soyuz-U rocket that was used to orbit the Progress M-02M has finally returned roughly to its birthplace.

The upper stage's reentry created a superb view for the locals of the South-Eastern Russia who were looking up around the midnight.

Today, around 00:12-00:14 Moscow time I observed something looking like a meteor shower in Saratov. I noticed them already in the middle of the sky, they were moving to North-Eastern direction. Consisted of many bright debris, the group was about as wide as a full moon. About 10°-15° one more piece was moving. The velocity of the movement seemed very slow, much slower than the usual meteor's. I watched for about 10-15 seconds. Over the city's horizon they lost their brightness a bit, but still remained brighter than anything in the night sky except for the Moon.
Click to expand...

May 10/11 night of the year 2009. The observation point is Samara region (3 km away from Bogatoye village).

We were off to a night-time catfish fishing together with me father. Our location were the woods on the bank of the Samarka river. The night was very calm and starry. We sat near our campfire on chairs. Can't remember what time that was. Maybe around 1 a.m. The full moon was high up over the river rim to produce a bright moon-glade (about 15° over horizon).

Suddenly, a huge object "crawled out" from behind trees. For me, it first looked like a giant glowing submarine, but when I yelled to my father I looked closely and saw that it was more like a huge body a size of the moon with a trail behind it. Not exactly like a usual bolide. I've seen bolides several times over my life and every time the trail radiated a noticeably greenish light, and it always produced hissing and cracking sound.

This time, it moved in COMPLETE silence.

The object then broke apart into several pieces (some bigger, some smaller). We could see them as a group of objects (I counted 5 large pieces), all moving together in the same direction. The leader, the largest object was ahead of all. The burning tail was half of the sky long. The sight was plainly horrible. Exactly like in Armageddon movie and others of the sort. But it happened right over our heads. It moved from the NW to the East, moved right above the moon. We watched it for a short time, but much longer that a usual bolide lives.

It flew about 4 times slower, however. But the worst thing, it was ABSOLUTELY silent. This is the most odd thing.

My father worked over 26 years in Samara Space Centre and he knows a lot about space. He said it was very likely a destruction in the atmosphere of a spacecraft. First, it was very bright white flame that's produced when an aluminuim alloy burns. Second, the lack of sound might be due to composition of the object of big hull sheets that do not exert much of resistance and therefore, sound.
Click to expand...

The following images were caught on camera by an observer in Tula region:

She described it as a small ball of orange light moving over the Southern horizon from right to left, producing no sound either. She watched the object over several minutes until it got obscured by low clouds.

A triangulation done over the first shot produced the altitude of object 70 km and the trail length of about 4 km.

Finally, a messages on falling objects appeared in Kazakh media which are might be connected to the event too:
http://newsru.com/world/15may2009/balls.html

Mysterious balls fell from the sky in Kazakhstan. Authorities claim there were no UFO's.

Something strange is going on in Kazakhstan. Western Kazakhstan Territory Emergency Situations Department reported that on Thursday night, two unknown object fell in the field near Razdol'noye village of Zelenovsky District of Western Kazakhstan. The object looked like metal balls. At the same time, the department denies messages of appearance of any UFO's over the territory.

The balls were made of hard metal and had holes about 1.5 centimetres wide each. They were empty inside, one ball had some numbers on it. From outside, the balls were partly molten, for they had obviously exposed to high temperature environment. One ball was whole, another was ripped open.

According to Elena Arefina from the Department's press service, one of this balls was found by the local farmers during their harrowing of the field. Another one was found by a tractor driver as early as in the end of April. "This young man had seen a trace of red colour in the sky and got very excited, because he thought it was a star that fell down from the sky. He drove close to the impact point, noticed the ball and took it home."

The locals tried to damage the objects with a chisel, but failed to puncture of bend the metal ("only sparks flashed out", said an eyewitness).
Click to expand... 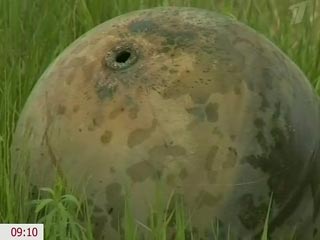 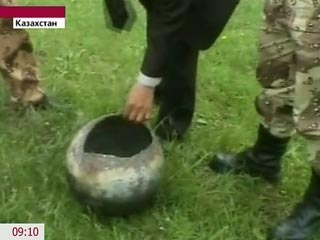 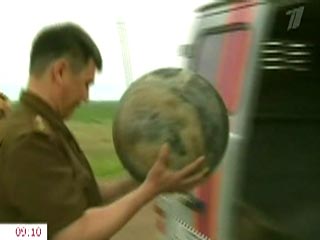 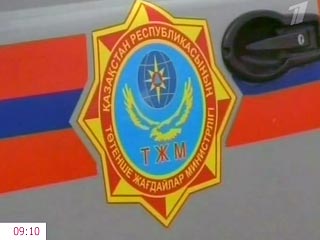 Fragments of the Progress M-02M cargo vehicle have fallen down today in the defined area of the Pacific, about 3400 km from Wellington, New Zealand. Coordinates of the falling center 42deg.37min.s.l., 219deg.26min.e.l. The main engine was started for retroburn at 15:43:00 GMT, following the command from the Mission Control Center- Moscow.

The Progress undocked from the ISS on June 30. Until yesterday, it was flying autonomously. On July 12, the vehicle performed rendezvous maneuver to verify proper functioning of the systems in the new docking port on Zvezda-SM transfer compartment.

Progress M-02M was launched from Baikonur on May 7. In addition to nominal cargo supplies, the vehicle delivered 3 St. George`s ribbons to the station. To honor the heroes died in World War II, the ISS crew accomodated the ribbons on the panel inside the station, in the TV-session zone.