A concise history of NASA's upcoming Mars rover is written below.

As of this time, it looks like there may be two rovers scheduled to launch towards Mars in 2020. This means that the ExoMars rover will miss the more favorable 2018 launch window and launch during the same year as NASA's newly conceived rover. Shortly after NASA had to terminate its participation in ExoMars in 2012, it announced a new rover without any of its scientific objectives outlined. Nonetheless, the priority for the rover to cache samples as desired in the Planetary Decadal Survey was maintained, although NASA does not have any plans (or funds, especially) to return core samples from Mars. Whether the rover will hold onto the samples or leave them on the Martian surface after they have been collected is still undecided.

Interestingly, it turns out that NASA is indeed making another Curiosity to some degree. The new mission will borrow the design of the Mars Science Laboratory. This happens to save money on the flagship spacecraft, reducing the cost to an estimated $1.5 billion. Compare that with $2.5 billion for MSL.

The rover's objectives were announced in 2013 and proposals to meet them have been submitted. Among the goals, there's a focus on life detection that hasn't been seen since Viking:

Just a week before this post on July 31, the rover's payload has been announced. Some new instruments have capabilities that are improved over Curiosity (such as stereo zoom cameras), but there is less scientific mass being transported to the surface of Mars. This time, only $130 million will be spent on developing the instrument payload. In total, there are seven scientific instruments that are listed below which have been included in this gallery. Now the rover can truly start to take shape. As of August, the landing site is still unknown.

Van Kane wrote a blog post explaining the 2020 rover's instrumentation. In short, the remote sensing and contact instruments are designed to quickly interrogate an area to find good samples for caching. A highly capable mass spectrometer, CODEX, has been ignored in favor of MOXIE to demonstrate the ability to extract oxygen from the Martian atmosphere. The remaining, approved science instruments have an improved capability over Curiosity's to analyze local elemental and mineralogical composition. To really revolutionize the understanding of Mars, NASA appears to be betting on the ability to return the core samples to Earth. The samples must be really compelling in that case.


...is sometimes considered a compelling argument

Alright NASA, enough of all these new Mars

s to the outer planets or for an actual manned expedition to Mars.

Pioneer said:
Alright NASA, enough of all these new Mars

Also, this 2020 mission seems the most "Viking-ish" NASA mission since the Viking landers themselves. Many things evolved from the 1970s and we should try another life-looking probe, even with null or inconclusive results.

But I have to agree that the lack of missions to the outer planets' moons (those missions are too far in time) is annoying.

Pioneer said:
I think NASA should redirect those funds for

$1.5 billion isn't much towards a manned Mars mission. That said, NASA could have a fantastic manned or unmanned program if it terminated one or the other. Now we're left with an unsatisfying manned and unmanned program, each with (very roughly) $6 billion.

However, the $1.5 billion could fund most of a flagship mission to Uranus or Europa. The 2020 rover has plenty of criticism over NASA's focus on Mars, but none of NASA's programs are doing well maybe except Earth science. I recall reading that if a more affordable Europa mission was around at the time (under the $4.7 billion proposal like this), Europa might have been the number one destination in the Planetary Decadal Survey. Instead, NASA's 2020 rover is trying to satisfy what the survey had in mind.

What worries me about sending humans to Mars, other than the cost, is contamination of a potentially inhabited planet.

I doubt Mars is currently inhabited. And I actually wouldn't have any problems with contaminating it.

I'd love to force microbial life to evolve in lab conditions on Earth so they could survive on Mars, then planting them there and see what they can do.

If microbial life can be evolved to survive on Mars, then it seems likely there would already be something living there. There's Martian caves, certain crater slopes, and the underground in general which may be more habitable. It's not good to contaminate the planet and delegitimize any future detection of life, whether past or present. Humans carry countless microbes and how resilient they are is still being discovered.

Life on Mars is a catch-22; if no life is discovered, that does not mean life doesn't exist in another area. Realistically, one can never be certain. But it's unwise to contaminate Mars if life might exist elsewhere. Humans cannot be kept at the planetary protection standards required for any robotic Mars explorer. 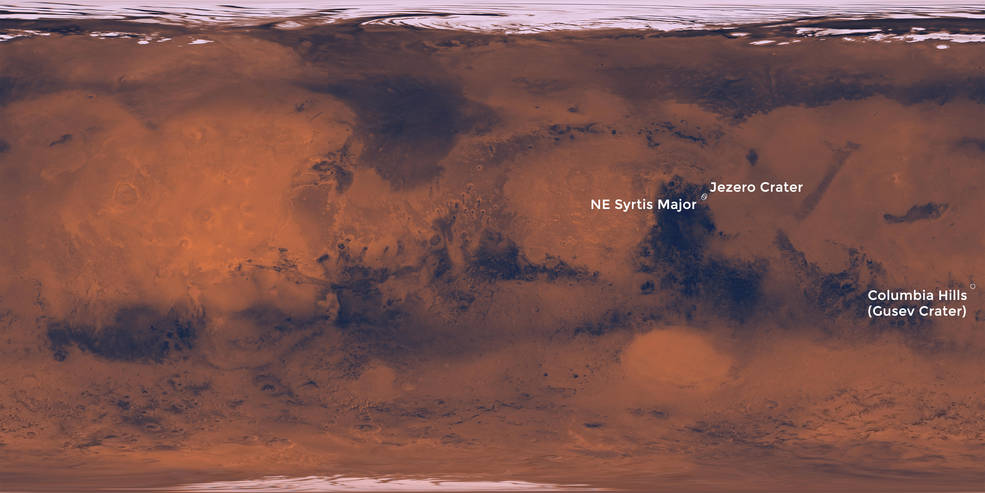 Participants in a landing site workshop for NASA’s upcoming Mars 2020 mission have recommended three locations on the Red Planet for further evaluation. The three potential landing sites for NASA’s next Mars rover include Northeast Syrtis (a very ancient portion of Mars’ surface), Jezero crater, (once home to an ancient Martian lake), and Columbia Hills (potentially home to an ancient hot spring, explored by NASA’s Spirit rover).
Click to expand...

Wouldn't be surprised if one of these sites ends up being where SpaceX lands a Dragon.

Confirmed! A helicopter is going to Mars! 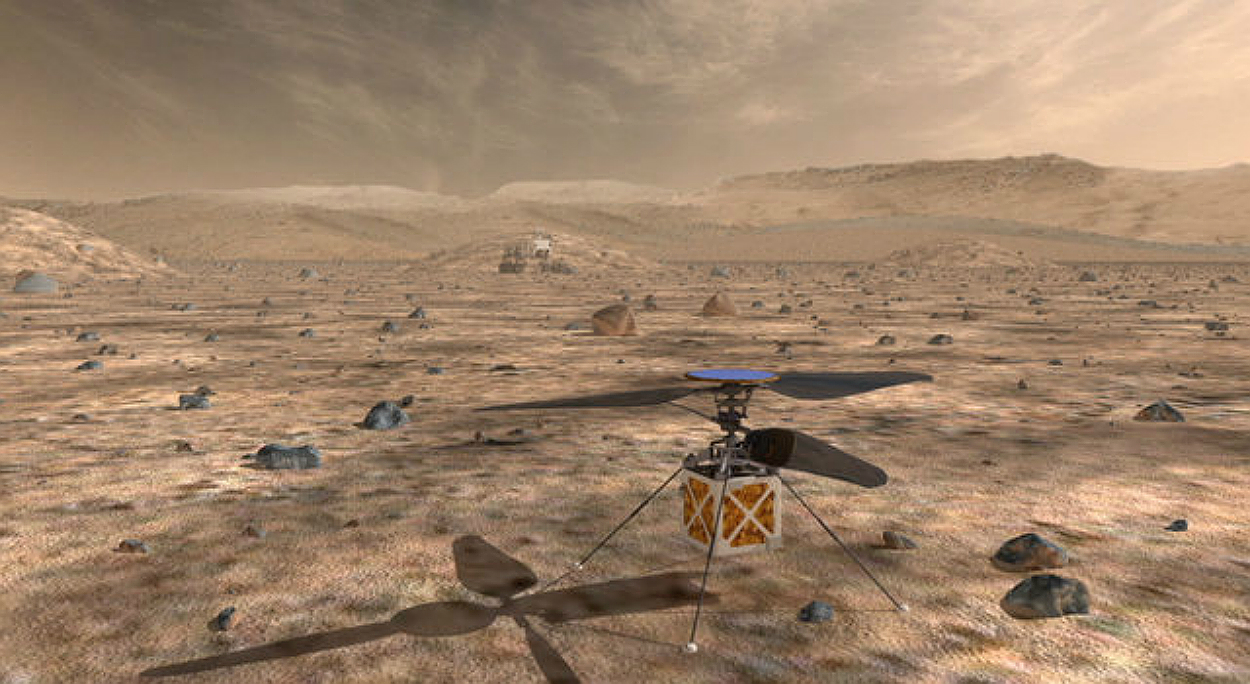 The Mars Helicopter, a small, autonomous rotorcraft, will travel with the agency’s Mars 2020 rover mission, currently scheduled to launch in July 2020, to demonstrate the viability and potential of heavier-than-air vehicles on the Red Planet.

“NASA has a proud history of firsts,” said NASA Administrator Jim Bridenstine. “The idea of a helicopter flying the skies of another planet is thrilling. The Mars Helicopter holds much promise for our future science, discovery, and exploration missions to Mars.”

U.S. Rep. John Culberson of Texas echoed Bridenstine’s appreciation of the impact of American firsts on the future of exploration and discovery.

“It’s fitting that the United States of America is the first nation in history to fly the first heavier-than-air craft on another world,” Culberson said. “This exciting and visionary achievement will inspire young people all over the United States to become scientists and engineers, paving the way for even greater discoveries in the future.”
Click to expand...

Started in August 2013 as a technology development project at NASA’s Jet Propulsion Laboratory (JPL), the Mars Helicopter had to prove that big things could come in small packages. The result of the team’s four years of design, testing and redesign weighs in at little under four pounds (1.8 kilograms). Its fuselage is about the size of a softball, and its twin, counter-rotating blades will bite into the thin Martian atmosphere at almost 3,000 rpm – about 10 times the rate of a helicopter on Earth.


The helicopter also contains built-in capabilities needed for operation at Mars, including solar cells to charge its lithium-ion batteries, and a heating mechanism to keep it warm through the cold Martian nights. But before the helicopter can fly at Mars it has to get there. It will do so attached to the belly pan of the Mars 2020 rover.

“The altitude record for a helicopter flying here on Earth is about 40,000 feet. The atmosphere of Mars is only one percent that of Earth, so when our helicopter is on the Martian surface, it’s already at the Earth equivalent of 100,000 feet up,” said Mimi Aung, Mars Helicopter project manager at JPL. “To make it fly at that low atmospheric density, we had to scrutinize everything, make it as light as possible while being as strong and as powerful as it can possibly be.”

Once the rover is on the planet’s surface, a suitable location will be found to deploy the helicopter down from the vehicle and place it onto the ground. The rover then will be driven away from the helicopter to a safe distance from which it will relay commands. After its batteries are charged and a myriad of tests are performed, controllers on Earth will command the Mars Helicopter to take its first autonomous flight into history.

“We don’t have a pilot and Earth will be several light minutes away, so there is no way to joystick this mission in real time,” said Aung. “Instead, we have an autonomous capability that will be able to receive and interpret commands from the ground, and then fly the mission on its own.”

The full 30-day flight test campaign will include up to five flights of incrementally farther flight distances, up to a few hundred meters, and longer durations as long as 90 seconds, over a period. On its first flight, the helicopter will make a short vertical climb to 10 feet (3 meters), where it will hover for about 30 seconds.

The American space agency (Nasa) says it will send its 2020 Mars rover to a location known as Jezero Crater.
Nasa believes the rocks in this nearly 50km-wide bowl could conceivably hold a record of ancient life on the planet.
Satellite images of Jezero point to river water having once cut through its rim and flowed via a delta system into a big lake.
It is the kind of environment that might just have supported microbes some 3.5-3.9 billion years ago.
This was a period when Mars was much warmer and wetter than it is today.
Click to expand...

Delayed and now testing the end of the launch period... :uhh:

Pioneer said:
Alright NASA, enough of all these new Mars

I can't say I don't agree, but I'm highly doubting manned expeditions to Mars will be a thing any time soon, although it may happen soon enough. As for the outer planets, I definitely do agree. :thumbup:

A small chunk of Mars will be heading home when the US space agency launches its latest rover mission on Thursday.

Nasa's Perseverance robot will carry with it a meteorite that originated on the Red Planet and which, until now, has been lodged in the collection of London's Natural History Museum (NHM).

The rock's known properties will act as a calibration target to benchmark the workings of a rover instrument.
Click to expand...