GSAT-6A is an advanced S-Band communications satellite built by the Indian Space Research Organization for operation under INSAT’s communications satellite fleet, primarily for use by the government and military while also serving as a technology testbed for mobile communications and improved network management techniques. Built on ISRO’s I-2K platform, GSAT-6A is a close copy of the GSAT-6 satellite launched in 2015 and delivers a combination of wide-beam C-Band and high-capacity S-Band spot beam coverage. 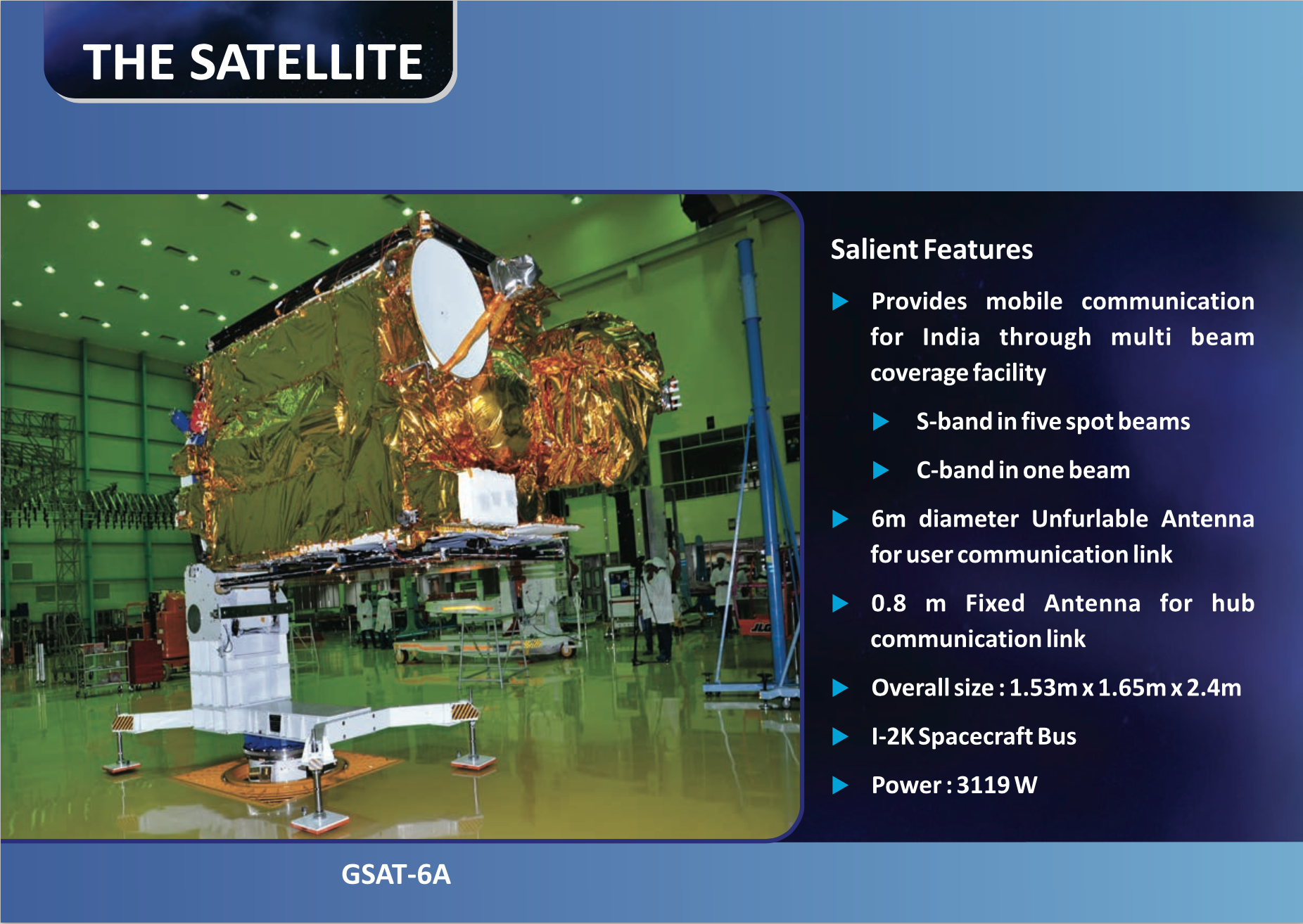 Weighing in at 2,140 Kilograms, GSAT-6A utilizes ISRO’s I-2K platform, a six-meter Unfurlable Antenna Reflector for S-Band up and downlink and an 0.8-meter deployable C-Band reflector to carry the wide-beam up/downlink. S-Band is employed to connect mobile terminals to the GSAT-6A satellite while the C-Band system carries the up/downlink between the satellite and its hub stations in India.

The six-meter S-Band antenna is the largest in-space deployable launched by ISRO to date, employing a lightweight structure of a perimeter truss segment which can fold-out like a camping chair and offers stability through a series of cross-beams between the two perimeter tiers that hold in place the metal mesh serving as reflective area and supported in a parabolic shape. The S-Band system generates five spot beams over the Indian main land employing the frequency reuse scheme to increase the efficiency of the spectrum utilization. 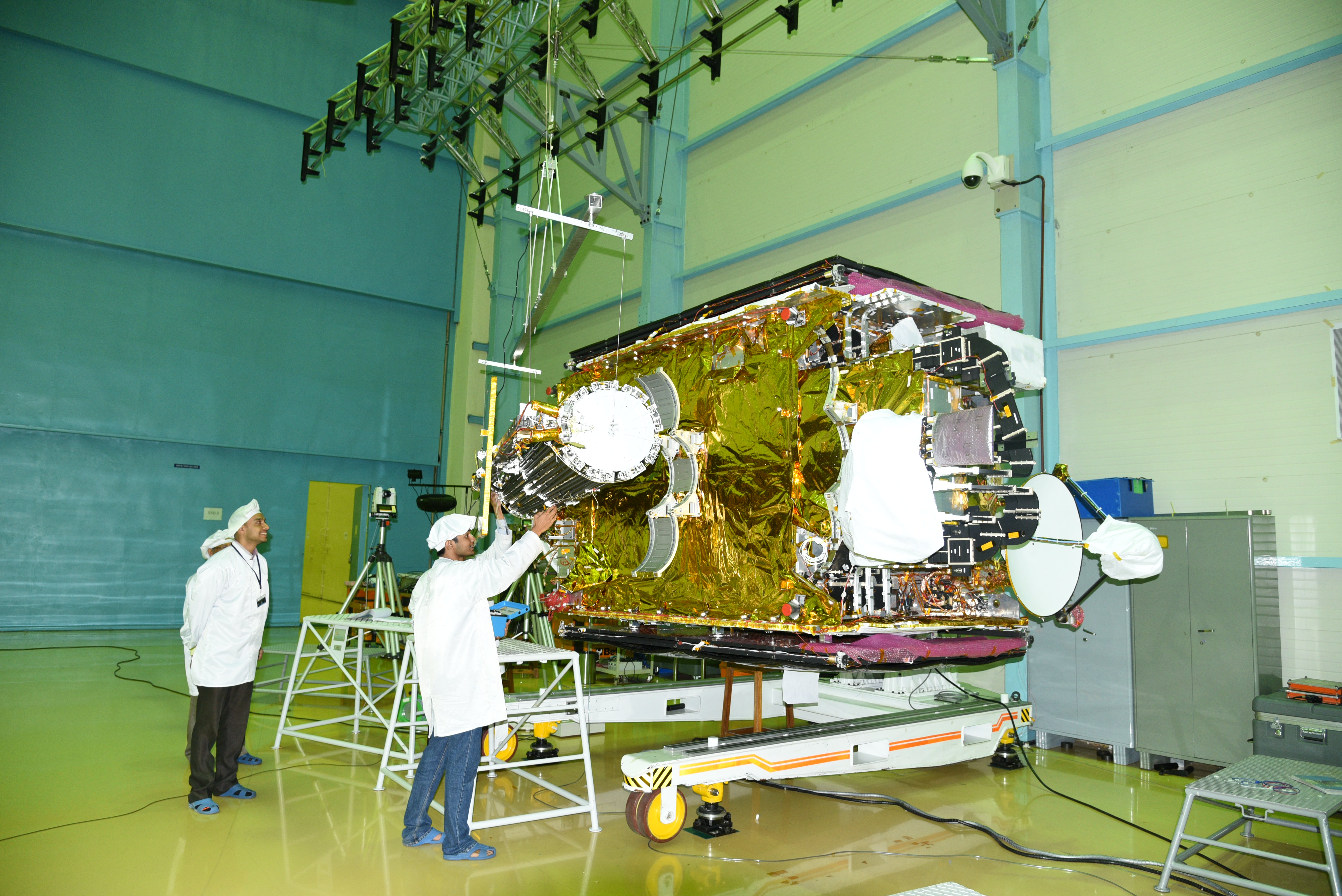 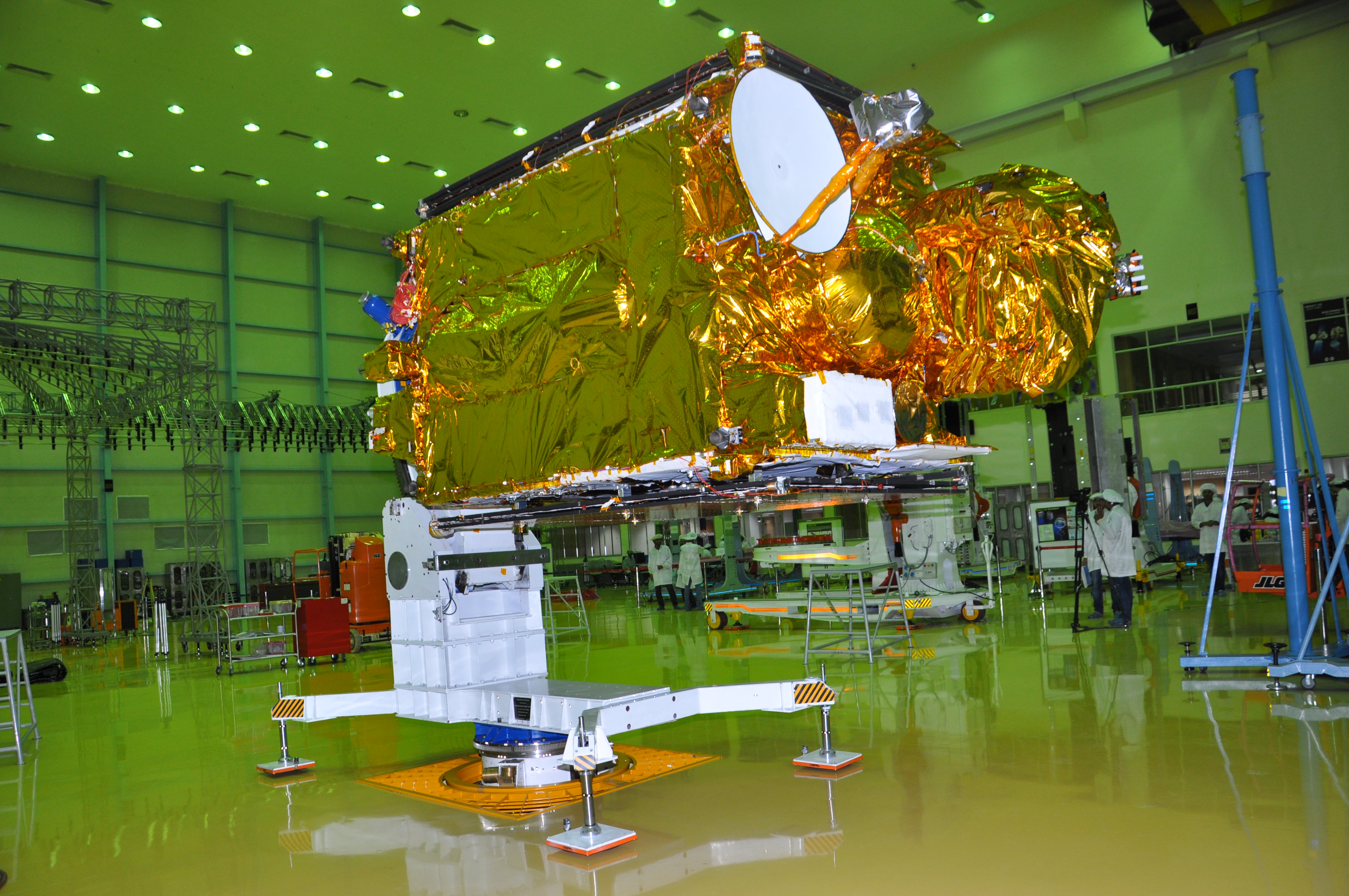 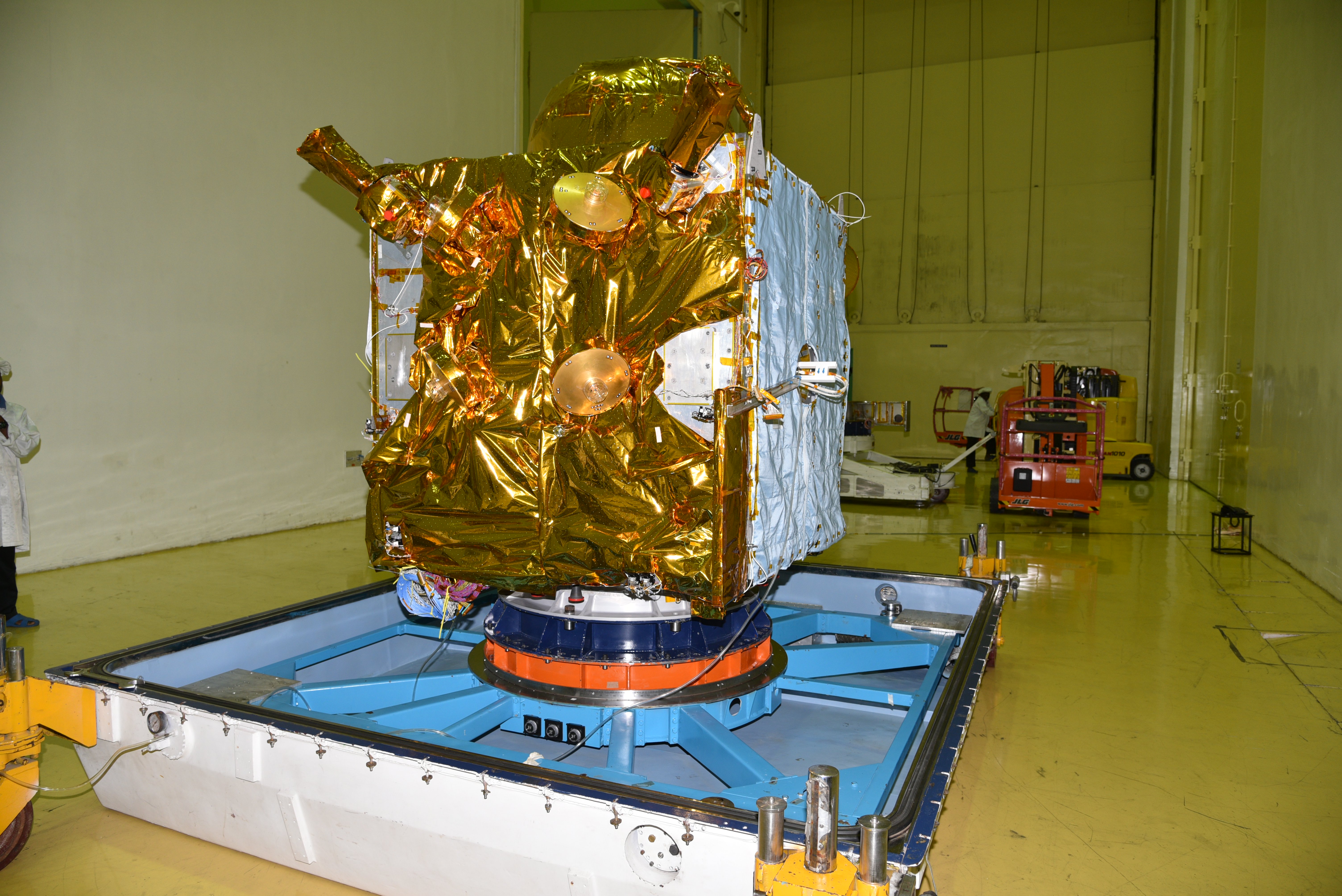 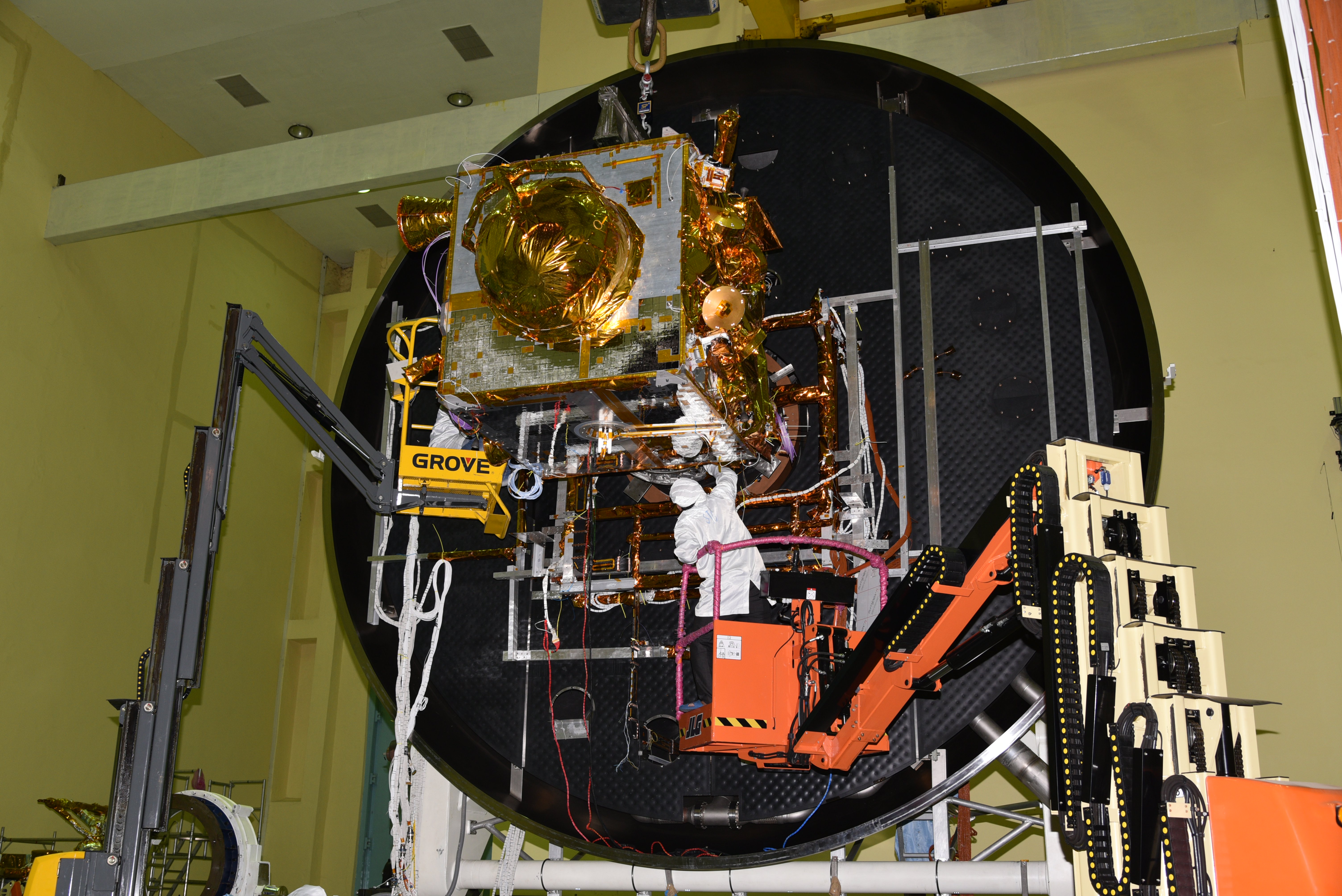 The communications payload of the satellite consists of five 9 MHz C x S-Band transponders generating five S-Band spot beams for downlink while the uplink is carried via C-Band from a hub station in India. Five S x C-Band transponders, each with a bandwidth of 2.7 MHz, receive their uplink in S-Band from mobile user terminals and downlink their communications to ground stations in C-Band. The satellite’s Telemetry & Telecommand system uses a C-Band solution from heritage ISRO programs.

The exact purpose of the GSAT-6A satellite has not been made clear by ISRO, though media reports the satellite will be dedicated to government and strategic communications. ISRO said about the mission: “The satellite will also provide a platform for developing technologies such as demonstration of 6 m S-Band Unfurlable Antenna, handheld ground terminals and network management techniques that could be useful in satellite based mobile communication applications.” 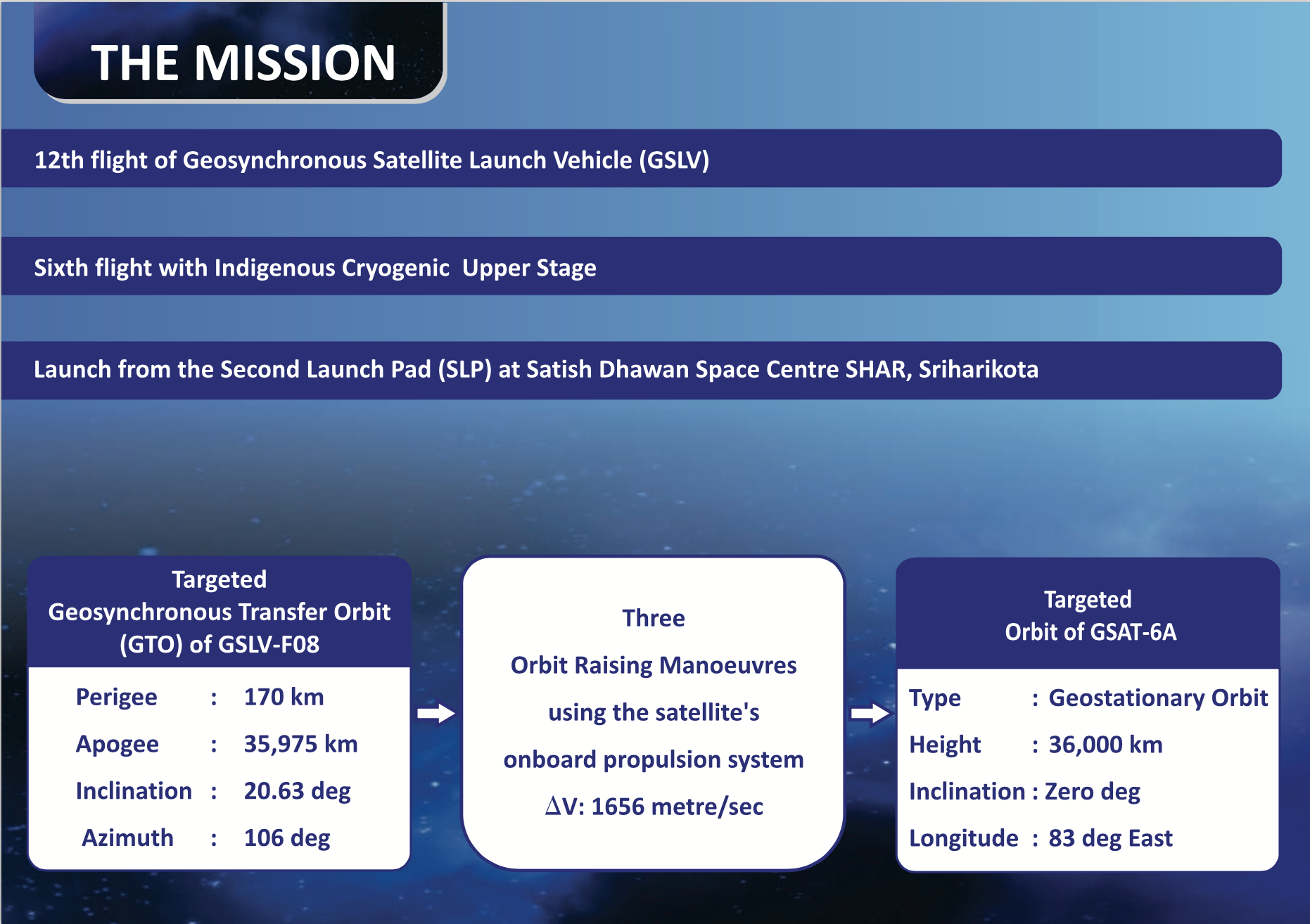 The Geosynchronous Satellite Launch Vehicle, better known by its abbreviation GSLV, is an Indian expendable launch system that was developed and is operated by the Indian Space Research Organization.

The GSLV project was initiated back in the 1990s when India determined that it needed its own launch capability for Geosynchronous Satellites to become independent from other launch providers. At the time, India was relying on Russian/Soviet launch vehicles for heavy satellite launches. With the emergence of commercial launch providers, such as Arianespace, India shifted its GSO Satellites to those while GSLV was being developed.

The launch system uses a large number of heritage components already employed on the Polar Satellite Launch Vehicle that first flew in 1993. The three-stage GSLV has an improved performance over four-stage PSLV with the addition of strap-on liquid-fueled boosters and a cryogenic upper stage. GSLV uses a combination of solid fueled, liquid-fueled and cryogenic stages.

The sixth flight of the GSLV marked the first flight of the Mk II variant that uses the Indian-built cryogenic upper stage. The flight test was not successful as the rocket encountered a malfunction of the Fuel Booster Turbo Pump on its third stage causing the loss of the vehicle and GSAT-4 satellite. Flight 2 of the Mk II version was attempted in 2010 and marked another failure as the vehicle was destroyed by the Range Safety Officer after a loss of control that was the result of a structural failure.

After that, the GSLV launch system underwent a thorough review and improvements were made to its Guidance System and Upper Stage to increase its reliability. The GSLV Return to Flight Mission was successfully performed in 2014.

The vehicle features three stages plus an optional fourth stage. The first stage is a solid-fueled stage holding 138,000kg of propellant.

The upper stage is a cryogenic stage that uses LOX and LH2 as propellants. 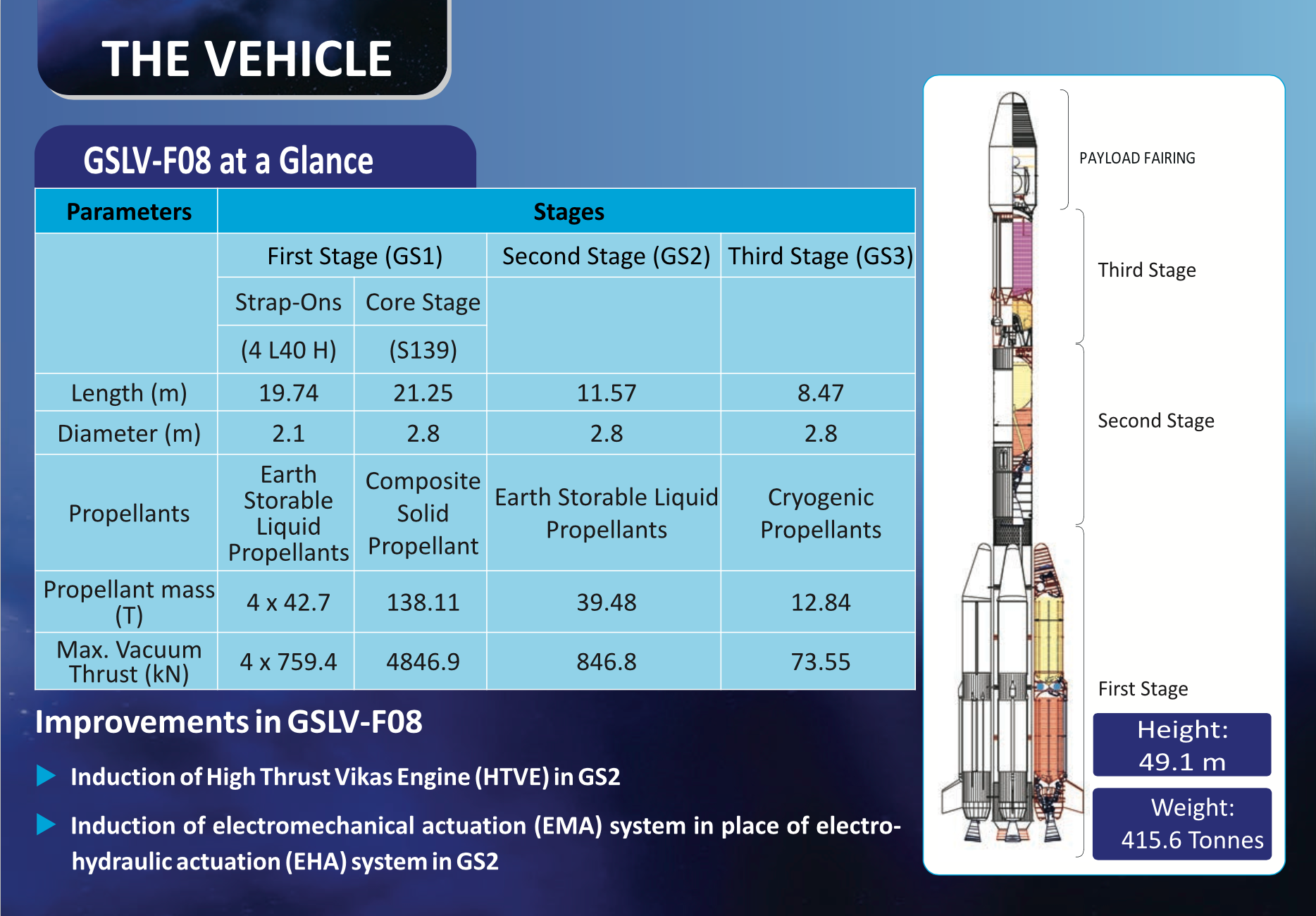 Vikas goes back to a cooperation between the French Space Agency CNES and ISRO under which ISRO provided manpower for the development of the Viking 4 engine for the Ariane 2-4 launch vehicle fleet in exchange for licensing rights of the engine design for its own launch vehicle fleet. GSLV GS2 Stage with upgraded HTVE Engine – Photo: ISRO
ISRO adapted the original Viking design for domestic production in India, qualified the engine for longer burn times than on the Ariane rocket and went through a gradual upgrade process to arrive at the Vikas 2 and 4 engines flying on PSLV, GSLV and LVM3 today. In 2016, the Liquid Propulsion Systems Center announced it had successfully performed a 20-second hot-fire test of an upgraded Vikas that would eventually become the HTVE – offering a thrust increase of six percent.

According to ISRO, the vacuum version of the HTVE flying on the GS2 stage on Thursday will generate a thrust of 846.8 Kilonewtons, up from 799kN for the Vikas 4B through raising its chamber pressure from 58 to 62 bar. Consequently, the engine will burn propellant at a rate of 298 Kilograms per second and reduce the burn time of the second stage by seven seconds.

Future performance upgrades planned on the GSLV rocket include the replacement of the Vikas 2 engines on the four L40 boosters with sea-level versions of the HTVE (planned for Chandrayaan-2) and the Cryogenic Upper Stage, currently flying in its CUS-12 variant with 12,800kg propellant capacity, will be upgraded to CUS-15 in 2018 or 2019. Additional performance will be gained through dry mass reduction in various areas of the launch vehicle. 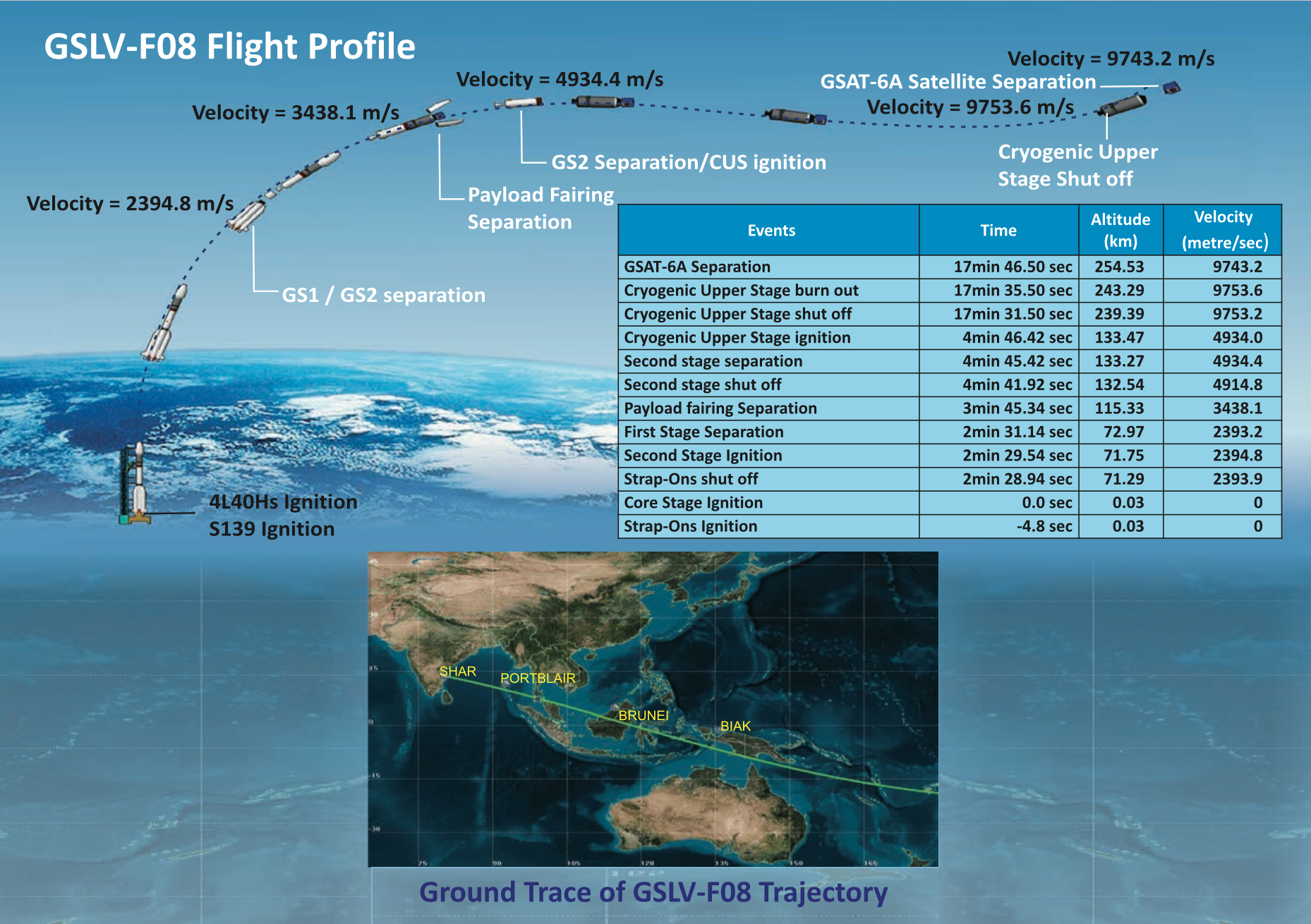 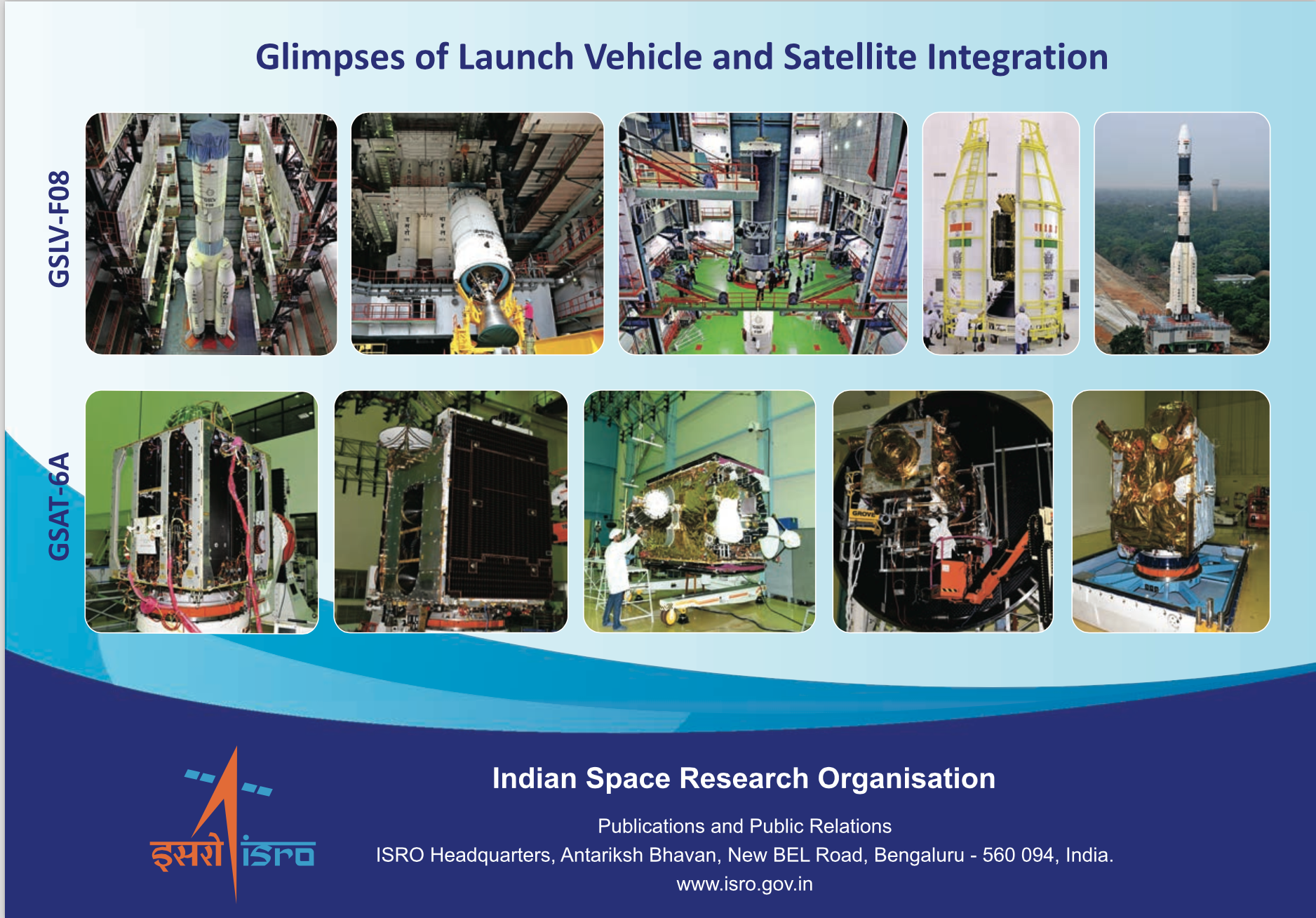 Launch in less than 20 minutes!

That's a handsome launch vehicle. I'm a big fan of fins on rockets like that. The Saturn family also had them. Classic look.

The second orbit raising operation of GSAT-6A satellite has been successfully carried out by LAM Engine firing for about 53 minutes on March 31, 2018 in the morning.

After the successful long duration firings, when the satellite was on course to normal operating configuration for the third and the final firing, scheduled for April 1, 2018, communication from the satellite was lost.

Efforts are underway to establish the link with the satellite.
Click to expand...

Initial analysis points to a power system failure, but Isro has not officially confirmed anything.

One person familiar with satellite technologies said spacecraft have redundancies or backups; MCF worked on it overnight on Saturday.

Source: Times of India, The Hindu, ISRO
You must log in or register to reply here.