Confirmed! ESA's next science mission to focus on nature of exoplanets! The nature of planets orbiting stars in other systems will be the focus for ESA’s fourth medium-class science mission, to be launched in mid 2028.

Ariel, the Atmospheric Remote‐sensing Infrared Exoplanet Large‐survey mission, was selected by ESA today as part of its Cosmic Vision plan.
Click to expand...


ARIEL, the Atmospheric Remote-sensing Infrared Exoplanet Large-survey, was selected as the fourth medium-class mission in ESA's Cosmic Vision programme. It will study what exoplanets are made of, how they formed and how they evolve, by surveying a diverse sample of about 1000 extrasolar planets, simultaneously in visible and infrared wavelengths. It is the first mission dedicated to measuring the chemical composition and thermal structures of hundreds of transiting exoplanets, enabling planetary science far beyond the boundaries of the Solar System.​
Mission Summary:

ARIEL will address one of the key questions within ESA's 2015-2025 Cosmic Vision Plan: What are the conditions for planet formation and the emergence of life?

Despite the large numbers of different exoplanets that have been discovered to date, there is still no clear link between the presence, size, or orbital parameters of a planet and the nature of its parent star. To understand more about exoplanets and exoplanetary systems, an unbiased large-scale survey of exoplanets is required — to perform such a survey is ARIEL's key observational objective.

ARIEL will study the nature of the exoplanets themselves, both as individuals and as populations, and monitor their host stars for stellar activity. Using both transit and eclipse spectroscopy and photometry in the visible and infrared, ARIEL will explore the properties and atmospheres of approximately 1000 transiting planets, including preferentially warm and hot gas giants, Neptunes, super-Earths, and Earth-sized planets, and seek to understand what planets are made of and how planetary systems form and evolve.​


Towards a taxonomy for planets

ARIEL is a dedicated survey mission capable of observing a large, diverse and well-defined sample of exoplanets around a range of stellar types. It is designed to perform high accuracy transit, eclipse, and phase-curve spectroscopy simultaneously in visible and infrared wavelengths. Its payload comprises a 1-metre class, three-mirror telescope, an infrared spectrometer, and a Fine Guidance System module providing three narrow-band photometry channels (two used as guidance sensors as well as for science) and a low-resolution near-infrared spectrometer.


ARIEL will observe and study approximately 1000 preferentially warm and hot transiting gas giants, Neptunes, and super-Earths around a range of star types, using transit and eclipse spectroscopy in the infrared, and narrow-band photometry in the optical and infrared.

The planets targeted will preferentially be warm and hot (> 600 K) to ensure that their atmospheres are well-mixed and subject to minimal condensation and sequestration, allowing an accurate study of their bulk and elemental composition (from e.g. water (H2O), carbon dioxide (CO2), methane (CH4), ammonia (NH3), hydrogen cyanide (HCN), and hydrogen sulphide (H2S) through to more exotic metallic compounds, such as titanium oxide (TiO) and vanadium oxide (VO), and condensed species). Observations of these hot exoplanets will provide insight into the early stages of planetary and atmospheric formation during the nebular phase and the following few million years.

Transit and eclipse spectroscopy methods, whereby the signals from the star and planet are differentiated using knowledge of the planetary ephemerides, will allow ARIEL to measure atmospheric signals from the planets at levels of at least 10-4 relative to the star and, given the bright nature of targets, allow more sophisticated techniques — such as phase-curve analysis and eclipse mapping — that give a deeper insight into the nature of the atmospheres.

ARIEL will deliver an in-depth catalogue of planetary spectra, characterising molecular abundances, chemical gradients, atmospheric structure, diurnal and seasonal variations, clouds, and albedo measurements. The mission will thus provide a truly representative picture of the chemical nature of the exoplanets studied, and relate this directly to the type and chemical environment of their host stars.

ARIEL is complementary to several other exoplanet missions; potential targets will be identified and studied by a number of important missions in the next decade, including ESA's CHEOPS, Gaia, and PLATO missions, NASA's TESS survey mission, and the NASA/ESA/CSA James Webb Space Telescope. However, ARIEL is the only mission designed for and dedicated to performing a spectroscopic survey of a large, well defined sample of exoplanets.​
Spacecraft:

ARIEL's design builds on the thermal design heritage from ESA's Planck mission, and is a modified version of that proposed for EChO (the Exoplanet Characterization Observatory), a previous Cosmic Vision candidate that was considered for the M3 launch opportunity in 2024 (for which the planet-hunting PLATO mission [PLAnetary Transits and Oscillations of stars] was ultimately selected).

The design has been simplified, and its mass reduced, to meet programmatic constraints — unlike EChO, which also targeted temperate exoplanets, ARIEL will preferentially focus on warm and hot ones, thus requiring a simpler payload. The launch mass of the entire spacecraft is approximately 1300 kg.

The spacecraft is designed with two distinct modules: the Service Module (SVM) and Payload Module (PLM). These two modules are thermally isolated from one another — the SVM sits at the 'bottom' of the spacecraft. Three V-Grooves, composed of an Aluminium-skin/Aluminium-honeycomb sandwich, and three pairs of low conductivity Glass Fiber Reinforced Plastic (GFRP) bipod struts sit on top of the SVM to support the PLM (including the optical bench, the telescope and the instruments). This thermal shield assembly allows the complete PLM to be passively cooled to ~55K (optical bench, telescope and instruments). In addition, a Neon Joule-Thomson cooler allows the AIRS long wavelength channel to be cooled to ~42K.

The PLM comprises an off-axis Cassegrain telescope (with a primary mirror of approximately 1.1 m × 0.7 m) with a third beam collimating mirror, the ARIEL infrared spectrometer (AIRS) covering the 1.95 – 7.80 μm wavelength range, and a Fine Guidance System (FGS) module with three narrow-band visible to near-infrared photometer channels (two used as guidance sensors as well as for science) and a low-resolution near-infrared spectrometer.

The structure of the PLM is based on a horizontal telescope configuration. The complete optical bench and all mirrors will be made out of Aluminium.

The propellant tank is accommodated inside the SVM, while the solar panels, thrusters and high gain antenna are accommodated underneath. ARIEL will use a hydrazine monopropulsion system. ARIEL's Attitude and Orbital Control Systems (AOCS) will be three-axis stabilised and wheel-based, operating the wheels in a narrow angular speed range, away from any peak vibration mode and away from any possible amplification frequency of the spacecraft structure to mitigate the impact of micro-vibrations on the pointing budgets.
​
Payload:


The ARIEL payload consists of an integrated suite comprising the telescope assembly (TA), the ARIEL infrared spectrometer (AIRS), and the Fine Guidance System (FGS)/photometer module, along with the necessary supporting hardware and services. All these units are accommodated inside the cryogenic payload module, while warm payload units are accommodated inside the service module (the FGS Control Unit, the Instrument Control Unit, and the cryo-cooler and Cooler Drive Electronics).

The TA is an off-axis Cassegrain telescope followed by a third parabolic mirror to recollimate the beam, passively cooled to a temperature of ~55 K. It has an elliptical main mirror with dimensions of 1.1 m × 0.7 m — equivalent to 0.9 m circular — a diffraction limit of about 3 µm, and a focal ratio (f) of 13.4.

AIRS is a broad-band, medium-resolution near-infrared spectrometer operating between 1.95 µm and 7.8 µm. The spectrometer is a single module incorporating two dual Offner channels covering the 1.95–3.9 µm and 3.9–7.8 µm wavelength bands, and provides a resolving power of R~30–200 across its spectral range. The proposed detector is a fine-tuned version of the Teledyne MCT (Mercury-Cadmium-Telluride) array developed for NEOCam (the Near-Earth Object Camera). The operating temperature for the detectors is below 42 K, AIRS is mounted on the optical bench alongside the FGS and telescope interface.

The FGS module provides three narrow-band visible to near-infrared photometer channels (two used as guidance sensors as well as for science) and a low-resolution near-infrared spectrometer. The four-channel FGS/photometer will include a Gregorian telescope, and covers three narrow spectral bands spanning 0.50–0.55 µm, 0.8–1.0 µm and 1.0–1.2 µm, and a low-resolution 1.25–1.95 µm spectrometer. Both the FGS and NIR-photometer are mounted on the optical bench.
​
Mission Operations:


ARIEL is the fourth medium-class (M4) mission in ESA's Cosmic Vision Plan. It is scheduled for launch in 2028.

ARIEL will be launched into an (Earth-Moon) eclipse-free orbit around the Sun-Earth L2 point. It will be a large amplitude quasi-halo orbit, as was the case for ESA's Herschel Space Observatory, where the angle between the Sun, Spacecraft, and Earth can be ≥ 30 degrees. From ARIEL's planned orbit, the complete sky is accessible within 3 months, with a source at the ecliptic observable for at least 30% of the mission lifetime.

The proposed launch vehicle is an Ariane 62, a modular launcher with two P120 solid-propellant boosters.

The Launch and Early Operations phase will cover the time until the first Transfer Correction Manoeuvre is executed (within 2 days after launch). It will then take ARIEL up to six months to reach operational orbit, go through spacecraft commissioning and science demonstration phases. Once in its final configuration, ARIEL will perform one manoeuvre per month to maintain its orbit.

A payload consortium funded by national agencies will provide the full ARIEL payload (the complete payload module, including telescope and instruments, and the warm payload units) and will have significant involvement in the science ground segment, while ESA will provide the service module, the integration and testing of the spacecraft flight model, as well as being responsible for the launch and operations.

The ground segment responsibility and implementation will be split between ESA and a nationally-funded Instrument Operations and Science Data Centre (IOSDC) payload consortium. ARIEL data products will be distributed to the scientific community through an ESA-provided science archive. 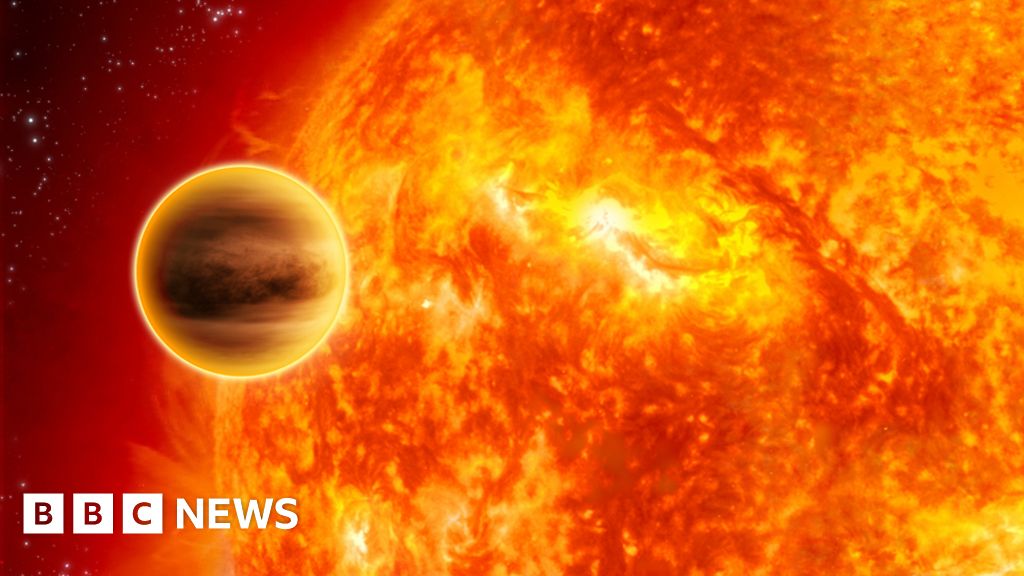 Airbus will lead the construction of the Ariel observatory which will study 1,000 distant worlds.
www.bbc.co.uk

Only eight years now.
You must log in or register to reply here.