I made a little chart giving a general idea of how the DG-IV can survive doing a direct reentry into the Earth's atmosphere and how you can get the result you want. The main benefit of this is saving fuel so and time so you don't have to reduce the eccentricity of your orbit. 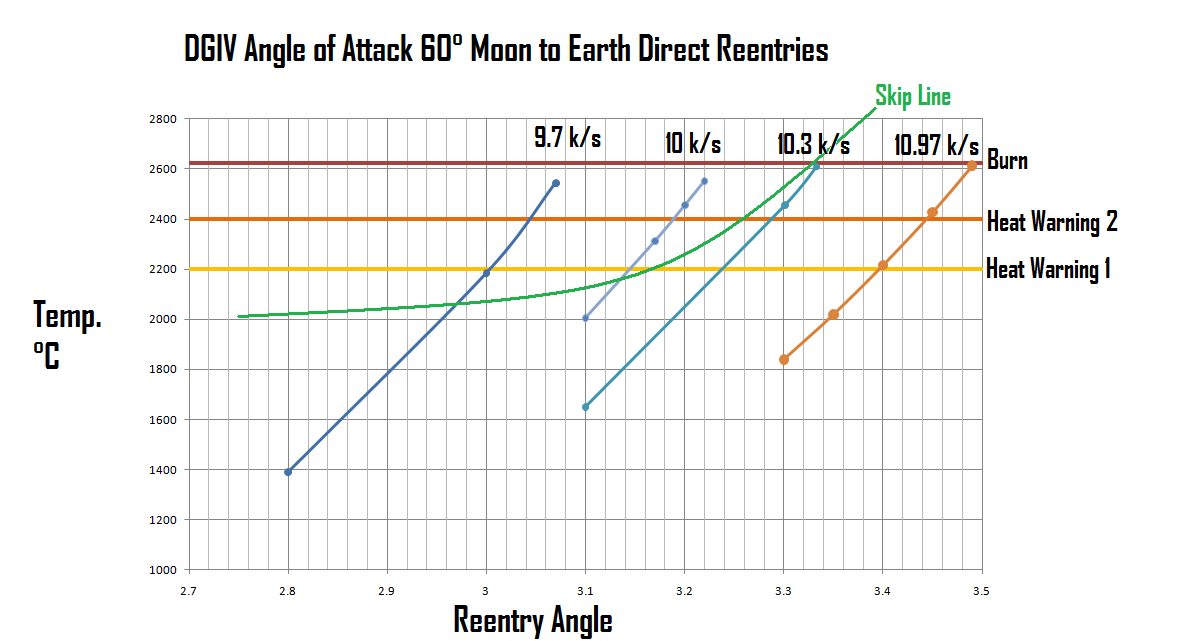 This shows the different maximum temperature reached against what your reentry angle is. Each curve is a different reentry speed. All data was taken from the second and third display of the DG-IV. All entries were made just below the maximum allowable weight

The skip line is not very accurate and shaped based on my intuition. It is 'about' right though and can be used with a margin of error. What it tells you is that if your reentry parameters fall below the skip line you will 'skip' off the earths atmosphere and have to come around for another pass.

(You could plot accurate skip curves for each skip altitude to know exactly how high you would go but that would require a lot more data points.)

This means the approximate maximum speed you could be going and aerobrake in one pass is about 10.2 km/s with a reentry angle of about 3.29 degrees.

It is pretty easy to interpolate to find a good reentry angle for whatever speed you may be going. The higher speeds may skip you back into orbit but it is good to know a reentry angle which will give you maximum braking effect. (Remember you don't always need go up to 2600 degrees!)

This is a little diagram which shows a good way to lower your reentry velocity about 1 km/s or so while maintaining a reentry angle. I usually take care of this while at about 10M altitude and fine tune my reentry angle at around 3M. This will not take you off track of your base if you are already lined up over it. (Be careful to keep the dV in the orbit plane.)

Converted to imperial (i'm most familial with imperial units)

awesome 1st post! have something to try this weekend, thank you.
I

What would the numbers look like if you flew the aerobraking inverted to use lift to keep yourself down in the atmosphere?

ijuin said:
What would the numbers look like if you flew the aerobraking inverted to use lift to keep yourself down in the atmosphere?
Click to expand...

When you reenter the high angle of attack of your craft causes it to stall. You can control the angle and how much stall to maintain a vertical speed which keeps you going down and slowly bleeding off speed.

If you have a high negative vertical velocity that heats you up and you burn or if you get to a low altitude with too high velocity you burn up also.

The reason you skip off at such a high angle of attack at 10+ km/s is because you are going so fast you cannot stall enough to overcome the lift and you go back up.

If you are upside down it may start out alright but all that lift that pushes you back into orbit will be pushing you down into the thicker atmosphere. When you go down so fast you won't have time to bleed off your orbital velocity and you will burn up. 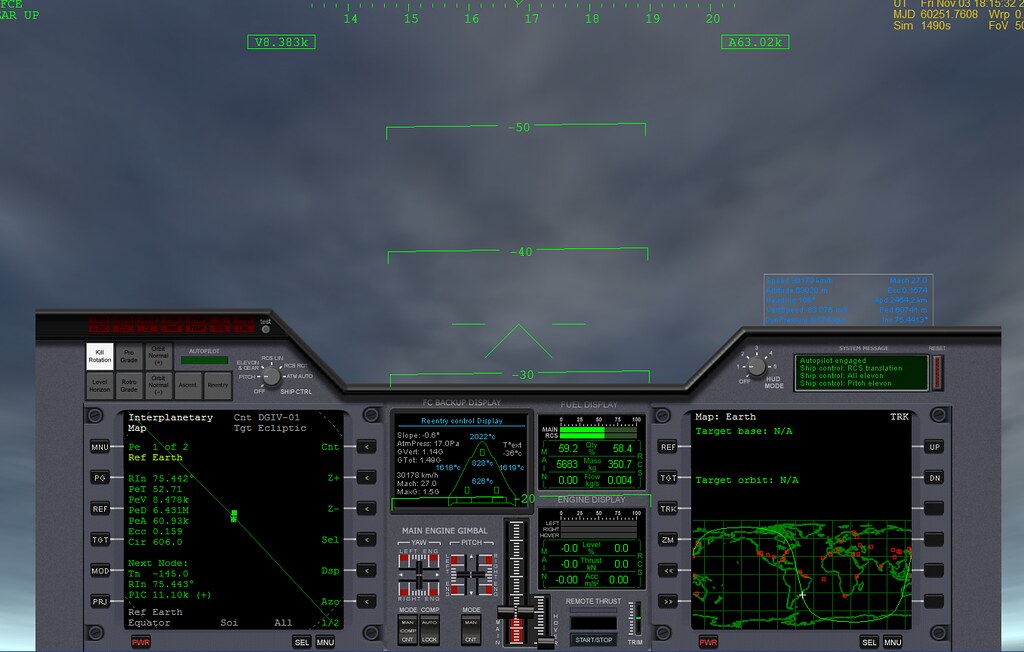 This shows one upside down attempt. I actually made it in from 10.97 km/s down to 8 there. I had to counteract the initial lift with some thrust while inverted. Then it started to work well with the inversion holding down the vehicle just enough as it bled off speed. Then it got worse, if I went straight I had negative lift, if I angled down I had still negative lift. There was no way to radiate any extra heat by changing your angle. I even tried some rolls to reposition myself upright but the wings would burn up.

It was definitely worth trying though Imagine how that would be, coming straight in off of 12 km/s into an inverted aerobraking maneuver then rolling upright to cruise down to base. I need to try again!

I stand corrected. This is pretty awesome: http://orbiter-forum.com/showthread.php?t=5584 And I see how I can avoid burning up on rolling back to an upright position. I cannot get it to work for the DG-IV though. I think mainly because I do not know if or how you can change the CoG to maintain the inverted state.

Thanks I just saw your video and thought it was awesome. It made me install Wideawake

Another interesting thing I found is that the lift created above ~70 km at such high velocities (>~9) does not seem to be affected by the orientation of the ship.

Whether it is upside down or banked at 90 degrees it still has the same response until it becomes 'engaged' in the atmosphere or slows down and you regain some level of control.
Last edited: Aug 15, 2009

That is one usefull chart.

Actually, the iverted re-entry technique works in the DG-IV, you just raise your AoA (as relative to the ships orientation) to reduce lift if you are descending too far onto the Atmo. You'll need to use the trick to get both Aerodynamic and RCS controls active simultaneously in order to do this.

Another option with the DG-IV (or other DG style creaft that can't shift the COG) is to use a low AoA (15 degrees or less), and lower the AoA to reduce descent speed as needed. This is a low drag configuration, so it will take you quite a while to get down to suborbital speeds. Expect around a full orbit from EI to touchdown. The advantage to the low AoA profile is that the AoA can be maintained solely by use of elevator trim, making this less of a "white knuckle constant stick input" trick.

Still, it's a useful chart that can help people understand a glider's re-entry profile.

Tommy said:
You'll need to use the trick to get both Aerodynamic and RCS controls active simultaneously
Click to expand...

Hi, thanks I just read your thread and watched the tutorial. I was having the exact problems you described attempting it with the DG-IV.

What is the trick for having both controls active at the same time?

happy to hear you like my video and thank you for the kind words. wideawake is beyond beautiful, i had to give it a tribute with that video

having both controls at the same time is a small cheat.

another small thing i discovered by accident, hold a maximum position of the elevons (bank, roll or pitch) slow down time to x0.1 and change fast to "rcs rotation" or "rcs linear" that way the elevons will hold their position.
You must log in or register to reply here.

J
Problem XR2 control surfaces turning off during take off