The roll-out of Europe's own satellite navigation system continues today with the gas pedal now fully pushed back for the mass satellite deployment phase to start years later than planned!

ESA and the European Union's Galileo satellite navigation system has been suffering from lack of funding and periods of bad luck with power problems on at least one of the first 4 "in orbit validation" satellites, then thanks to Russian wiring problems on the Fregat upper stage the next two satellites were placed in wrong orbits that took ESA some effort to move them back into partly usable places.

Well, at least the latest launch of the 3rd and 4th Full Operational Capability (FOC) satellites went without a hitch back in March, and the deployment speed is finally going up! Today marks the launch of the 5th and 6th FOC satellites and will boost the constellation up to 10 satellites. Another 4 will be launched this December and early next year on 2 Soyuz rockets, then the Ariane 5 will take over with 3 quadruple satellite launches planned over the next 2-3 years to finish Europe's own GPS.

The Galileo satellite navigation system will consist of a total of 30 spacecraft in three planes in medium Earth orbit, which will each be occupied by nine satellites, and with three spares satellites distributed on the three orbital planes. At an altitude of 23,616 kilometers and an inclination of 56 degrees, the system will provide accurate positioning data to users as far north as 75 degrees longitude.

Although similar in design to the American GPS system and the Russian GLONASS navigation network, Galileo-FOC will be under the control of strictly civilian organizations. Galileo is the first joint program to be shared between the European Space Agency and the European Union.

In January 2010 the consortium consisting of OHB-System GmbH and SSTL was selected to built the first 14 Galileo-FOC (Galileo-Full Operational Capability) satellites of the system. OHB-System will act as prime contractor, build the busses while SSTL will provide the payloads. In January 2012, eight more satellites were ordered.

The little seven did it again! It's coasting in orbit waiting for the 2º burn of the Fregat.

Good to see the Galileo constellation is another step closer to be used by my mobile phone! :thumbup:

Observing the Fregat upper stage with Galileo 9 and 10 manoeuvering into transfer orbit, just 22 minutes after launch 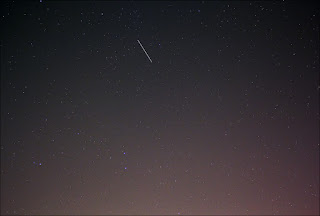 Last night (11 Sep 2015) at 2:08:10 UT, ESA and Roskosmos launched a Soyuz from Kourou, French Guyana, with the new navigation satellites Galileo 9 and 10. The payloads are intended for a circular MEO orbit at an altitude of about 23 522 km

Cees Bassa alerted observers in Europe to the fact that the Fregat upper stage (with payloads still attached) would be visible over Europe during it's initial orbit insertion burn, exiting Earth shadow near 02:30 UT at an altitude of about 400 km altitude while cruising over Germany/Denmark. Engine cut-off for this stage of the launch would be 2 minutes later near 02:31:40 UT

Observing conditions were mediocre at my location: the sky was hazy, and light pollution a problem at lower elevations (it can be seen as an orange glow in the image above).

After exiting Earth shadow near 02:30:00 UT at about 45 degrees elevation in Ursa major, the Fregat stage was easily seen by the naked eye as an object of magnitude +2.

Descending towards the Northeastern horizon the object became fainter, until I lost it in the light pollution and haze about a minute later.

Cees managed to image a developing hazy envelope around the trail low above the horizon (when it was already invisible to me), which is related to engine shut-down near 02:31:40 UT.

A Soyuz is scheduled to launch at 2015-09-11T02:08:10 from Guiana
and will put two Galileo satellites in orbit. The insertion of
the payload into the transfer orbit may be visible from Europe.

The VS12 launch
kit (http://www.arianespace.com/images/launch-kits/launch-kit-pdf-eng/VS12_Launch-kit_GB.pdf)
reports that the Fregat upper stage will shut-down at 23m32s
after launch. This is essentially identical to the shut-down
reported for the VS03
launch (http://www.arianespace.com/images/launch-kits/launch-kit-pdf-eng/VS03-GALILEO-FM3-FM4-GB.pdf),
for which JSpOC has orbital elements of Galileo-FM3
[38857/12055A] while in the 20x23250_at_56deg transfer orbit.

Code:
This orbit predicts a shadow exit at 02:30:05UT when the payload
is above the border between Germany and Denmark. At this time the
Fregat is still in powered flight. The insertion burn is
predicted to and at 02:31:32UT.

It is unclear what visual effects the burn and the shutdown may
have, but observers in Northern Europe are well placed to observe
what ever may be visible.

I was trying to estimate the final MEO orbit when Cees mailed to seesat his
estimation.

Here his estimation of just after MEO insertion orbit (copied from last
post):

Code:
I've taken the freedom to modify a bit the inclination to match press kit's
info:

And here the final orbit estimation:


Code:
Not clear why my TLE (the last one) is about 2 degrees off of RAAN (its my
fault). This is rought estimation taken from #40545 initial orbit and
adapted for this launch.

The VS12 Fregat upperstage with Galileo 9 and 10 was seen from site
4171. The object was easily picked up at eclipse egress. The
brightness then noticably decreased and was lost visually at about 10
deg elevation. The track was close to my 84001 estimate.

Pictures taken with the DSLR show the brightness decrease, and then
what appears to be venting: https://db.tt/jyLQ5bAX

The video camera also caught the Fregat upperstage. Using a 12mm F/1.2
lens, I get these measurements:

Code:
Starting with the 84001 orbit estimate, I get this approximate orbit:

A source within ESA tells me this was not venting, as that happens only much
later in the timeline. So this must have been something related to engine cut-off.


Camera Used: Unavailable Unavailable
Exposure Time: Unavailable
Aperture: f/2.8
ISO: 4000
Date Taken: 2015:09:11 20:53:51
Details:
Last night we again had a very weak aurora that was barely visible to the naked eye. But the airglow was quite intense and faintly visible. At 2:31UT (4:31 CEST) the Soyuz spacecraft appeared over the eastern horizon moving towards Mars and Venus low over the horizon and right through the beautiful morning zodiacal light which was well visible to my eyes.