I'd like to see this feature available on the current client versions. It's very useful, specially for small areas where you just want to place a mesh (AMSO rocks) or a landing pad.
Much easier to do it with a config file than doing permanent changes to the tile tree.
Any reason why it was dropped / not included in D3D9?

While the visual part of it is standard code, the collision part is a hooking of Orbiter's internals, and can therefore be considered a hack. I guess this is the reason why the code was never included in D3D9.

That's unfortunate. Any way to reconsider that decision ? Would you mind ?
Should I post on the D3D9 forum about it?

It is not my decision to make.

I have presented the code and a binary already, but I can't put it into the D3D9 repository, because I don't have commit access there.
There is nothing more to do with the code, besides maybe a more robust parser. I guess the only thing making it not worthy is the use of assembler in it to hook the Orbiter function doing the collision work. Can't change that without help from Martin, though (i.e. API extension).

The whole thing was meant as a demonstrator to show the concept. The concept is shown, the demonstrator works as good as it gets, so now it is in the hands of others to incorporate it in their work. Or not...

BTW: Bitbucket decided to kill Mercurial, so my repo is not there anymore. So the code in question now lives here: https://osdn.net/projects/orbiterso...86c65d1f9bb11bb6e10a8a956d5690c7f/?format=zip

Do they provide at least an option to convert it to whatever-they-use-now (git I assume)?

No, you had to do everything manually. Not only code, the whole projects were deleted, so you also had to manually transfer tickets and whatnot. It was an absolute asshole move of them, so I decided not to use their service anymore. If I want to use git with a big company behind it, I can always use github, right?

I asked to this to be incorporated into D3D9: https://www.orbiter-forum.com/threads/d3d9client-development.16787/post-570851
Lets see if it gains some traction...

Even as a hack, this is one of the more useful efforts I have used in Orbiter. Would love to see it added to 2016 and D3D9.
A

I realised that I was not using the new Mars textures properly. The adjustment to level 16 makes it much more obvious. Now, I thought about it and this is probably cheeky, but I made a depression so that I could expose one of the underground avenues... There's two flattens here, one for the Square with the swimming pool, and the other to make a depression...

Using the new feature for base flattening works like a charm, thanks!
However, when I tried to experiment with trenches and wells, I hit several problems.
I use the following record (on Baikonur, near Site 70):

When Orbiter puts a hill in these coordinates, and I place a vessel on top of the hill, vessel's coordinates are different:

I suspect my other "flattened" bases are also mismatched - I had to increase radius for the flattening more that I thought would be needed - probably their centres are quite offset.

But second problem is even bigger. Even with dropoff 1, the inclines of the hills (I moved to hills from wells for experimenting, as they are easier to see) are still really shallow - did not get anything sharper than ~45 degrees. For my purposes, I need them - the closer to verticals, the better. Well, correction: I finally did manage to get sharper angles - by elevating the hill to the very impractical several kilometers... leading to the next problem:

Finally, the killer: I could not get hill size parameter smaller than 600 by 500 meters. Even 500 by 500 is just ignored. And the shape of the base of the hill is... well, kinda approximate - and HUGE! For launch pad trenches, the needed precision is down to meters, but, more importantly, size should also be down to meters: silo well is only about 10 meter in diameter (and 40-50 meters deep).

I don't know... I see screenshots of some quite sharp and small dugouts in this thread... I noticed they all seem to be on Moon and Mars. Is it maybe the Earth model being more complex, and getting in the way? I understand that I probably trying to use the feature for what it was not intended for. But for these types of launch facilities on Baikonur, flattening the area is only the "invitation to negotiations": the next "must" step is to prevent flame trenches and silos from "filling with the earth" as surface elevation is loaded...

I don't think it is possible to dig a well with (perfectly) vertical walls, as planetary surfaces are meshes so you will always have some sort of slope.

Anyway, tileedit allows you to move individual surface points up and down, and that might be enough for your needs.

Will this approach force users of my addons to always use fixed level 19 surface?

igel said:
I understand that I probably trying to use the feature for what it was not intended for. But for these types of launch facilities on Baikonur, flattening the area is only the "invitation to negotiations": the next "must" step is to prevent flame trenches and silos from "filling with the earth" as surface elevation is loaded...
Click to expand...

I agree. The flattening feature is just that: something to easily flatten the terrain that is already there. If this terrain is low-res, of course the flattening is also low-res. It is certainly not a terrain definition language.

If your addon needs high-res terrain, you have to author this outside of the scope of the flattening feature. I.e. you have to use tileedit or similar tools to create it, then create a concept how you can distribute it.
Perhaps there is a tool that automatically extrapolates high-res tiles from given low-res areas. With that, you could just "blow-up" the area you have in resolution, then use the flattening feature to define finer terrain features. The new tree format is there to allow high-res in only certain areas, so there is no need to force users to fixed level 19 global surface.

You can flatten a large area to create the bottom of the trench (low area).
Then add meshes on top to create trench walls, the elevated pad and the surrounding terrain, much like it was done in 2010.
A textured mesh will be of much higher resolution than LV19 terrain, so that's the way to go

Hey any of you guys looking at Jesero Crater. The mars rover landing not far off and issues with the LZ's for Artemis as well

Adding to the previous suggestion.
When you place structures over terrain that can't be changed (or has low resolution), you draw what's called a skirt.

Here's an example from back in the day, when you could add buildings to Google Earth: 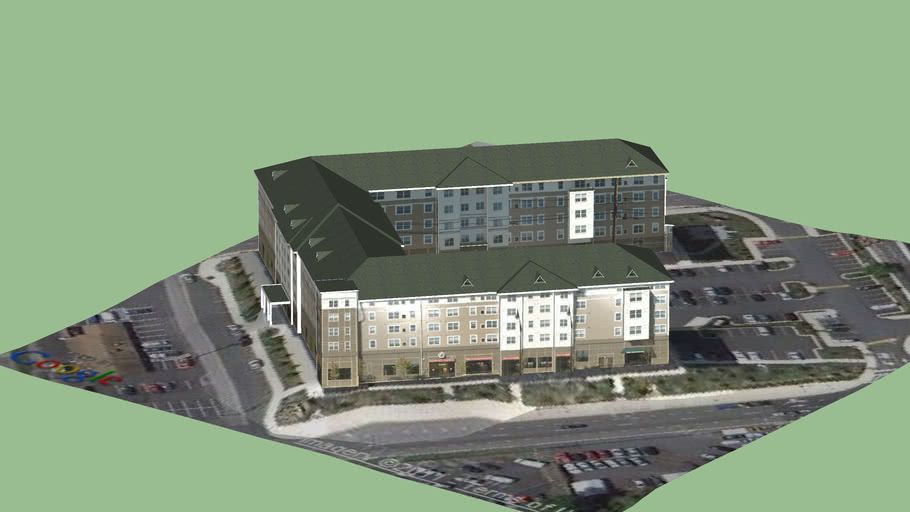 Notice the garden/roads around the building, on the left you can see they are actually part of the model.
On this photo the terrain is slopped, but the principle is the same if it was flat.

I have just, thanks to BrianJ and 4throck, discovered and learned this new possibility of flattening a zone, much more easily than with tileedit and the "elv_mod" files.

The area at the origin: there is a bump (red arrow) And here is what it gives with the "flt" file: Now I will do something more suitable ...

there is a bump (red arrow)
Click to expand...

It looks very realistic for a tropical forest airstrip, no problem at all for light aviation, remember than in real life runways don't have to be perfectly flat. Birmingham, UK, is quite famous for being bumpy, and this is a runway used by jets such as 737s : 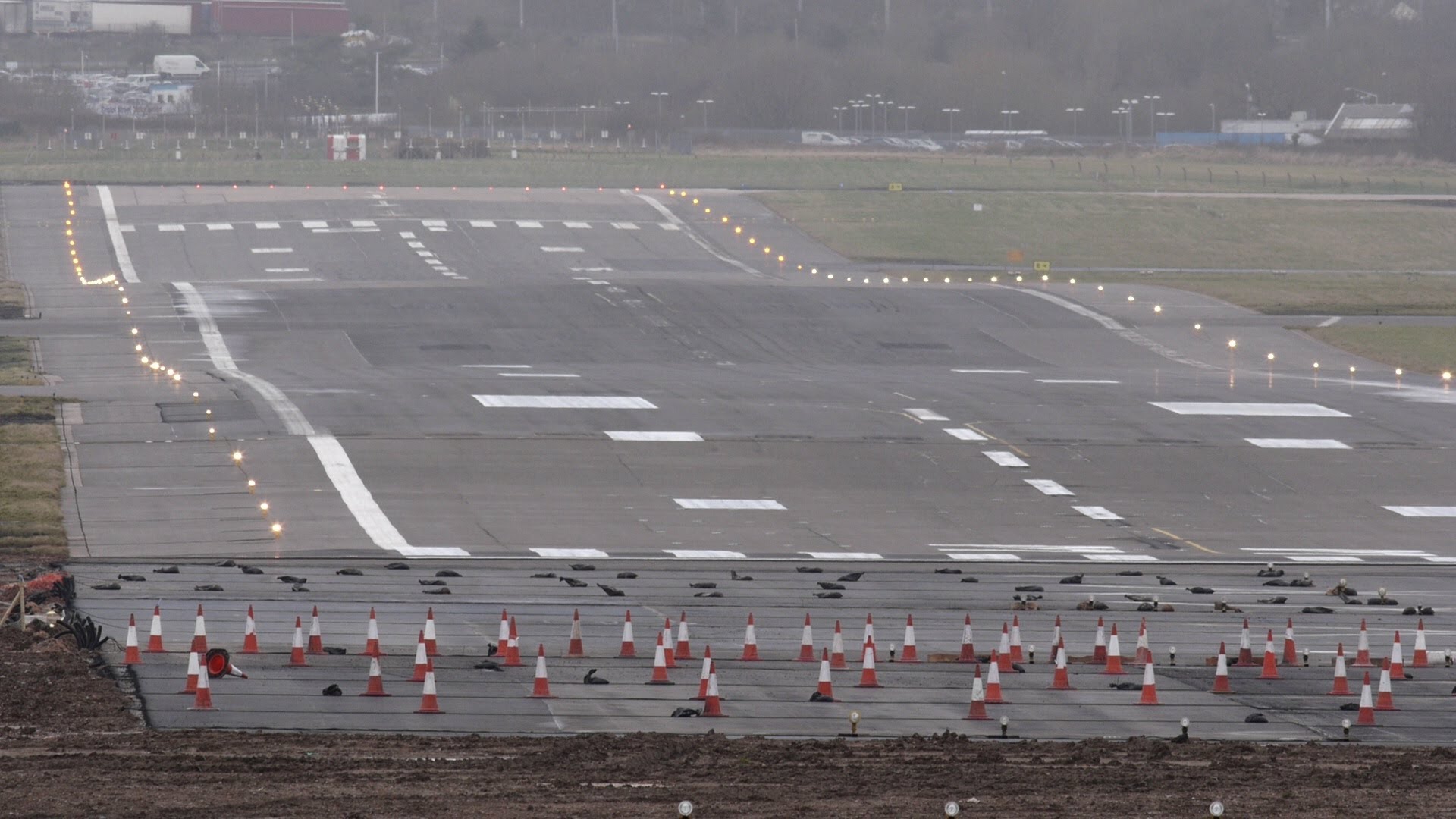 You can check terrain elevation on Google Earth (for Windows), in case you doubt Orbiter's values. Google Earth should be more accurate.
For the Saul runway, Google Earth's profile shows a more or less constant slope from 204 to 229 meters.

I guess Orbiter's bump is because of insufficient terrain resolution, but represents the correct altitude increase. As long as the airplane is able to takeoff and land, no problem.
But if it crashes then simply flatten the area to the average altitude of 217m
You must log in or register to reply here.
Share:
Facebook Twitter Reddit Pinterest Tumblr WhatsApp Email Share Link
Top