Not sure I'm doing this correctly. burning a ton of RCS fuel playing with it. When the checklist says "Mnvr to place +Xsc in orb plane (0 deg yaw)", what am I supposed to do? Just maneuver in the Y axis until it's 0? Maneuver until spacecraft is facing forward with 0 yaw? After running the procedure I'm not sure what I'm expected to see. Thanks.

In the last step of the ORDEAL initialization you are fine tuning the pitch shown on the FDAI to the correct value from V83. That is less accurate when you do it at a large yaw angle, as the pitch scale is compressed there. So all you really have to do in this step is be near 0° yaw. Doesn't have to be precisely 0 and roll and pitch don't matter. Pitch would maybe matter if you were not using V83 to calculate your angle above the local horizontal. There is a SCS ORDEAL initialization procedure that has you point the nose of the CSM at the horizon and then slew the ORDEAL to 0° pitch. But using the CMC the only constraint is that you are close to 0° yaw for this. Which you are probably anyway, so no need to do any maneuvering for this step.
T

Indy, while kinda on topic, I wonder if you have any thoughts on the apparent quirk of PGNS vs AGS with respect to ORDEAL, in light of the following note from the Apollo 11 debrief:

ARMSTRONG: As we set up the ORDEAL, we got back to our favorite argument. That is, what is right to set in the ORDEAL - the AGS or the PGNS, when you're at nonzero yaw? I guess we believed that it was the AGS that was right. We set it in and as it turned out, it was right and the PGNS was wrong. By about 40 degrees or something like that.
Click to expand...

ALDRIN: The PGNS was wrong by 40 degrees.
Click to expand...

ARMSTRONG: That's an interesting one, because you can get either answer depending on who you ask; I still think that today. We at least proved to ourselves that the AGS was the correct one.
Click to expand...

The main reason I bring this up is that I think I too saw this when activating the LM recently, namely the LM was well off the Z axis, and R3 of V83 and AGS 277 differed quite a bit, but having set the ORDEAL to the 277 value, when I eventually undocked and yawed to 0, the 277 figure proved to be accurate. It could of course be my imagination.

I've seen the same, on Apollo 10 and 11, CMC and LGC. I don't even think this is a bug in the AGC software. It might just be that the theta angle it shows in R3 in V83 isn't actually the pitch angle you need to use for the ORDEAL when you are at a larger yaw angle. So more of a coordinate system difference than anything. I can't find anything about this issue in MIT documentation. But for Apollo 12 they moved the ORDEAL initialization to just after undocking, when they had just maneuvered to 0° yaw. Certainly no conincidence. I have to look into this a bit more, maybe I am finding something.

I put the PGNS and AGS calculations for the theta angle (R3 of V83 in the PGNS, address 277 in the AGS) in a MATLAB script and let it plot the difference. This is using the Apollo 11 attitude of the LM when they were doing the ORDEAL initialization, still docked, about 300° yaw angle and close to 0° in roll. Their pitch angle was 200°, but I let it plot the theta angle as a function of IMU pitch angle. 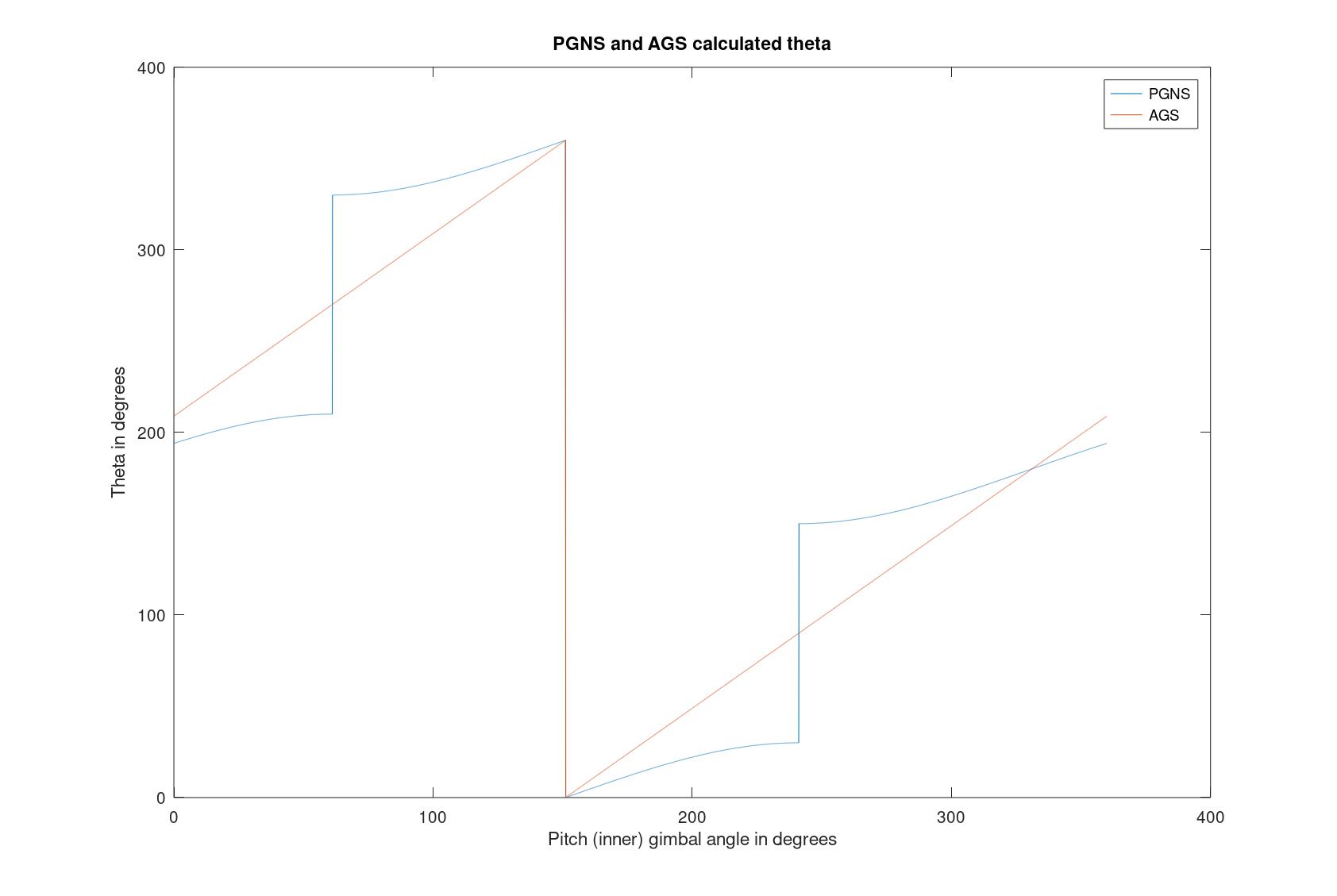 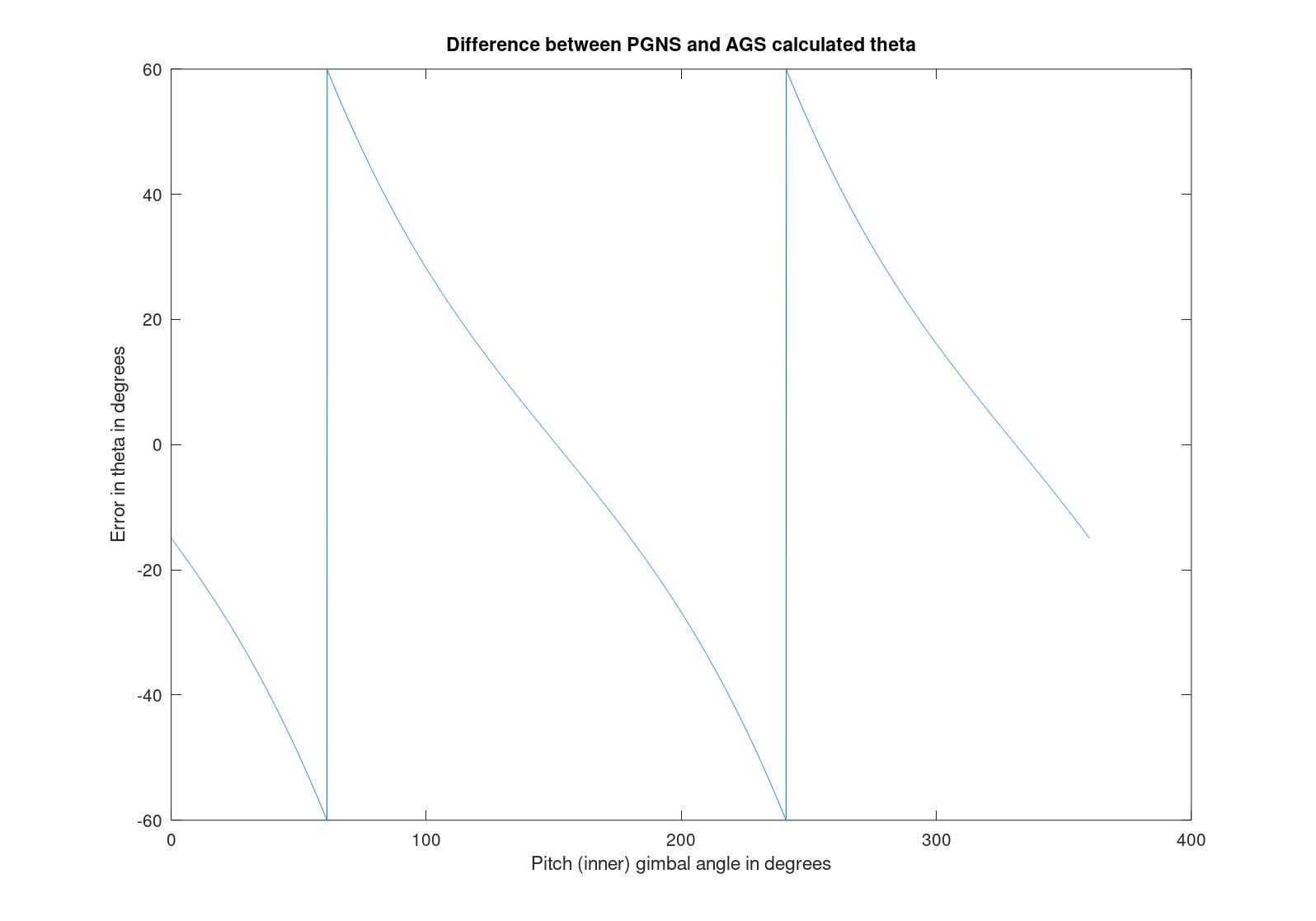 So there is a difference of up to 60°, as much as the yaw angle. At 0° yaw there is no difference. There is a jump of 120° at the points where the AGS theta is 90° and 270°. This seems to be due to a difference in the definition of the angle. For V83 if the vehicle is pointing above the local horizontal the angle is always between 0° and 180°, otherwise it's between 180° and 360°. The AGS defines the angle as the "in-plane angle between Z body axis and local horizontal". For the PGNS the angle isn't in-plane. So I think it's simply a difference in definition of the angle, not a bug in the V83 code or so. I do think that the AGS definition of the angle is more useful for the ORDEAL initialization. So if you happen to have an AGS onboard, using that instead of V83 is correct. In the CSM you should definitely be close to 0° yaw angle or you get a random error that can be as large as your yaw angle.

I think the theta in V83 wasn't really added for the ORDEAL. Instead it shows the elevation angle of a target you are pointing to. That is how V83 was used during the Apollo 7 rendezvous. You point the CSM (or LM) at your target and V83 gives you the elevation angle of that target. And that works without the AGC having a valid state vector for your target vehicle, e.g. if your sextant has failed and you can't do any marks. From the Apollo 7 rendezvous procedures, optics failure backup technique:

The method for determining the TPI maneuver will be as follows:
After NSR the SCS pulse mode will be selected and the commander will control attitude to maintain wings level and boresight the COAS on the SIVB. The event timer will be set to 52 minutes and holding, awaiting the start of the TPI backup sequence. The CSM pilot will monitor elevation angle from V83 and when 20.0 degrees is reached, the event timer will be started counting up. This will establish the time of TPI and the measurements 5 and 8 minutes prior to the burn.
Click to expand...

Thanks for running that down, Indy, very interesting.

I haven’t tried Apollo 7 yet, but I guess I should, in order to get a better understanding of V83, particularly since I had assumed it would not return viable information without a valid SV of the other vehicle.

Thespacer said:
particularly since I had assumed it would not return viable information without a valid SV of the other vehicle.
Click to expand...

It uses the attitude of the IMU to calculate the direction in which the vehicle is pointing. Of course to calculate anything relative to local horizontal it needs a state vector of your own vehicle, but not the target. For R1 and R2 in V83, range and range rate, it does however need a valid state vector for the other vehicle.
You must log in or register to reply here.
Share:
Facebook Twitter Reddit Pinterest Tumblr WhatsApp Email Share Link
Top