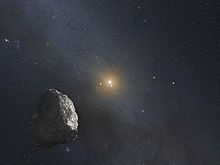 New Horizons Extended Missionfor Obiter Spaceflight Simulatorby boogabooga
The Kuiper belt objects included in this mission were put together using Piper's wonder MPC Database Asteroid Viewer and Exporter v2.0.3:http://www.orbithangar.com/searchid.php?ID=1436All credit for these objects goes to Piper. Thank you, Piper.Â
The MPCORBcr.DAT used by the program was downloaded on July 28, 2015 from the following source:http://ara.roma.it/ricerca
Â Requirements:http://www.orbithangar.com/searchid.php?ID=6809http://www.orbithangar.com/searchid.php?ID=1477http://www.orbithangar.com/searchid.php?ID=4595
Thanks to Piper, Castorp, and BrianJ.Â
Scenario Briefing:July 30, 2015.Two weeks ago, the New Horizons probe captivated the world with stunning images of the Pluto-Charon system.Â However, the mission is not over yet! New Horizons will now enter an extended mission to explore a Kuiper beltÂ object (pending budgetary approval, of course). In the summer of 2014, several potential targets were identified byÂ no less than the Hubble Space Telescope. As of July 2015, there are two finalists. Their Minor Planet Center designationsÂ are 2014 MU69 and 2014 PN70. A third potential target, 2014 OS393 has already been eliminated as a candidate but it isÂ included here anyway. You can try to target it, if you wish. Your delta-V budget is 130 m/s. Next month, Alan Stern isÂ expected to give his recommendation to NASA as to which KBO New Horizons should visit. Bases on this Orbiter simulation,Â which would you recommend?